A Big Thank You - and - Ann Sexton Live At The Wilton

After the disappointment felt by everyone when Marvin Smith was taken ill and had to cancel his concert last November, we felt like calling it a day with regard to live artists at the Wilton’s Soulful Sessions.  We continued with the event and, thanks to all who attended, you turned the disappointment into a great success, and helped us financially to recover some of our losses.

We would like to thank all the people who attended, with a special thank you to those who refused their refunds, telling us to put the money towards next year’s event, and because of your support, we have decided to give it another go.

Let’s give Ann a welcome she will never forget, with a Wilton capacity crowd that, no doubt, will know more about Ann’s recording career than she can probably remember herself.

Ann’s sets will include her well known songs from the 70’s, deep and uptempo classics that she recorded initially for David Lee’s Impel label and later for John Richbourg’s (R) Seventy Seven label, something for everyone’s taste. We have asked Ann to perform something extra special, her very first recording that she cut way back in 1967. She was the featured vocalist on a track cut by Elijah and the Ebonies titled “I Confess”, a great ballad issued on the Gitana label, cut in Ann’s hometown of Greenville, South Carolina. On this release she was featured as Mary Sexton and must have been in her late teens when this recording was released. We are so pleased and privileged that Ann has agreed to perform this song onstage at the Wilton for the very first time in Europe since she recorded the song all those years ago. To make sure we’ve covered all the bases, Ann will perform her latest 2010 release “Rising Up”, a fantastic uptempo soulful house track.

Tickets are now on sale at £20.00 or online at £21.50 at www.wheatsheaf.com/allnighter – watch the Soul Source events guide and the Wilton’s pages on Facebook for updates. 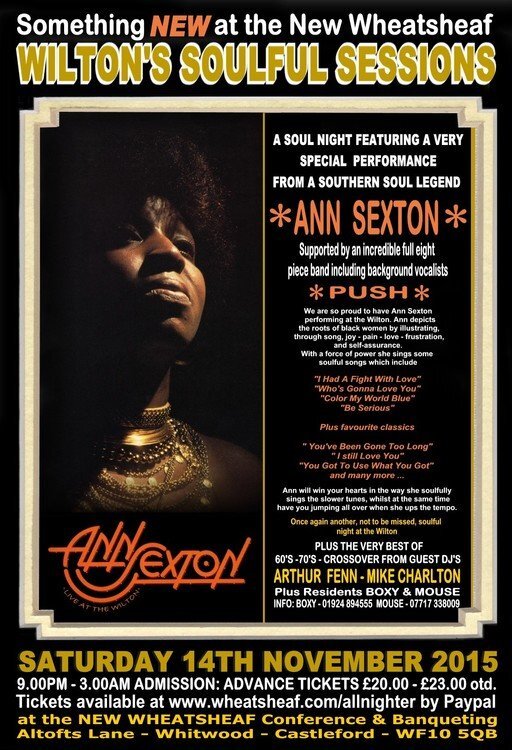 We are so proud to have Ann Sexton performing at the Wilton. Ann depicts the roots of black women by illustrating, through song, joy - pain - love - frustration, and self-assurance. With a force of power she sings some soulful songs which include:

Ann will win your hearts in the way she soulfully sings the slower tunes, whilst at the same time have you jumping all over when she ups the tempo.

Once again, another not to be missed soulful night at the Wilton.

Ann Sexton at the Wilton update.docx