what its all about — togetherness!

The people of the city, and those who have engaged with it know it is a city of innovation — forward thinking, responsive, inclusive and open-minded.

Architecturally speaking, one commentator wrote, “Manchester ... is the capital… the people know their geography is without equal. Their history is their response to it"

Musically, the Manchester European Soul Weekender (MESW) is also a response to the space of the city, the innovation that the city space allows and the musical history that it prides itself upon.

The coming together of people from different cultures, playing mod and blues, rare soul, popcorn, oldies and mid-tempo in a minimal city-centre bar was a joy. Alongside the open-minded European festivalgoers, eager to experience new cultures, dedicated soulies turned a place into a space, filling it with passion and possibility.

One of the DJ’s asked to play that day was Liam Quinn. In the weeks to come conversations were had and the following words were mentioned, “why don’t we do this as a weekender, bring over the BEST European Soul DJ’s to Manchester — bring them to the people, all together, for one weekend?” Ideas turned into plans and before we knew it was happening. Emails were sent, phone calls made and everyone just said YES! From thereon in, it’s been noting but an experience and experiment ever since.

The festival prides itself a number of factors — bring fresh sounds to the city, mixing genres and DJ in a progressive fashion and using spaces and venues that break from the traditional, site specific norm. Equally, it’s about representations and mixing old with new. First on the list in 2011 was Malayka, specifically because there isn’t enough female representation on the scene. In fact, each year, the first DJ’s shortlisted are female

The first weekender in 2011 was held at the Palace hotel in Manchester — in the Grand Ballroom, and in the spirit of the city it included old and new, having the lads from the Twisted Wheel play along Europe’s finest, on the biggest stage I’d ever seen.

Along the way, of course there are hiccups. As we cut our teeth on the weekender planning front, we booked a room that didn’t have a dance floor and had to pay thousands at the last minute to get one in, then we were held to ransom on delivery (2 hours before the event opened, to a cash payment or they’d not finish putting it down) but its all added to the charm of the event for all involved. And this appropriation of space is essential to the weekender — to make spaces function in another capacity, and to let people see and experience different aspects of the city — I’ve never been in that room since, and I doubt I’ll ever again get the chance, but that’s what its about!!

Marc Forrest got lost and locked into a corridor that didn’t lead anywhere, I set the fire alarm off, and big Christian from Sweden went into the basement under the stage and into the bowels of the city, missing his DJ spot! But he came back, covered in cobwebs and blew the roof off the palce, drank all the beer and then flew home, 24hr turn around because he had work the next day and his Soulastatic allnighter party in Sweden the night before

The second year was just as interesting. Opening the event was the Greatstone lads — a massive part of the soul scene and so important to the city in a bar in the Northern Qtr. We tried our hand at an allnighter, to mixed reviews on the Saturday and on the Sunday, found our spiritual home at Jabez Clegg. An old converted church, at the opposite end of the city, the space and floor was amazing (it had its own wodden floor, fancy that!). All rounded off by the now infamous “chillout Monday session” on Wakefield Street, which each year gets better and better — the highlight of the weekend.

After the big Sunday events, the Bank Holiday Monday is double decking, mixing Europeans with UK DJs for 8 hours of musical bliss, playing to soulies, progressive thinkers and B-boys. Watching soulies dancing with B-boys is amazing, and the appreciation for both camps typifies what its all about — togetherness!

This year looks set to be the best yet — a whole host of fresh new European DJ with some of the UK’s finest including Andy Dyson, Keith Money premiering alongside some long time supporters and favourites, Dave Ripolles and Dave Thorley.

Furthermore, we’re pushing it boundaries a bit with Brett Franklin and Chris Morgan playing left-centre obscurities coupled a the usual acknowledgement for local quality. This year, we're giving the new young lads at The Black Bee Soul Club a platform to do their thing, plus, Derek and Carms from Con.soul and Yorkshire's star man Azza who is one of the finest young soul DJ/Collectors around. 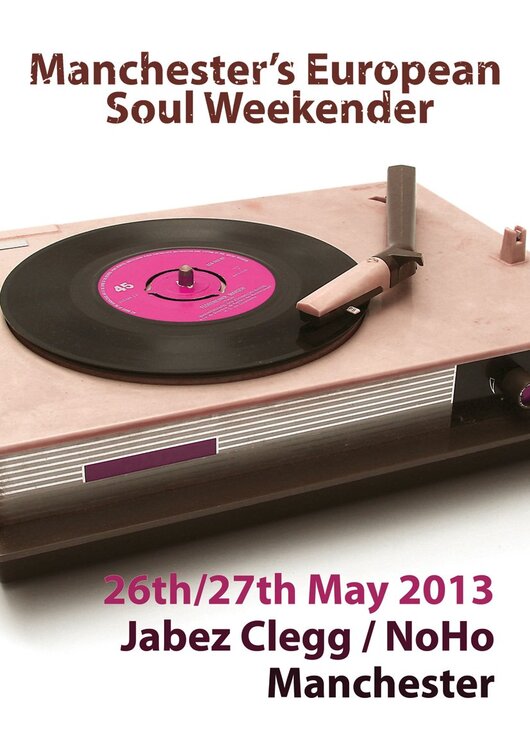 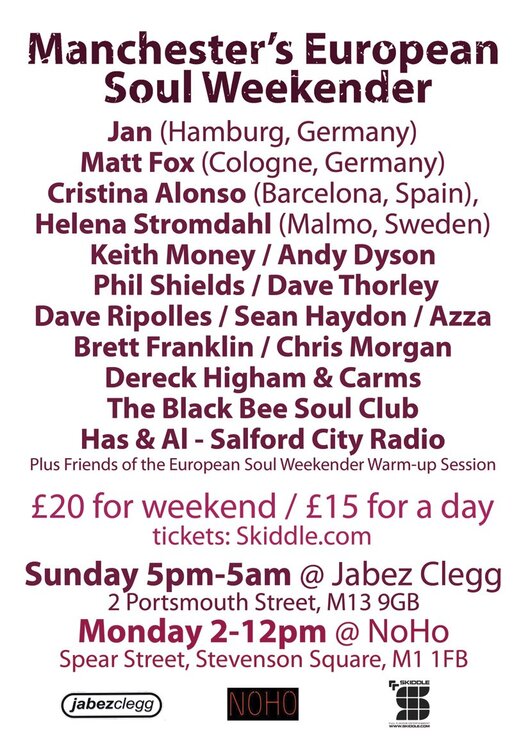