One of the country's leading all-nighters celebrates 15 years

December 6th, 2003, the start of a journey for Marcelle and Chris Waterman.  This was the date for the very first New Century Soul Club all-nighter.  The Club’s name being taken from the venue, New Century House which was part of the CIS building on Corporation Street in Manchester. 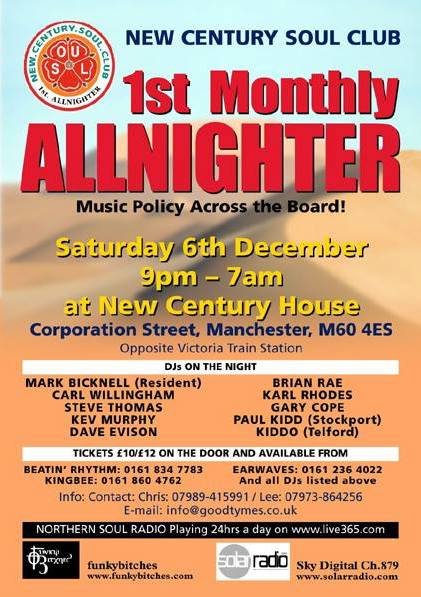 Fast forward to November 24th2018 and the club will be celebrating 15 glorious years. 15 years in which the club has moved home several times. Venues such as Wulfrun Hall in Wolverhampton, Queens Hall in Burslam, Air & Melodies in Birmingham, The Rocket & VSMC (Marble Arch) in London, Steam in Crewe, Maxims in Wigan, The Stables near Wolverhampton, Radcliffe Civic before finding a new home at Bury Town. 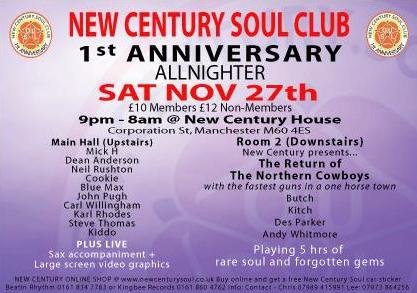 The club has over the years featured the very best Djs in as many as three rooms.  The main Room featuring the best in quality oldies and current spins. A second room used to showcase an alternative to the main room with many Djs featuring lesser known and underplayed records.   A Modern Soul room has also featured over the years at various times, promoted by the likes of Neil Rushton and Baz Maledy.  Many Djs have over the years had their big break at New Century, given a larger stage than any soul night could give them with many going on to become household Djs.

There have been many memorable nights at New Century none more so when Chris and Marcelle have showcased some of the artists we revere.  The Flirtations, Melvin Davis, Ronnie Walker, Nolan Porter, Yvonne Vernee, Bunny Sigler, The Four Perfections, Fabulous Peps & Willie Walker have graced the stage at New Century.

Today, Chris is still very much part of the fabric although he has taken a bit of a back seat leaving the promotion to his better half Marcelle with Andy Dyson helping out with the DJs. 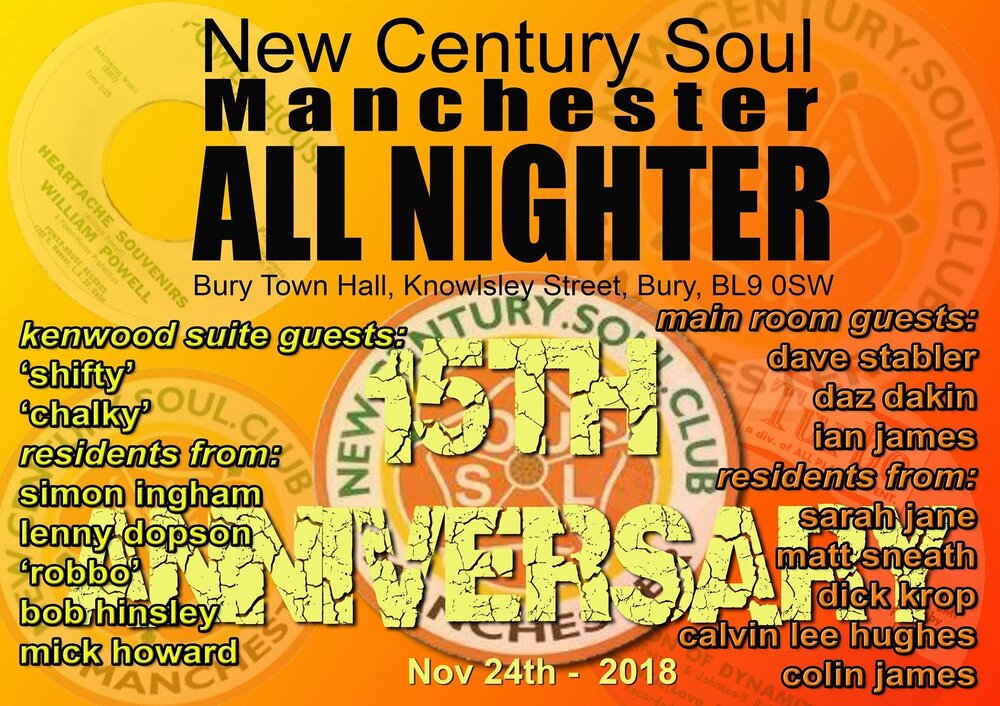 An Elizabethan Room resident line up of Andy Dyson, Sarah Jane, Calvin Lee Hughes, Matt Sneath, Colin James and Dick Krop offer the perfect blend of age and experience with youth and enthusiasm giving dancers and chin strokers alike the very best in todays Northern and Rare Soul, classics to lesser known and in some cases unknown soul music, all the Djs given carte blanch to play whatever they like. To help celebrate the Club’s 15thAnniversary they will be joined on the night by Dave Stabler, Ian James and Daz Dakin to give us 9 hours of quality music.

Tucked away in the Kenwood Suite, hosted by Simon Ingham, resident Djs Bob Hinsley, Robbo, Mick Howard & Len Dopson will be giving dancers and collectors a chance to hear something different.  All Djs relish the chance to play something you don’t always get the chance to play at mainstream venues or the main rooms.  For the Anniversary “Shifty” will be making a rare appearance behind the decks since his retirement as one of the country’s top Djs.  I myself (Chalky) will also be making a return visit to the Kenwood Suite since I took a step back from Djing and other involvement with promoting a few years ago.

The balcony which overlooks the main room supports a very busy record bar with top dealers in attendance.

We have all the ingredients for another memorable night and we hope you can come along and help Marcelle and Chris celebrate 15 great years on the 24thNovember.

The venue is Bury Town Hall, Knowsley Street, Bury, BL9 0SW.  Door tax is £12 and the night will rum from 9pm until 6am the following morning.