Playing at Brighton, London , Manchester, Newcastle and Norwich, you can read full details below

"Soul Searching" brings you the freshest new soul talent from around the globe for a chance to see the soul stars of tomorrow today.

Ben Pirani and the Means of Production hail from New York, USA. Their Daptone Records distributed debut single "Light of my Life" when they were called 'Benjamin and the Right Direction' changes hands on the Northern Soul scene for hundreds of pounds. The follow-up single "Not One More Tear" is a classic Northern Soul stomper of the highest order. Signing to Colemine Records, Ben Pirani released his debut album "How Do I Talk To My Brother?" at the end of 2018. These dates will be the first UK shows ever

Laville is the first new male solo artist signed to Acid Jazz Records since Jamiroquai. His first two singles "Easy" and "Thirty One" have created a buzz on the soul scene and these will be his first UK tour dates.

Mali Hayes has received radio support from Gilles Peterson and Jamie Cullum for her jazzy-neo soul sound and has supported Bilal, Blue Lab Beats, Sons of Kemet and more.

'A really great new British female vocalist from Manchester..
She's got a real un-flashy kind of approach which I really like. Kind of a milder Jill Scott / Erykah Badu, definitely one to watch."
Jamie Cullum - BBC Radio 2

"I was fortunate enough to play demo's on my shows here at the BBC by Amy Winehouse, Lily Allen, Erykah Badu and Jill Scott. All premiers. And this is another one I think I'm gonna be proud of in a few years. Remember the name, Mali Hayes"
Gilles Peterson - BBC 6 Music/Brownswood/Worldwide FM 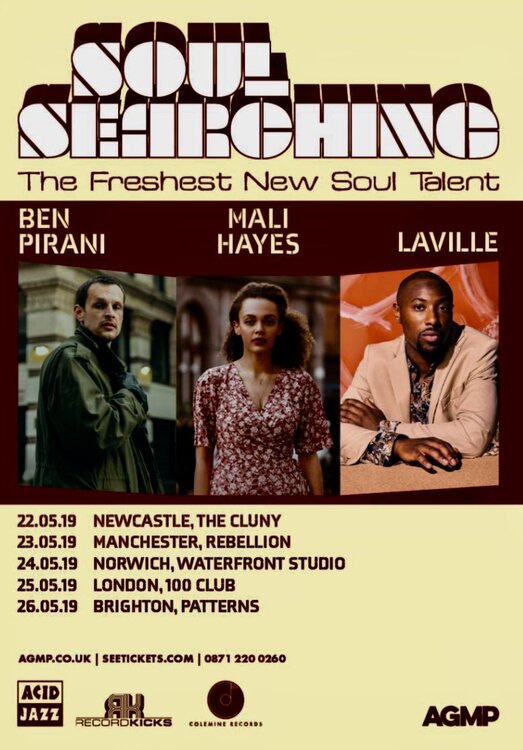