The eagerly anticipated follow up to ‘ONE LOVE’, which was last year’s number one independent soul album of the year, is soon upon us.
‘ABSOULUTELY’ is an album described by Cornell as ‘Songs that came through my Soul and out of my Heart!’
No sales pitch required - suffice to say it’s all killer - no filler. Eight original songs and two classic covers by our heroes Curtis Mayfield and Marvin Gaye (Mr Gaye’s heavenly spirit filled the room when CC & Co laid this one down!)

San Francisco, CA – Cornell “CC” Carter has been gracing stages and entertaining thousands of fans with his signature sound around the world for many years. He is known for his phenomenal stage presence, his high-powered audience engagement, and his extraordinary and dynamic vocal skills. CC is now set to announce his brand new 2019 album ABSOULUTELY, scheduled for release by Izipho Soul Records on CD October 4 and then worldwide on all digital formats on October 18, 2019!

The album’s first single “I See Love” was released August 9 and has received rave reviews. CC describes ABSOULUTELY as an album full of “songs that came through my Soul and out of my Heart!” It includes two classic cover tracks delivered in CC’s signature soulful style, “We’re A Winner” by Curtis Mayfield, and “Come Live With Me Angel” by Marvin Gaye. Cornell and his main Producer Kirk Crumpler received tremendous contributions from other talented musicians including his Mentor and Grammy winning Producer Narada Michael Walden, Eddie M (Sheila E) on Saxophone, Rich Armstrong (Tony Toni Tone, etc.) on Trumpet, Brian Braziel on drums, James Henry on Percussions, Dave Shul, and Larry White (Bobby Brown) on Guitar along with Cam Perridge who also was the Engineer for ABSOULUTELY!  Additional vocals were provided by featured artist Naté Soulsanger (on the song “Morning Touch” produced by James Day), Niecey Robinson, and mentor Larry Batiste.

Cornell’s strong love for music developed when he was a young man growing up in a San Francisco home chock full of Jazz, Blues, Funk, Soul, and Gospel, which has been the inspiration for his creativity and songwriting. He co-wrote and produced his internationally acclaimed 2016 album In The Moment with co-producer Kirk “KC” Crumpler, who has produced various award-winning artists. A collection of 13 diverse tracks spanning R&B, Funk, and heart-piercing Soul numbers, In The Moment is a mix of the past and present, featuring solid classics and contemporary chart-toppers. CC performed all lead and background vocals on the entire album and was also instrumental in the music’s production.

Following the release of In The Moment, Cornell was able to collaborate with other producers (DJ Spen, Boogie Back) and put out several highly acclaimed remixes which have received great reviews in the US and Europe. On May 19, 2017, Cornell released Vindicated Soul, a remarkable collection of soulful covers of artists including Marvin Gaye, Al Green, and Willie Hutch. Vindicated Soul also includes a remix of the classic CC original track “Where Do We Go.” (www.youtube.com/watch?v=4NNT7rrkE-k)

In August 2018 CC released the album ONE LOVE. The first Single from the album, “That Feelin’,” was #1 on all significant Soul Charts in the UK. CC achieved what has been called the elusive “Hat Trick” (#1 on All 3 Soul Charts at the same time) which no other artist has ever accomplished! ONE LOVE has a variety of outstanding Producers on its roster such as Morgan Howell (Soulpersona, UK), Brian Braziel, David Council, and Kirk Crumpler. Cornell says, “ONE LOVE is a message of Oneness with the planet and each other and allowing Love and Music to be our guide to a better world!”

CC has had many once in a lifetime musical experiences to draw from, but two of the highest points of his career so far has been sharing the stage as an opening act for the late great Godfather of Soul, James Brown, and the legendary Ray Charles. In addition to his various headline performances, he has also opened for other household name brand artists such as The Whispers, The Temptations, Natalie Cole, and Kool and The Gang. As part of Narada Michael Walden’s all-star band, which performs at various NMW Foundation events, he has shared the stage with other renowned world-class artists such as Neil Schon (Journey), Dionne Warwick, Ronnie Spector, and many other legendary performers!

Throughout the years, CC has appeared on many albums, and he continues to be one of the most in-demand session vocalists in the San Francisco Bay Area. He was honored to perform with world-renowned, multi-platinum guitarist Carlos Santana, providing vocals on two tracks that appeared on Santana IV and on Santana’s latest album with the legendary Ron Isley. His experience and professionalism have made him an A-list vocalist for Tarpan Studios, appearing on many tracks with Grammy and Emmy Award winning producer Narada Michael Walden, and also contributed vocals on various Tarpan artist releases.

CC loves to share his talents with aspiring artists and veteran performers alike. He established CDC Productions, his own production and record company geared toward assisting these artists to follow their dreams while also teaching them about the time and dedication it takes to reach their goals. Cornell has been involved with many charities and non-profits over the past few years, and his vision is to continue to uplift and engage people all around the world with Music. 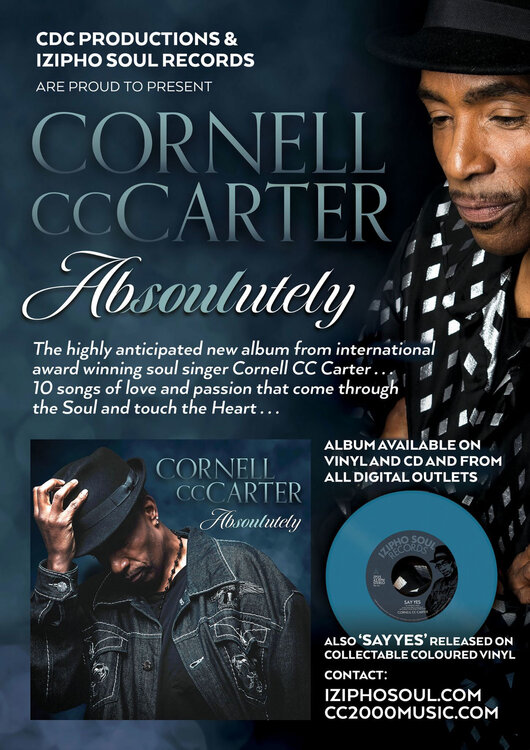