One of the summer's biggest records on the scene, Big Lee Dowell is back bigger and better with a twelve inch release. 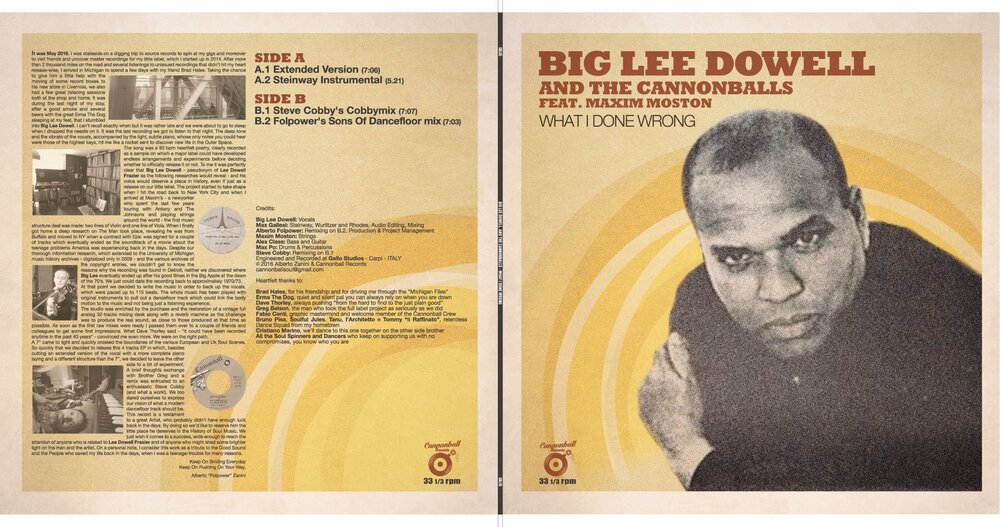 In May of 2016 Alberto Zanini…otherwise better known as Alberto “Folpower” Zanini, was digging in the States for records not just for personal use but maybe unearth something he could release on he relatively new label, “Cannonball Records”.  I have to say the label has in my opinion one of the best looking labels around, anyway I digress!  Towards the end of his trip he was in Michigan and stopping with Brad Hales.  The idea was to help Brad move stock into his new premises and to listen to some unissued masters and acetates.

After several hours listening and several beers and just before retiring to bed the needle was dropped on one final acetate. Alberto describes it as being “90bpm of heartfelt poetry”.  The disc was clearly recorded as a demo, very sparse with just the light subtle piano backing of which you could only hear the higher notes but the “deep tone and the vibrato of the vocals” as Alberto puts it were out of this world.

The acetate was credited to Big Lee Dowell who after some research was actually Lee Dowell Frazier.  Buffalo born Dowell was signed to Epic records and brought to New York to record two tracks, both produced by G. Denby, “Don’t Make Me Mad” and “Black Belt”, both of which went in the soundtrack of what has been probably the first movie about gangs and social youth problems. We are speaking of 1966 and Teenage Gang Debs took to the big screen for the first time the problems of the youth living in the tenements of Brooklyn and in all America’s big cities and depicts the lives and loves of a young generation trying to survive the brutality of gang life.

What happened next to Big Lee as he was professionally known is a mystery and he totally disappeared until this New York labeled acetate was discovered in Detroit.

Alberto loved the track so much he decided to release it on his own Cannonball label, it would be the labels fourth release.  Alberto only had basically the vocals so a whole new musical structure was laid down.  Alberto took the track to Maxin Moston, a regular on the stages of Broadway and it was he who laid down the strings, two different lines of Violin and a line of Viola.  The other instruments we all laid down by the Cannonball Collective, Max Gallesi (Steinway, Wurlitzer and Rhodes), Alex Class on Bass and Guitar and Max Po on Drums and Percussion.

Alberto even bought a late 70s full analogue mixing desk in an attempt to create the authenticity of the time, an authenticity the Cannonbvall crew have essentially nailed because nothing I have heard would have been out of place in the 70s, amazing work and dedication to the cause.

Needless to say the 45 upon release became one of the anthems of the summer on the Northern and Rare Soul Scene, “Feel-good music at its finest” it was described by one of Alberto’s closest friends..  The press, limited to 500 sold out extremely quickly and demand saw the price rise into three figures as demand from Djs and collectors rose. The 45 has seen extensive play on radio shows and at venues all around Europe. 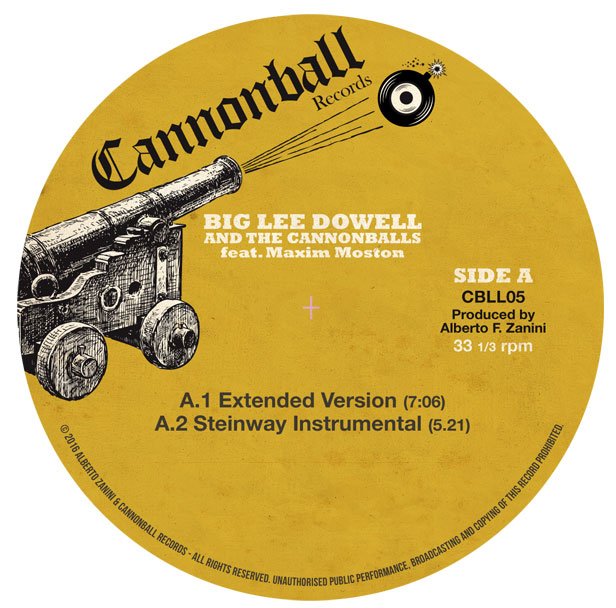 To satisfy the demand created by the track Alberto decided to release a twelve inch take.

The initial take was extended to just over seven minutes, a new piano backing was added and double congas.  Just like the 45, the vocal is then followed by the Steinway instrumental.  The beat for the instrumental was dropped from 115bpm to 110 making it a more leisurely listen, the arrangement of this I really do like. 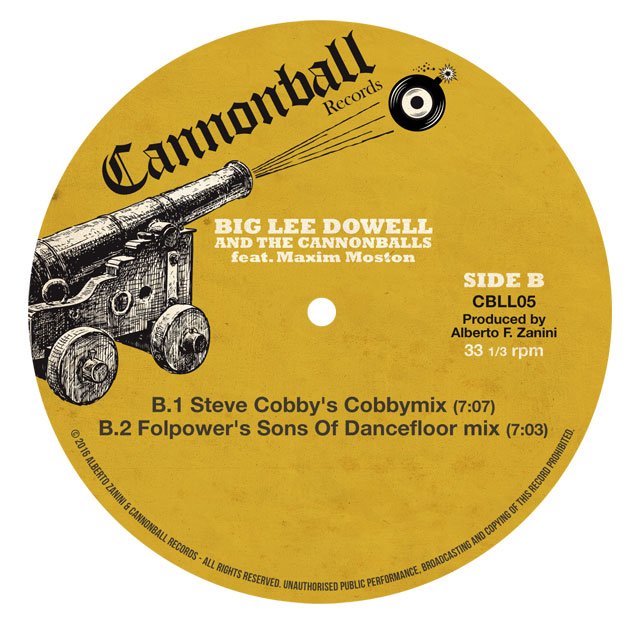 The flip side see’s two remixes, one from Steve Cobby and one from Alberto.  These are aimed more at the dance market rather than the Northern/Rare Soul Scene in an attempt to widen the appeal of the track.  None of the instruments are produced via a computer, all the work is with proper instruments, Fender Rhodes, Wurlitzer and Gibson Les Paul all complimenting the stunning vocals of Big Lee.


September the 26th is the date for the release of the twelve and it is likely to sell very quickly with 200 or so advanced orders so do not delay, get your order in now.  As I mentioned earlier Big Lee was the fourth release and all four have sold out, pretty impressive for a small independent label.

Price is £20 + PP depending on number of copies and destination.

Listen to a mix of all the tracks!

Side A track 1 Extended Version:

Side A track 2 Steinway Instrumental:

Side B track 2 Sons of Dancefloor mix: