Hayley Records (UK) is proud to announce the release of two more spectacular slices of previously unreleased treasure from two of Detroit's finest talents. On 4th July 2016 both records will be officially released. Both are Limited Issues and will not be re printed when sold out.

This unreleased version of songwriter Sharon McMahan's classic midtempo floater sees the light for the first time, since it was recorded at United Sound Systems back in 1967, under the supervision of Ollie McLaughlin. Compared to the sparsely arranged Johnnie Mae Matthews record, this version features a beautiful Mike Terry arrangement replete with full involvement by key members of the Funk Brothers ensemble and the Detroit Symphony Orchestra. The flip 'Life ain't worth living (without you)' also comes from the pen of Sharon McMahan and finds the same backing crew doin' the business on a somewhat more up tempo offering.

A slightly faster, acetate version of this recording, attributed to Melvin Davis, has been circulating around the rare soul scene for several years. This is the correctly paced, accurately identified, master version by the great JJ Barnes in true living stereo! From Bob Babbitt's distinctive opening bass line riff and George McGregor's crackling drum track, to JJ's vocal mastery, the record charges along at a frantic pace, climaxing with  staccato horn lines and a careering beat that must have made the United Sound studio walls shudder! Something this good could have only come from a prestigious talent – and this is indeed the case. Written by Tony Hestor and 'Popcorn' Wylie, it was arranged and produced by 'Popcorn' too, some time in late 1966 or early 1967. Rumour has it that 'Popcorn' shopped it around but couldn't get a deal so shelved it and forgot about it. Hayley hasn't! The B side is a completely different vintage and style, although the setting, United Sound, was the same. Written and produced by Fred Bridges and Richard Knight, for Revilot productions, in 1969, this recording sees JJ duetting with Steve Mancha again. The same session produced their version of Bobby Williams' 'Baby I need your love' (HR 018). Both tracks were rejected as potential releases however ...until now.

Hayley Records has many more fantastic previously unreleased tracks, from the depths of the Detroit vaults, to come, including another Jimmy Delphs peach, Bobby Shepherd, Andrea Henry, Joyce Vincent, Sam Ward, Pat Lewis, Steve Mancha and many others.

Contact sales@hayleyrecords.co.uk for ordering details. Records will not be available from shops or dealers.


Check out all Hayley Records records and compact discs, and keep up to date with future releases, on our website at 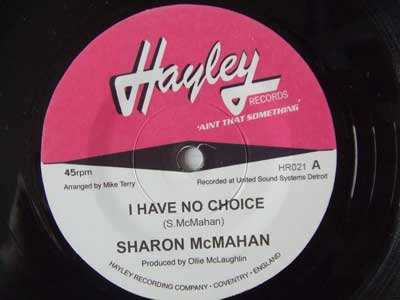 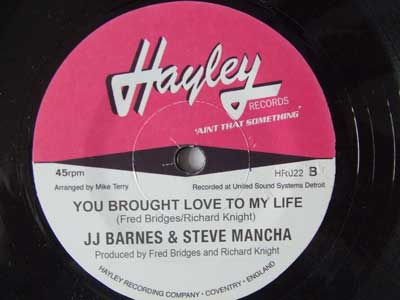