Elbowed Out - Everybody Get Up

Soul junction's forthcoming release of the output of Elbowed Out

Elbowed Out have already been featured by Soul Junction with two 45’s , two dancers “Taking A Step” b/w “Girl You Got Magic” in 2013 followed by a dancer backed with a mid tempo ballad “Things Are Changing b/w Just To Be With You” the following year.  Both were extremely well received by collectors and DJ’s alike.  A further track “In The Book Of Guinness” was featured on the Soul Junction compilation “We Got A Sweet Thing Going On”.

This left four further unissued tracks by the group, three from the same session as the aforementioned tracks, all recorded in 1971/72 and one sole release from circa 1988.  Dancers “All Men Don’t Love The Same” (worthy of a 45 release in my opinion), “Everybody Get Up” and the more sedate “Believe It” conclude the sessions from the early 70’s.   The final unreleased track is the solitary release from the late 80’s ,“Girl I Want You” .

Now for the first time all the tracks laid down by Elbowed Out have been brought together for Soul Junction’s latest release “Everybody Get Up”.  An added bonus are the previously unreleased full length takes of “Taking a Step” &  “Girl You got Magic”.  Once again when you hear the tracks on offer it is hard to fathom why the tracks were left unreleased but at least we now get the chance to hear them all together for the very first time. 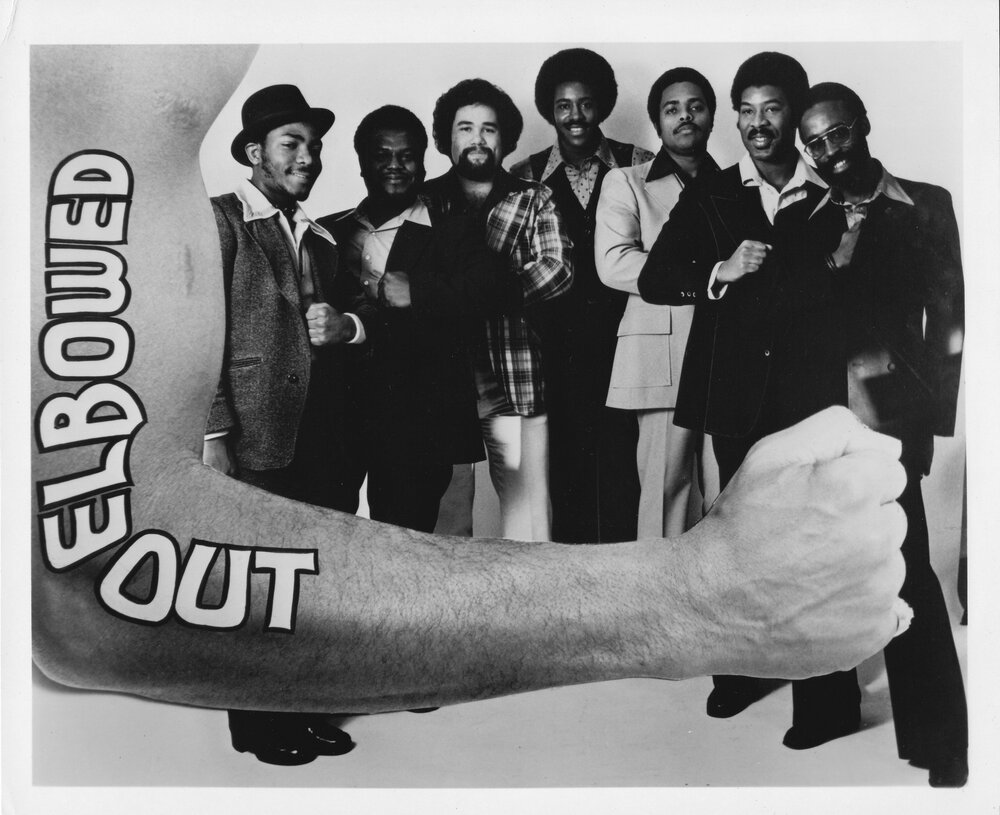 Elbowed-Out were a mixed race group of musicians out of the west coast city of Seattle in the state of Washington. Initially, a college group that was formed sometime during 1971/72 while studying at the city’s University of Washington.

Machouwi after only six months quit the group to be replaced by the more experienced bassist Manuel Stanton, who was briefly joined by guitarist L.A. Jackson during 1975. Machouwi’s lasting legacy to the group would be their slightly left field performing name which  came about after one of the group’s earliest rehearsals, when Nick Caesar , Denis Wilcox and Machouwi were rushing to get into their car during a heavy rain shower. During the ensuing light hearted jostling as all three of them tried to enter the car at the same time, Machouwi was heard to say “Oh man, I done messed around and got elbowed-out!” as he stood there with his bare elbow protruding through a rip in the sleeve of his jacket. When they later relayed this story to the other group members ,following a initial fit of laughter the idea of the group name of  ‘Elbowed-Out ‘ was born.

Elbowed-Out became regular performers at local junior and high school gigs. Their repertoire included cover versions of songs made famous by the Blackbyrds, the Crusaders and Herbie Hancock amongst many others. They eventually graduated on to the Seattle club scene, where they featured as the support act for the likes of James Brown, The O’Jays and Tower Of Power. At this time the group had not yet considered writing any of their own material but this was later to change when they met a young Detroiter by the name of Bill Miller. Bill who had honed his production and writing skills as part of the production team on Wild Cherry’s “Play That Funky Music” at CBS Records and at Motown records working alongside Jeffrey Bowen with The Temptations and The Commodores (including Lionel Ritchie). Bill’s liaison with Elbowed-Out began during 1978 but was to last for no more than a year during which time he was to write and produce several songs for and with other Elbowed-Out members. Although recorded and performed as part of the groups repertoire this material was to remain unreleased (for the moment anyway).

Elbowed –Out continued to perform concerts in and around Seattle attempting to secure bookings in the more prominent white clubs but they were only allowed to perform in them during special Sunday afternoon shows, as the club owners wouldn’t hire them for a week as they didn’t want to attract the black audience. So with this in mind Elbowed-Out purchased the necessary equipment and hit the road securing a gig in Juneau, Alaska. This Alaskan adventure was to be short lived when a subsequent fire in the club destroyed all of their newly purchased equipment.  The following police investigation raised suspicions about the possibility of arson to collect insurance and a possible murder attempt all of which left the group broke and having to somehow find their way home! But help was soon at hand when the local Juneau fans of Elbowed-Out, after finding out about the group’s plight hastily organized a charity event where Elbowed-Out performed with all the proceeds from the ticket sales being given to the group to help them get home.

Undeterred, the group put enough equipment together and headed off to Canada. Their first gig was in Vancouver B.C. followed by further bookings  across the country. It was at this point that after five years in the band that drummer Clarence Acox quit to be replaced by Freddie Hall.

While touring Canada a connection was made which led to the band being invited to perform in Japan at the famous Mugen club in Tokyo. Prior to this Far East adventure Bobby Mabalay who after converting to the Islamic faith changing his name to Shafiq, joined the group as their sound man, a talented guy who occasionally played percussion while mixing at the same time!

After the Mugen gig which ran from December of 1981 to the end of March 1982, Sam Chambliss quit the band deciding to return to Seattle to teach music following the birth of his son. A further change in group personel saw Freddie Hall leaving the group to be replaced by a new drummer Daryl Taplin. Further gigs followed in the Pacific islands of Singapore, Indonesia and Japan before returning home to Seattle.

During 1988 original group members Denis Wilcox, Nick Ceasar and Jabril Rashid along with Vincent Bembry, Doug Lewis, Butch Harrison and Billy Bradford made the recently discovered and final known Elbowed-Out recording “Girl I Want You” recorded at Denis Wilcox’s home studio. A further drummer J.J. Sutton then joined Elbowed-Out remaining with them until their final gig in the Japanese city of Nagoya in 1991. Following the final gig the guys returned home to Seattle and finally disbanded. Although circa twelve months later Denis Wilcox did return to Nagoya where he married Jazz vocalist Emi Higashikawa with whom he still performs as a duo to this day.

During 2012 we at Soul Junction Records were fortunate to discover two excellent unissued Oliver Cheatham tracks “Don’t Pop The Question/Good Guys Don’t Make Good Lovers” (SJ518) and it was during the brokering of a subsequent licensing deal that we were introduced to the songs producer  Bill Miller (who just happened to be Oliver’s cousin). During a later conversation Bill mentioned that he had some other unissued material on a group he worked with out of Seattle would we be interested?  If it was anything near as good as the Cheatham tracks then you bet we would!  Well it was, and following the previous release of two well received Elbowed-Out 45 singles. Firstly “Taking A Step” b/w “Girl You Got Magic” SJ523 (of which the previously unissued full length versions are included in this compilation) in 2013 and followed by “Things Are Changing b/w Just To Be With You” SJ527 in 2014. You now have the entire unissued works of Elbowed-Out from 1978 to 1988 for your delectation.

Elbowed-Out’s mission in life was “to get you up and out of your seat, and then to begin to move your feet” something I think you’ll agreed they most certainly have achieved. 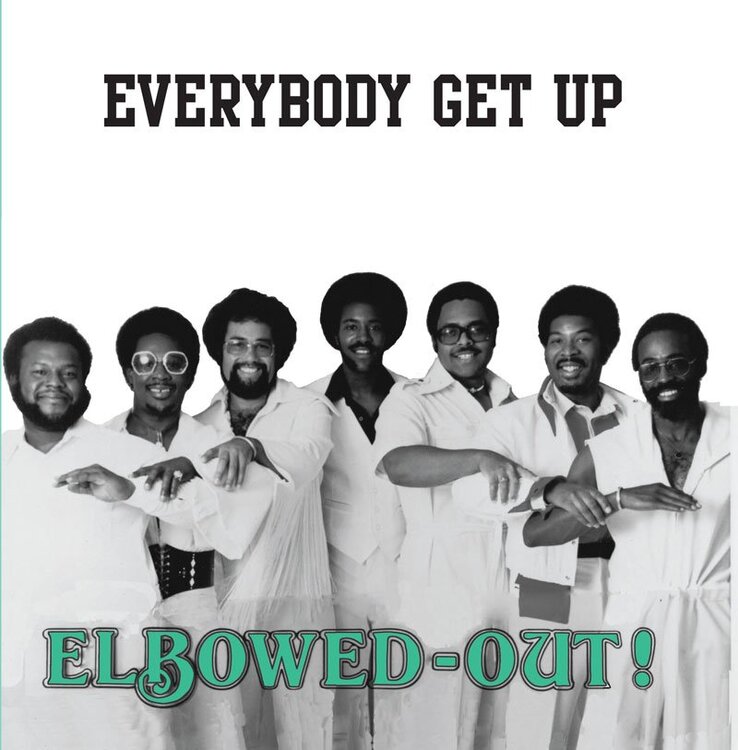 During 2012 we at Soul Junction Records were fortunate to discover two excellent unissued Oliver Cheatham tracks “Don’t Pop The Question/Good Guys Don’t Make Good Lovers” (SJ518) and it was during the brokering of a subsequent licensing deal that we were introduced to the songs producer Mr. Bill Miller (who just happened to be Oliver’s cousin). During a later conversation Bill mentioned that he had some other unissued material on a group by the name of Elbowed-Out that he worked with while living in Seattle, Washington and would we be interested in hearing it ?  Well, if it was anything near as good as the Cheatham tracks then you bet we would!  Well it was and two well received 45 singles from Elbowed-Out would eventually be released, firstly the double sided dance 45 “Taking A Step” b/w “Girl You Got Magic” (SJ523) in 2013. Followed by a further dance track backed with a mid tempo ballad “Things Are Changing b/w Just To Be With You” SJ527 in 2014. 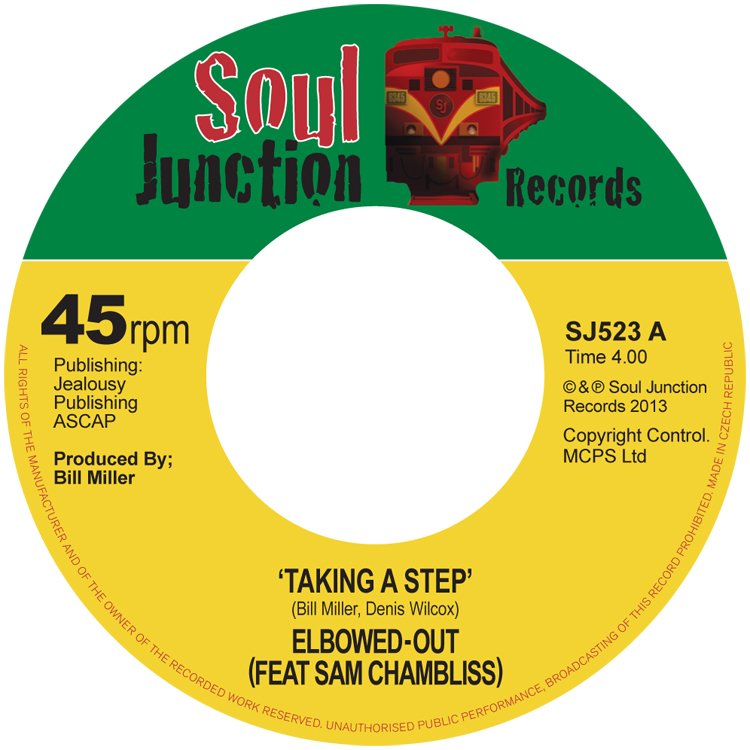 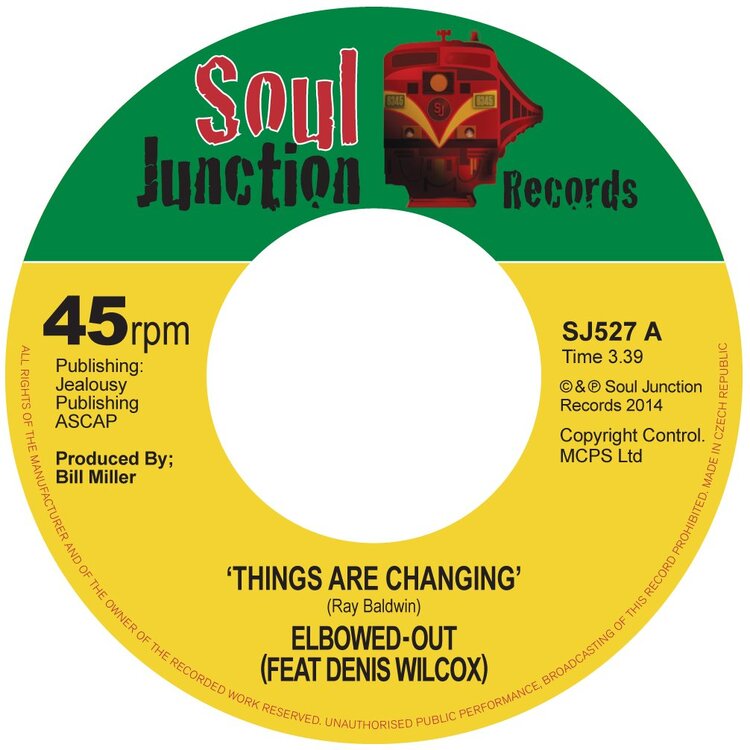 A fifth Elbowed-Out track the sweet sounding “In The book Of Guinness” (probably the only song ever to reference the world famous record breakers annual in its lyric’s) also gained a release on the Soul Junction various artists compilation “We Got A Sweet Thing Going On” (SJCD5009) during 2014.

So twelve months on we at last bring you the entire Elbowed-Out recordings from the group’s 1978/79 sessions with Bill Miller. Which include the aforementioned issued tracks, but on this occasion both “Taking A Step” and “Girl You Got Magic” appear for the very first time as their previously unissued full-length versions (with both being over five minutes in duration).

Together with the remaining unissued tracks “All Men Don’t Love The Same”, “Believe It” and the album’s title track “Everybody Get Up” added to those is the recently discovered track “Girl I Want You” a solitary release recorded sometime during 1988 by Denis Wilcox with one of the groups later line ups.

Elbowed-Out’s mission in life was “to get you up and out of your seat, and then to begin to move your feet” something I think you’ll agree they most certainly have achieved.  So without further ado, just indulge yourself in the sound that is ‘Elbowed-out’.

or to buy go to http://www.souljunctionrecords.co.uk/SJCD5010.html or the usual stockists. 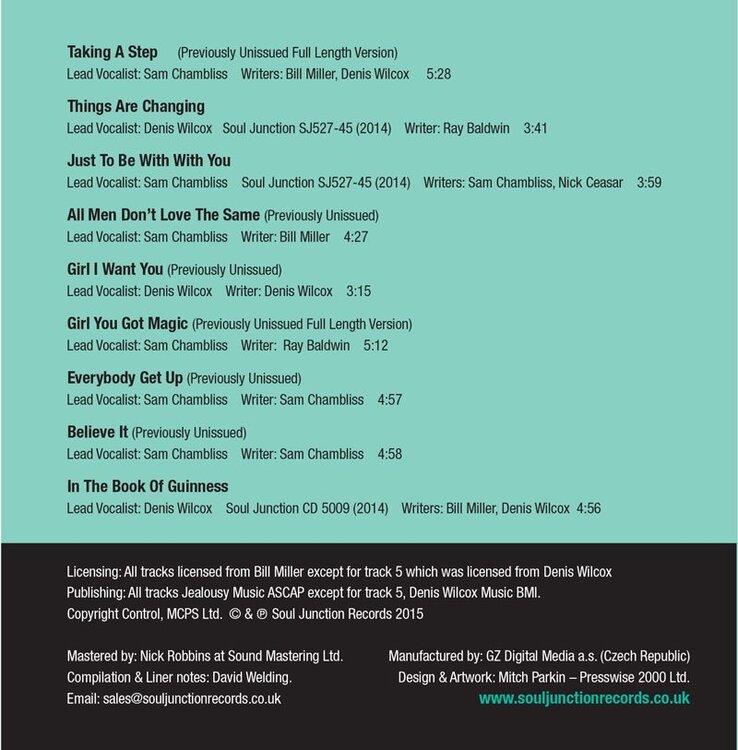