John Harris And The Soul Sayers Now Out On 45

Looks like Bear Records of Germany have just pushed out a legal re-issue of 500 copies of this much wanted 45. Comes complete with a look a like pic cover and says sourced from the original tapes

This 45 does have quite an odd background, as it is one of those of obscure releases that has originated from US forces stationed overseas.

Here's the blurb from Bear Records

British Northern Soul DJ Paul Sadot was probably the first to spin Hangin’ In by John Harris & The Soul Sayers. Over a period of several years, the track became a verified hit in that small underground soul community that has since extended all over Europe. At first, there only appeared to be a few copies, all found in America. This is not surprising since John Harris was a black GI. But he was stationed in the Rhineland and played in a GI band, and the song was recorded in Germany. The group toured a little through the Chitlin' Circuit of Europe's U.S. bases, from Germany to Belgium to northern France.

One day, the band showed up at Kerston Records, a label founded by Alfred Kersten. There you could record and take the recordings home pressed as singles. Former sound engineer Kersten remembers an edition of 250 copies. When the Soul Sayers disbanded, the band members probably took the remaining copies back to America. So far, only two copies have ever been found in Germany.

Collectors who have scared up a copy of the original single will have had to dig deep into their pockets. Recently a copy was sold at auction on Ebay for $ 2,900. But now Cree Records / Bear Family Records has unearthed the original tapes. Limited edition of 500 copies, complete with a picture sleeve.

They can be read via the tag feature... 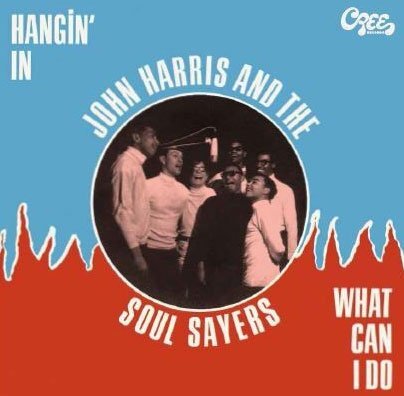