over 192 pages with unique photos

Keith Rylatt’s Hitsville! The Birth of Tamla Motown is the debut title from our new publishing arm. This fascinating story of the Tamla Motown Appreciation Society’s pivotal role in establishing the Motown Sound in Britain is lavishly illustrated over 192 pages with unique photos and rare memorabilia. A carrier bag of photos and mementoes from the early 60s was the starting point for this in-depth history of the birth of Tamla Motown. Hidden away for nearly fifty years, they belonged to Clive Stone, who with fellow R&B fan Dave Godin, set out to bring the Sound of Motown to the attention of Britain’s teenagers. Encouraged by Motown’s Berry Gordy, Dave ran the influential Tamla Motown Appreciation Society from his suburban Kent bedroom, organising informal meet-and-greets with the stars for members, and keeping them up-to-date on Motown news. Keith Rylatt chronicles the story from Stevie Wonder’s fleeting visit in 1963 through to the Four Tops’ sell-out show at London’s Saville Theatre three years later – credited as being the point when the Motown Sound finally entered Britain’s pop mainstream. Beautifully presented in full colour, the book includes previously unpublished photographs taken by Clive Stone and other TMAS members, rare memorabilia and many pages from the society’s highly collectable magazine Hitsville USA.

May have read the pre-advance news earlier this year  https://www.soul-source.co.uk/articles/news-soul/hitsville-the-birth-of-tamla-motown-r3403/ Well the book was launched this weekend and is now available for purchase via quality music book sellers

For more information visit the news section at  http://www.house-of-soul.co.uk/ 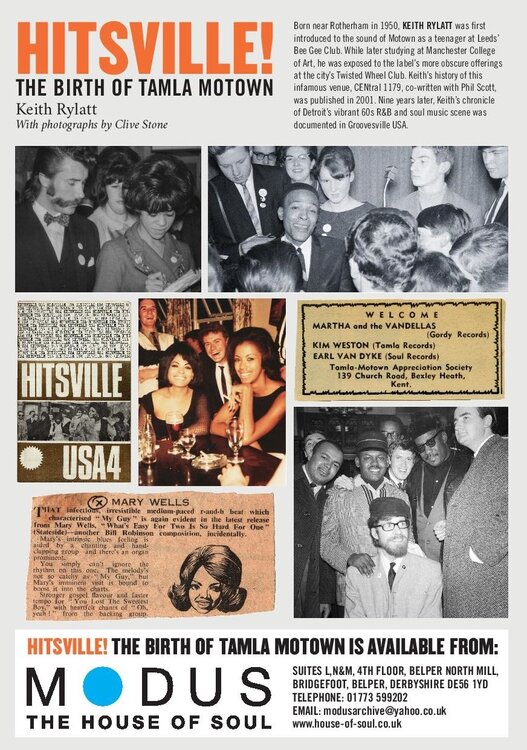