Mavis! opens theatrically in Canada and is also available on iTunes from November 13th

After a standing ovation at the World Premiere screening at the 2015 SXSW Film Festival and at Hot Docs 2015 where it had its Canadian Premiere, Toronto based distributor Films We Like announces that director Jessica Edwards’ MAVIS! will open in theatres in Canada starting Friday, November 13 at the Bloor Hot Docs Cinema.

“A spirited and captivating doc that richly deserves the exclamation point in its title. Jessica Edwards has created a cinematic portrait quite capable of converting the uninitiated into acolytes, and elevating casual interest to flood-tide levels of respect and affection.” –Variety

MAVIS! is the first documentary on gospel/soul music legend and civil rights icon Mavis Staples and her family group, The Staple Singers. From the freedom songs of the ’60s and hits like “I’ll Take You There" in the ’70s, to funked-up collaborations with Prince and her recent albums with Wilco’s Jeff Tweedy, Mavis has stayed true to her roots, kept her family close, and inspired millions along the way.

Featuring powerful live performances,  and conversations with friends and contemporaries including Bob Dylan, Prince, Bonnie Raitt, Levon Helm, Jeff Tweedy, Chuck D, and more, MAVIS! reveals the struggles, successes, and intimate stories of her journey. At 75, she's making the most vital music of her career, winning Grammy awards, and reaching a new generation of fans. Her message of love and equality is needed now more than ever. 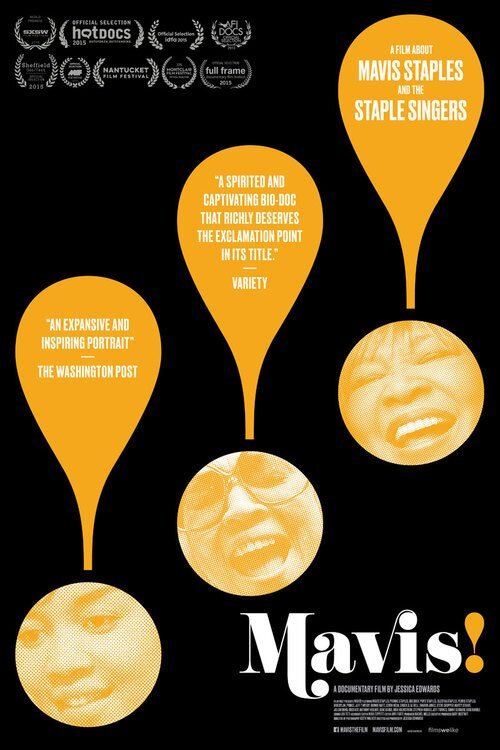 The first time I saw Mavis Staples, it had been raining all day in New York City. She was scheduled to perform that evening at an outdoor concert in Brooklyn, and I wondered if the show would be cancelled. But the rain cleared just before show time, and I sat on a soggy picnic blanket with friends and watched as this amazing woman and her band came on stage. Her voice reverberated through the trees as she sang, testified, preached, moaned, wailed and gave everything she had. The entire audience, young and old, was brought to its feet, and we all left the concert inspired and energized.

When I got home that night, I wanted to know everything I could about Mavis and her family, the Staple Singers. My search for a documentary about her life proved unsuccessful, and I couldn’t believe that no one had documented the lasting impact of the Staple Singers’ music. So I set out to make that film myself. I delved deep into Mavis’s story, which spans seven decades and as many musical genres. I was blown away by the incredible voice that was belting out gospel hits at age 13. I was moved by her freedom songs of the ’60s, and by her stories of touring the segregated south with Martin Luther King. I was enamored with her amazing style and groove in the soul-filled ’70s. I discovered that she and Prince had spent years recording together, and that she’d had a youthful romance with Bob Dylan. What a history!

But as I started shooting the film and we began putting it together, I kept coming back to that night in the park, and how Mavis’s story isn’t about the past, it’s happening now. The fact that she is 75 years old and is still a vital and important artist, and not just out there performing as an oldies act, informed the way we made the film. I didn’t want the film to feel ‘historical’ even though we cover so much of Mavis’s history, and with it, the history of American music. So I felt it was important to include as much contemporary footage as possible, both of Mavis and the locations of her stories.

The biggest challenge was how to capture a career that spans over 60 years in one film, which is an impossible task. Inevitably some of Mavis’s story needed to be left for viewers to discover on their own. But what was important to me was to try to celebrate the importance of her legacy and share some of the inspiration, passion and love that she’s instilled in me through her music and her life.

more info and details via