What is the definition of a rare 45 ?

John Laughter and Third Generation - In Our time - MDJW 002

What is the definition of a rare 45, keep in mind that often the press runs that were done ranged from a handful of private press 45s for promotion, through to the 1000’s for major labels.

The Fourth levels only release, Deep South, has remained elusive for the last 25 years. Shifty is sited as the first to get and spin a copy from a record digger in Detroit, followed by Mick H then Dave Thorley. A few collectors in the US were known to have copies, but overall, no one really knows how many copies as people tend not to broadcast when they sell a 45 on. It is so elusive that many have not heard the track and know virtually nothing about it.

Jordan Wilson managed to track down Larkin Yewell to speak to him at some length about the release. Having started a conversation – that was not based on asking if he had any 45s – something Larkin has been plagued with since 2010. Jordan wanted to understand more about the band, who they were and how they came to make such a great recording and why it never got the recognition it deserved. Through several conversations and trawling the internet for any information we could, we started to build a picture of the story around the release and where copies might be. A random post from 2016 said that Larkin had no records but was still in possession of the master tapes. A quick message to Larkin and he confirms that he still has them somewhere.  Following on from this, when Jordan posted that we had agreed a deal and where in the process of getting it mastered and pressed, a guy in the US posted he had a copy, and it was covered in writing.

I could see Larkins’s name written on the label so we set about finding out. It turns out it was the copy Larkin gave to his sister when they went back to the south to play gigs. When she sadly passed away the copy found its way to a thrift store as the family could not keep all her belongings.

Once Larkin confirmed he still had the tapes, we agreed on a contract to ship the tapes to a studio in LA for restorative work to preserve the tape and for them to be digitised. Once we had that part safely done, we looked to working up the designs and getting the track mastered to make sure it would sound good with modern pressing techniques while not losing that raw edge that it always had.

If you have never heard this track have a listen to it here and also listen to Larkin talking about it with Jordan.

MD Records are properly pleased to have tracked this down to bring to audiences new and old. This track never had the success it should have done back in the day and Larkin explains why in his interview.

This 45 will be available from Mid March 2021 and alongside of this we are also issuing another properly tough to find track out of Florida.

John Laughter and the Third generation recorded and released “It’s our time” in Dave Plummer’s Cypress studio. This track is a Sax driven monster RnB dancer that previously remained covered up and elusive. Johnny Beggs first found it and started playing it as 3rd Generation and then Des picked up on it and found a copy. Des reached out to the studio but we didn’t really get anywhere at that point. A couple of years later and another conversation brought it back to mind so off we went again scouring the internet for clues on John Laughter to see if we could get to the track that way. Sure enough John was on line and more than happy to talk. He is still playing Sax and gigging whenever he can – although the pandemic put paid to that for the last 12 months or so.

So here we are with our 2 new releases on our new fully licenced re-issue label which is fronted by Jordan Wilson. The aim of the label is to bring the tough and hard to find tracks to vinyl to give them a new day in the sun and to get money back to the artists and rights owners.

Just circling back to my original point, when is a rare record, rare, well originally both of these releases had 1000 copies pressed back in the day.

Deep South probably has less than a dozen known copies at this moment in time – we added to the tally with the one that appeared in the US that belonged to Larkins sister and is still owned by a US collector, we also managed to source another 3 copies that now reside with us in the UK and following the story through further back to Detroit, discovered another copy, possibly 2 in an archive.  On John Laughter and the Third Generation we know of 3 copies currently, so neither one is as an easy find!

You never know, more might surface of both titles as people start to play the tracks and talk about them, but they might not! Let us wait and see.

The MD black top series are limited to 500 copies on stock pressing and the first 2 releases come with a picture sleeve containing notes on the tracks. There are also 20 test presses of which only 15 are sold via our website. The remaining 5 sit on file with us. 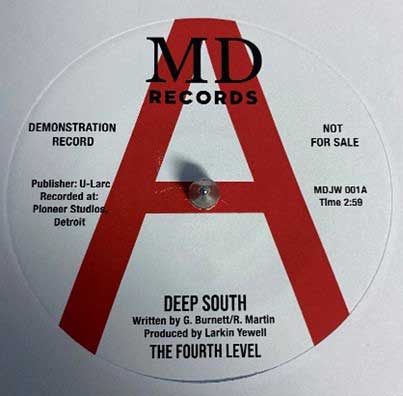 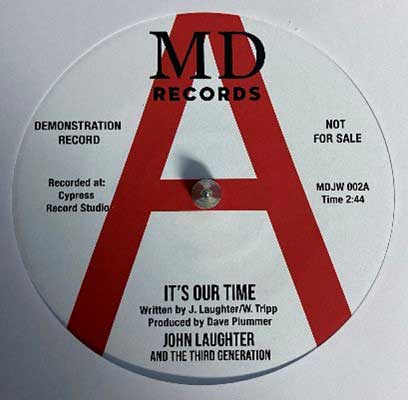 Sound files for both tracks are on our website mdrecords.co.uk 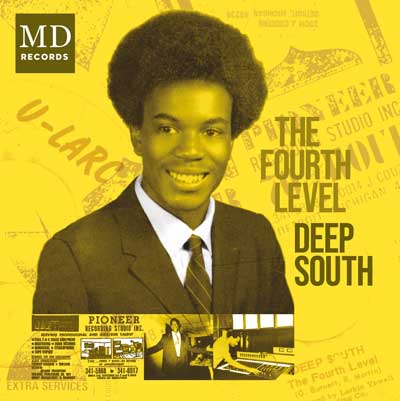 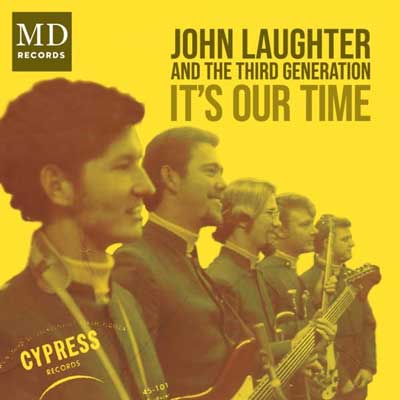