THE ONE YOU'VE ALL BEEN WAITING FOR!

Can You Dig It?

It is with great pleasure that we announce the latest Diggin’ Deep 45. A new release and two beautiful sides, to lift your spirits and feed your soul!
Both these tracks are from the vast repertoire of Warren Schatz in New York City. The maestro who brought us The Brothers ‘Are You Ready For This’, The Voice Box ‘I Want It Back Your Love’, The Third Time Around ‘Soon Everything’s Gonna Be Alright’, The American Youth Choir ‘Keep Your Fine Self Near Me’, Evelyn Champagne King ‘Shame’ and many more!

Joe Johnson was born May 18th 1950 in Dixie Georgia, just about as far south as a person can get before hitting the Gulf of Mexico. As a young child he attended Georgia Baptist Church, where he watched his mother and grandmother singing. He knew in his earliest years that he wanted to sing more than anything else.

Aged seven his family moved to New York where he was exposed to popular music for the first time, a very different style of music to what he had been used to.

Away from the south, Joe lost interest in singing until in December 1959 when he visited Georgia to see family for Christmas. Finally, he felt back home, listening to good southern music once again, in the environment he had grown up in. It would be 1963 before he returned to New York, aged just thirteen years old. And he knew what he wanted to do for the rest of his life…. sing southern soul music.

In the early 70s, a friend who heard him sing said that he should try to get a recording deal and suggested he should go to Associated Recording on Broadway where many artists went to record demos. It was there that he met Warren Schatz, who at the time was a young engineer working at the studio. Warren had a track of a song he had just finished called “Keep Your Fine Self Near Me”, which he asked the young Joe Johnson to sing. Schatz and his writing partner Stephen Schlaks had just finished a demo of a song of Steve’s called “Together We Can Make It”, which the publisher, George Pincus of Gil Music had placed with Polydor for release under the name of the American Youth Choir. They decided to use Joe’s recording of “Keep Your Fine Self Near Me” as the “B” side. The record gained a 45 release in the UK, as well as the USA and fans of Northern Soul will remember it getting occasional spins in the mid 70’s.

Around that time Warren Schatz was publishing songs by The Main Ingredient (formerly the Insiders) who were with RCA and one of their writers, Robert Maxwell had written two new songs: “Trust In Me” and “I’ve Done No Wrong”. Warren and Robert had previously worked together and a couple of years earlier had recorded a demo of “Baby, Don’t You Know That I Love You” backed with “I Want It Back (Your Love)” by the Voice Box for Loma Records. Warren finished recording the background tracks for the two new sides and decided to try Joe on those as well as ‘Keep Your Fine Self Near Me’. The result was two further fabulous soul sides combining the sublime blend of a big city arrangement, instrumentation and production with the rich southern timbre and raw emotion of Joe Johnson.

Warren knew he had something, but having nowhere to place the tracks at the time, decided to private press just a handful of discs to get around to DJ’s, aiming to create some interest in Joe. He said “I think I just enjoyed seeing my name on a record. But nothing happened. I got busy. They never got to the DJ’s and the project ended”

Right after that Schatz and Johnson somehow lost contact and their gem of a record was shelved and put away. Until now.
Diggin’ Deep are proud to bring you the first official label release of this absolutely wonderful Warren Schatz hidden gem; Joe Johnson ‘I’ve Done No wrong’ c/w ‘Trust In Me’.

Please take a few minutes to listen to the promotional video.

Both sides are now available on a beautifully mastered 45.
DD011 collector’s release is a limited pressing @ just £12 each plus postage and packing.

Diggin’ Deep Records – Sheffield, England. Making available a series of excellent Soul recordings from the 60’s and 70’s, most of which will be released as a limited edition 45 for the very first time, and the occasional, carefully selected, re-issue. Many more titles are already lined up for limited future release. Keep informed by collecting the vinyl, joining the mailing list, visiting the website and social media pages regularly and ensure you’re among the first to know! 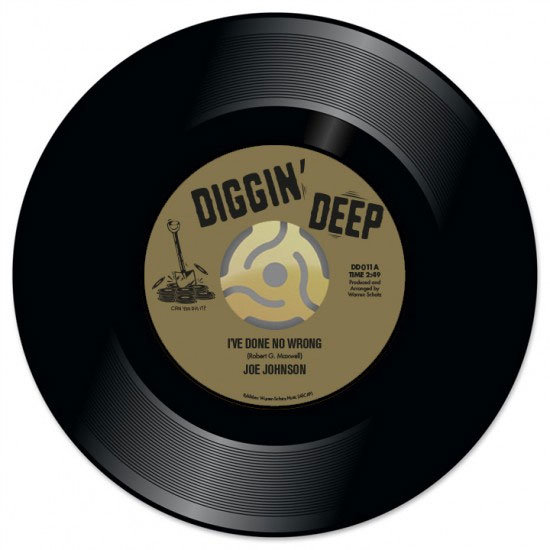