MD records is the brainchild of Mark Anderson and myself, Des Parker to put out limited issues of previously unissued Soul gems. We really want the releases to speak for themselves, no gimmicks or nonsense - All priced at £10 each (Postage £2.50 first class recorded), all available through ourselves on this site ( I'm SOUL INC @SOUL INC  in case you didn't know)

Anyhow the first release is

Ronnie Walker - Can You Love A Poor Boy/Now I Cry

The topside was recorded in 1973, when Ronnie was approached by WDAS DJ Harvey Holiday who had the idea to get Ronnie to record a version of "Can You Love A Poor Boy" which never saw a release. The flip "Now I Cry" was recorded on 17th October 1967 at the same session where "You're The One" and "Thanks To You", but was not released ………………………...until now!!

Thanks to Ronnie Walker and Dave Louis of Funkadelphia records for the help, anyhow let Ronnie introduce the tracks 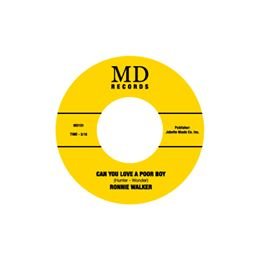 PayPal can be done via lotusexcel@icloud.com.

If using PayPal it’s friends and family at cost or goods and services with charges picked up by buyer- it’s around 5% uplift from experience.

Can get a price for other amounts/ countries. I can be contacted on here via pm to  @hold tight
Or emails to enquiryMDrecords@outlook.com﻿