The latest release from Soul Junction Records sees a UK release for the Nu-Rons with All My Life b/w Disco Hustle. 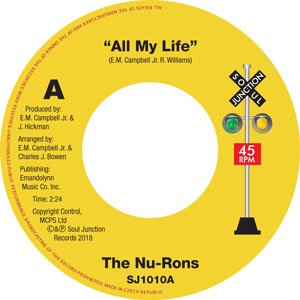 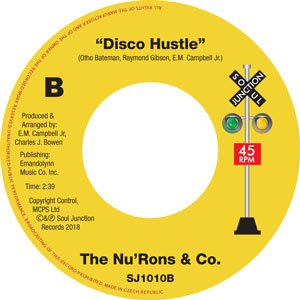 During the late 70’s and onwards leading Wigan Casino DJ Richard Searling had begun to move away from the more traditional four beats to the bar sound 60’s and was programming more soulful seventies, new and recent releases into his DJ set’s. One of the many records he championed was the b-side to a very obscure local Philly  45 release by the then unknown all male group, The Nu-Rons. Richard had obtained this elusive 45 from record dealer John Anderson on one of his many buying trips to John’s famous Soul Bowl emporium in Kings Lynn.  At the time Richard Searling was not only famous for the constant stream of new 45 discoveries he was continually playing but also for the ingenious cover-up names he bestowed upon them. In this particular case The Nu-Rons began their life within the UK northern soul scene under the cover-up name of ‘Lamar Thomas & The Chains That Bind’ under the title of “All Of My Life (Spent Waiting For You)”. Such was the volume of new finds in that period that even the most popular records were subsequently dropped in favour of the next discovery. Following The Nu-Rons 45’s fall from grace on the wheels of steel, avid soul collectors would continue their search for this elusive 45. That was until following the birth of the genre later described as the ‘Crossover’ sound. The Nu-Rons soulful harmonies fitted the bill perfectly and with more copies now being in the hands of more DJ’s and collectors alike The Nu-Rons “All My Life” would in all probability reach the full height of it’s popularity and demand. 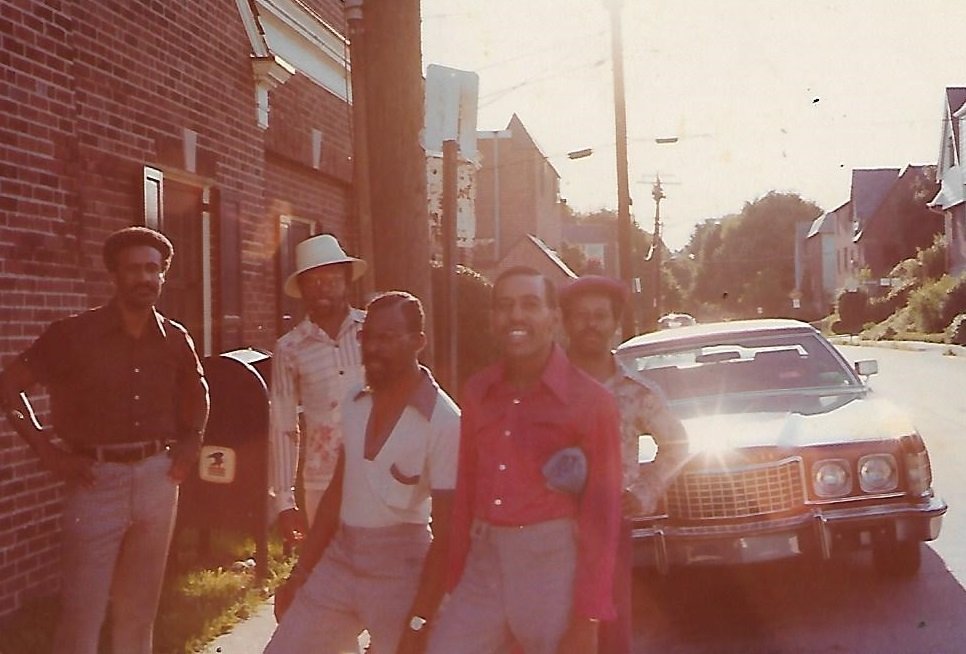 The Nu-Rons, were a family group consisting of two sets of brothers and cousins, the four young men in question being brothers Daryl Howard and Raymond Gibson (Daryl’s mother registered him under his father’s surname of Howard and Raymond under her maiden name of Gibson) together with Otho Bateman and Charles Bateman. They were all born and raised in Salem, New Jersey and from the age of ten and eleven began singing with a fifth member and Gibson brother Rudolph as a group called The Gospel 5.  They eventually decided to crossover to secular music and as a group known for their energetic dance routines they came up with the new performing name of ‘The Nu-Rons’ (taken from the word ‘Neuron’ which is a cell that transmits nerve impulses). However Rudolph was soon to leave the group due to physical illness.  Also Daryl Howard and Charles Bateman had also been part of a working group known as The Devotions prior to becoming The Nu-Ron’s. 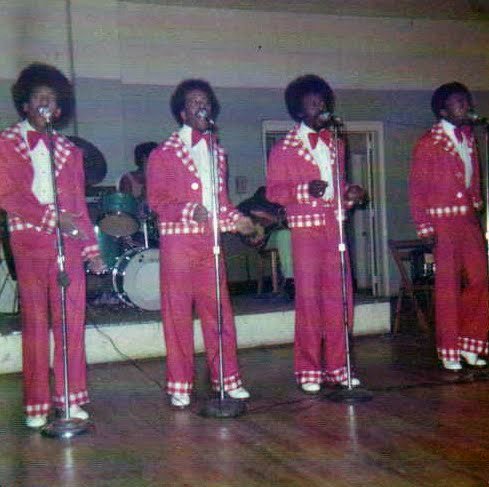 Following hours of practice The Nu-Rons eventually felt confident enough to put their own shows together and began to perform at local dances and parties around New Jersey and Philadelphia, often being used as a non-paid warm up act for bigger named artists. They moved between several different managers including Jimmy Bishop (Duo Dynamic Productions) until they came under the tutelage of WDAS radio DJ Georgie Woods (his wife Gilda, being the owner of the Philadelphia Gil, Dion and Top & Bottom  record Labels). It was Georgie who introduced them to Manny Campbell who in turn invited them to an audition at his and partner Charles Bowen’s Emandolynn studio in Chester P.A. The song The Nu-Rons chose to audition with was the self penned “I’m A Loner”, the audition went well, as during late January/early February of 1970 Manny and Charles took The Nu-Ron’s into the Sigma Sound Studio’s with Tom Bell and the TSOP musicians to record “I’m A Loner” and “All My Life” which was released on the Nu-Ron label (H1060) in April of the same year. 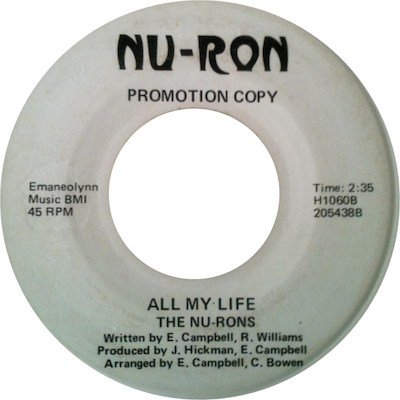 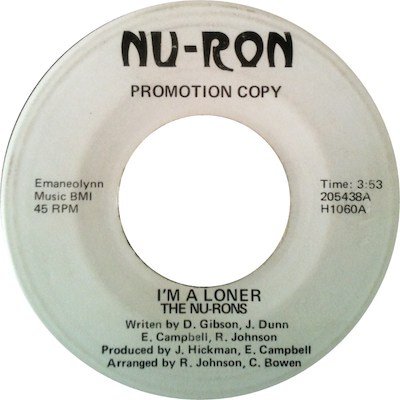 During 1975 the Nu-Ron’s entered the Sound Room studio in Upper Darby P. A. to record two more Campbell and Bowen songs, “Disco Hustle” and “Can’t Do Enough Girl”. “Disco Hustle” (Stage-Art 1001) was a new song prevalent to the shift towards the disco boom in Philly. While the b-side “Can’t Do Enough Girl” was a sweet soul ballad previously recorded during a demo session in 1971. 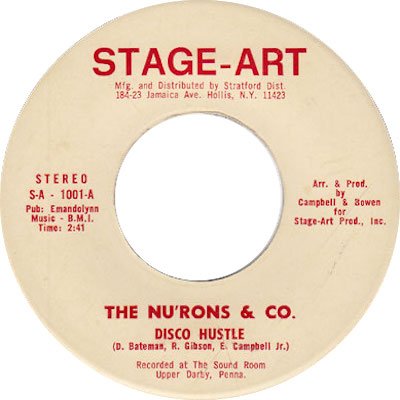 The Nu-Ron’s “All My Life” faired reasonably well locally in Philly although it would be through the record later finding its way to England and into the hands of first Northern Soul and later Crossover DJ’s that the 45 would achieve its greatest notoriety. While in recent years with the shift to a more funk orientated sound, their song Disco Hustle recorded under the artist name of ‘The Nu-Rons & Co has too grown in demand. Here before you now is the Nu-Ron’s two most in demand sides back to back for your delectation. The Nu-Ron’s are still working and recording today although as a group of three, with Raymond Gibson having sadly passed away. 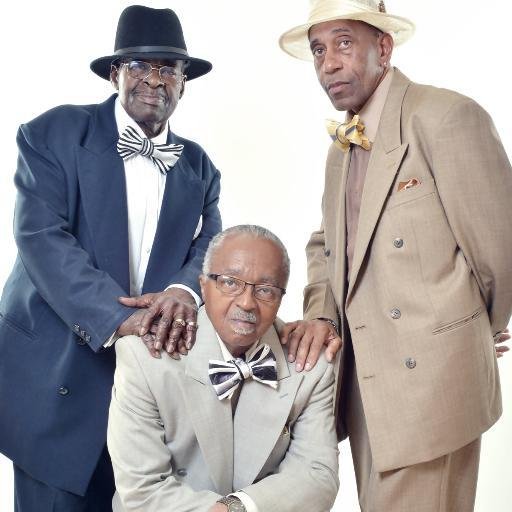 Ironically during Manny Campbell’s later relocation to Atlanta, GA during the late 70’s he took the decision to take the remaining 2000 unsold back stock copies of “All My Life” in his possession to the dump !