Out Now! Realside - When I See Your Smile - Epsilon Records Co EPS004 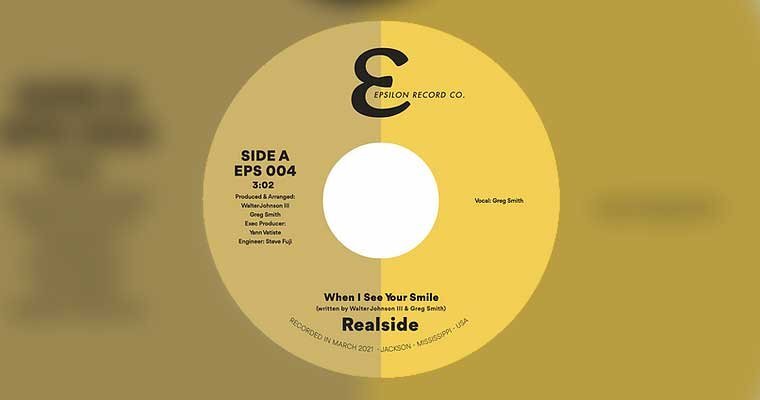 A: WHEN I SEE YOUR SMILE

B: WHEN I SEE YOUR SMILE (EXTENDED VERSION)

“When I See Your Smile” is a truly beautiful and elegant soulful song, which was recently recorded in Jackson Mississippi in March 2021 for Epsilon Record Co.

Born in 1942 in Jackson Mississippi, Walter Johnson began his musical career as a singer in a doo wop group in 1958.

A true veteran in the music business.

He met bassist Greg Smith in 1974 in class at Jackson State University in Jackson MS.

They started connecting  and discovered that their mothers knew each other. At this time, Walter was the leader of a group called Rock-Bottom.

He asked Greg to play in the group.

They both moved to Kansas City in the early 1980s for work.

They formed a new group and called it Realside,

They just wanted to be real when writing their songs, music that touches you deep in your heart.

Walter was the lead singer at the time.

They wrote "Hang Loose" and “Flyin High” as well as "I got a Jones for you" on their own label called Walterhouse Records, all of which are extremely collectable these days.

Their records were well received locally and unknown  to them, “Flyin High” & “Hang Loose” were bootlegged in 1984 on SBR (Song Bird Records) records. They only recently found out via the internet.

Walter got in trouble in the mid-80s and that was the end of Realdside.

Greg and Walter separated for almost 35 years but never forgot that they always loved music.

After living in Dallas, Texas for a few years, Walter returned home to Jackson Mississippi.

He found out that Greg was still living there and talked to him about getting him into another group.

They teamed up with a singer by the name of Tommy Johnson who they now work with almost every weekend.

Walter is now almost 80 years old and Greg 10 years younger. They decided to make music until they die.

They hope people will love “When I See Your Smile” and have many more songs to share with soul music lovers.