Press Release: Anthony Fontaine   How Can I Lose (What I Never Had)/Stop That Old Grapevine   SJ1015 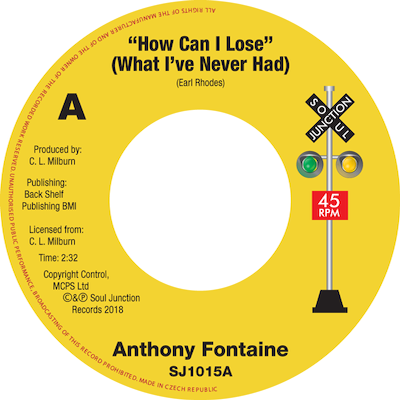 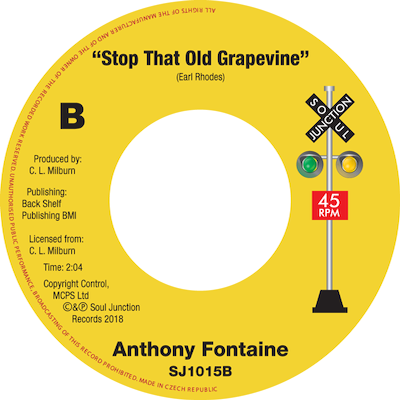 Anthony Fontaine was originally from Memphis Tennessee.  During 1969 he signed up with Pasadena Texas record producer Claude Latimore Milburn, under whose auspices he recorded two fine songs. Firstly “Stop That Old Grapevine” which starts with a female monologue before a horn section kicks into a fine uptempo southern dancer, and “How Can I Lose (What I Never Had)” which is a more melodic soulful mid tempo outing, both songs were released as a 45 on C.L. Milburn’s ‘Souled Out’ record Label (Souled Out 36203. Both songs were written by Earl Rhodes which is actually Anthony Fontaine’s real name. Another act of note which features on the Souled Out label is the El Paso group Bobby (Rosales) & The Premiers. Who recorded two collectable 45’s, “Mess Up My Mind/What About One More Time” (Souled Out 36201) and “Man About Town/Gotta Have A Reason” (Souled Out 36202). Their song “What About One More Time” is a popular favourite with the Low Rider scene to this day. 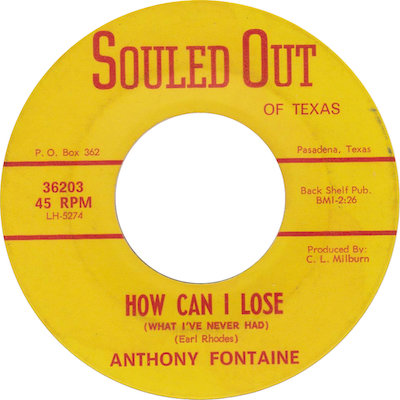 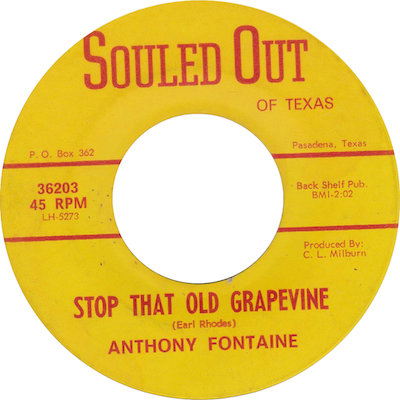 Anthony later joined Willie Hill in a singing duo performing under their christian names of Willie & Anthony. As ‘Willie & Anthony’ the duo recorded two 45’s on the Albany, Georgia based Molly-Jo label (Albany being Willie Hill’s home town.) Firstly “One Hand (Wash The Other)/Selfish Lover”  (Molly-Jo 1001) followed by “I Can’t Leave You Alone/Selfish Lover” (Molly-Jo 1005) which was picked up in 1973 by Miami main man Henry Stone and released on his Blue Candle label. Stone released a further two 45’s on Willie & Anthony “Groovin/I’m Tired (Of A One Way Love Affair)(Blue Candle 1503) in 1974 and “Sugar, Sugar, Sugar/It’s Never Too Late (Blue Candle 1509, also UK Jayboy 94) in 1975. This was to be the duo’s last recording for almost a decade with their final release appearing on Jesse Boone’s Soul-Po-tion label “I Feel It Coming” with Willie (minus Anthony) being joined by Barry Richardson on the releases flipside “”You Can Depend” in 1984. 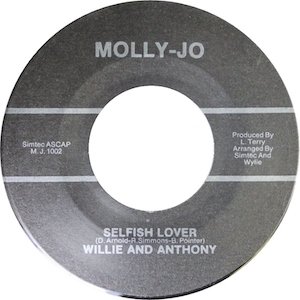 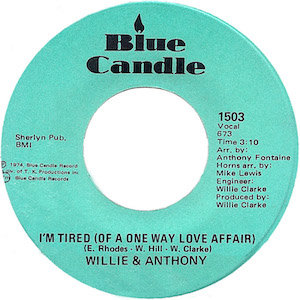 After Willie & Anthony parted company, Willie later went on to record for the Ichiban and Ifgam labels.  As for Anthony Fontaine his career might have taken a different path through his association with his former producer C. L. Milburn Anthony almost joined the mighty Stax label’s recording artist roster. During the early to mid 1970’s C.L through his friendship with Al Bell worked for a time at the Stax studio’s and tried to secure Anthony a recording deal, sadly a vote of 5-4 against by the label’s board meant that this was not to be, although Anthony was involved with some songwriting work with Little Milton.

According to C.L, Anthony Fontaine sadly passed away during 2012, so his remaining legacy is the clutch of recordings he made with Willie Hill and his now in demand solitary solo Texas rarity, which Soul Junction has now made more readily available as a limited 45 release.

As a foot note C. L. Milburn was the cousin of Shirley Ann Milburn, Shirley Ann being the first wife of the late renowned English Disc Jockey John Peel, whom John had met while working in Dallas as a insurance Salesman and later a DJ before he returned to the UK to work on the offshore pirate radio station, Radio London.

With acknowledgements to: Claude Latimore Milburn.