Chairmen of The Board - Words Left Unsaid. New CD release and UK Tour

The Chairmen of The Board (Featuring Ken Knox) have a new CD and download release on MoPhilly Records.  2018 will also see the group back in the Uk for several dates around the country.

More details can be found at the group website  https://www.thechairmenoftheboard.com/tour 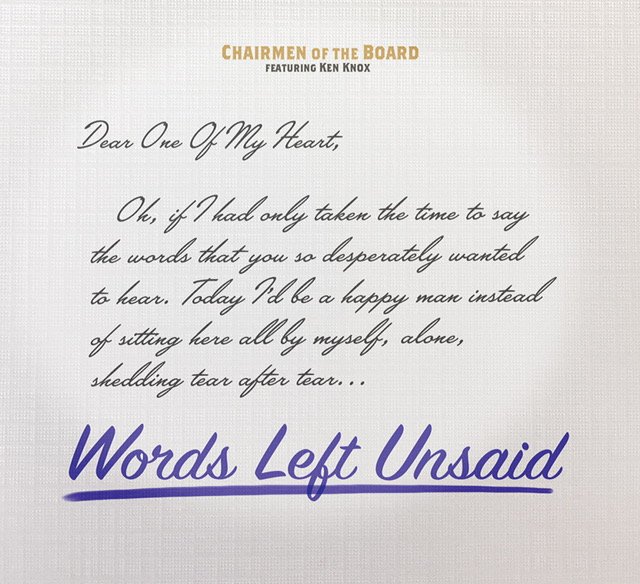 The Chairmen Of The Board (Featuring Ken Knox): “Words Left Unsaid” Liner Notes.

When one of America’s most evergreen soul groups, The Chairmen Of The Board, collaborates with one of Philadelphia’s most prolific song writing teams, The Steals Brothers, who in turn are aided and abetted by one of Detroit’s most respected producers and arrangers McKinley Jackson, then you just know that the end product is going to be something that’s an extra bit special.

Back in 1967, The Chairmen Of The Board became the flagship act of the newly formed Holland/Dozier/Holland inspired Invictus/Hotwax labels. As the 1970’s dawned, they scored a string hits with “Give Me Just A Little More Time,” You Got Me Dangling On A String,” etc which brought the group international acclaim while their 1972 outing “Elmo James” (although a US-non hit) also becoming a chart hit with their European fans. In later years the group became a headline act within the Carolina Beach Music Scene, with their 2002 Surfside records outing, “Bless Your Heart,” becoming a highly collectable classic. Sadly original group leader General Norman Johnson passed away in 2010, and at his request fellow Board member Ken Knox continues to lead the group to this day, being ably assisted by new group members Thomas Hunter and Brandon Stevens and a "Hot" six-piece backing band, The Executives.

In 2017 Ken Knox’s Chairmen Of The Board called upon The Steals Brothers/McKinley Jackson’s Mac-Mer-Mel Production Co. to record the upbeat song, “All I Need Is You Tonight,” released as a down-load-only as the lead song for this CD album project on their MoPhilly International Records label. “All I Need Is You Tonight” is a song first written for Arthur Prysock (Released on Old Town Records in 1976) by respected Philly wordsmiths Mervin “Mystro” and Melvin “Lyric” Steals whose extensive song writing catalogue also includes the 1972 Atlantic records million seller, “Could It Be I’m Falling In Love,” which they wrote for another hit-making Detroit group, The Spinners. The third main protagonist within MoPhilly International, is McKinley Jackson whose horn playing and arrangements can be previously found on many other former HDH acts' recordings like Laura Lee, Honey Cone and Freda Payne as well as his own group, The Politicians Featuring McKinley Jackson on Trombone. He also produced Lamont Dozier’s “Out Here On My Own” an ABC album. McKinley is currently working as the Musical Director for Motown's Legendary Otis Williams’s Temptations.

The opening track on the album is an up-to-date rework of The Major Harris Boogie Blues Band’s 1974 Atlantic records release, “Each Morning I Wake up,” a great up-tempo, feel good song to open an album with. The other up-tempo songs featured are the Steals Brothers/McKinley Jackson penned “Get Your Lovin’ While I Can,” a song previously recorded by another perennial favourite Beach Music group, The Embers, and later by Philly outfit, Earl Young’s Trammps. Followed by the Ken Knox penned “I’m Ready Willing And Able” previously recorded in 2014 by Ken Knox & Company, Soul Music Lovers should not only get prepared to put their dancing shoes on, but should also be sure to have a box kleenex close at hand.

The two remaining tracks on the album are there to remind us of what The Steals Brothers do at their best and that is to compose beautiful songs of love. Firstly the title track of the album “Words Left Unsaid,” a ballad that just oozes that classic Philly Sweet Soul Sound, a song that they first recorded on former Fat Larry’s Band lead singer, Darryl Grant. Followed by a totally new song, which Melvin “Lyric” Steals wrote in collaboration with Philadelphia's Teddy Prendergrass’s former keyboard player, Alfred aka “Alfie” Pollitt entitled, “No One Else.”

Now with The Chairmen Of The Board (Featuring Ken Knox) firmly ensconced as the flagship act at MoPhilly International (MPI) Records, we can only look forward to the future with great relish! 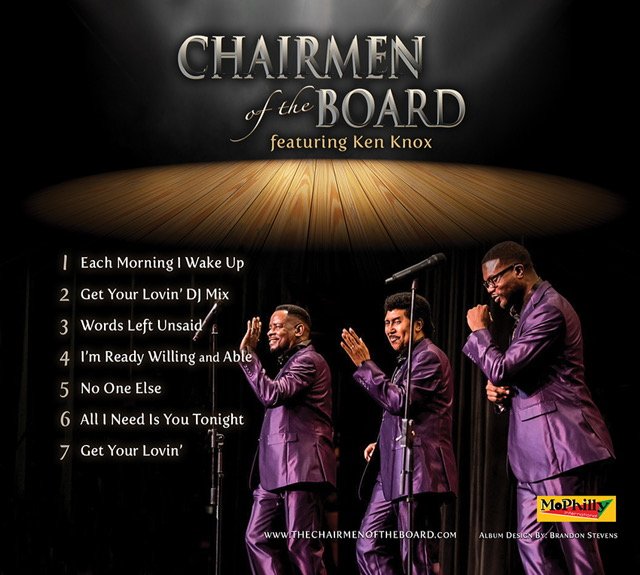 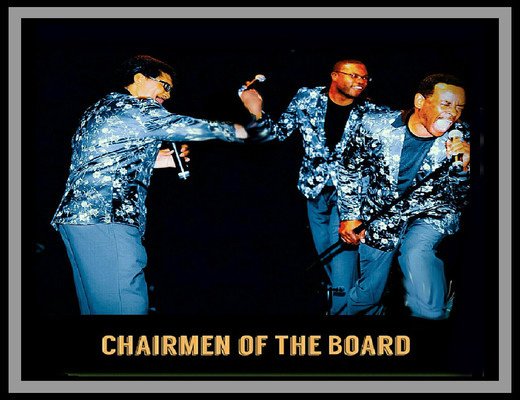