A book telling the story of the beginnings of Cannonball Records

Most of us go through life essentially simply surviving, the dull reality of real life often puts paid to any dreams or aspirations that many of us have, the odd night out and drink at the weekend to break the monotony of real life, of work, bills, debts and the struggle to put food on the table and your kids don’t go without.  Often a cruel twist of fate can lead to an adventure that one doesn’t expect and gives you the kick needed to realise those dreams, no matter how unrealistic they may seem.  That is exactly what happened to Alberto upon receiving the news from Mr Giannetti about his termination of employment in 2014, a result of the recession affecting business worldwide.

For some of us music has been our escape from real life, working and living for the weekend, Soul Music, in particular Northern Soul has been a way of life for many.  A weekend spent dancing, digging through box after box of records with a desire to find rare obscure music neglected and rejected by the country of its origin, namely the USA, Deejaying, partying and more besides, all in the company of likeminded people initially from the four corners of the UK to eventually across Europe and then the world.  Friendships forged have lasted a lifetime.

It was Alberto’s love of Funk and Soul that upon finding himself unemployed began to realise a dream of finding unissued recordings and releasing them to the world through his own record label. 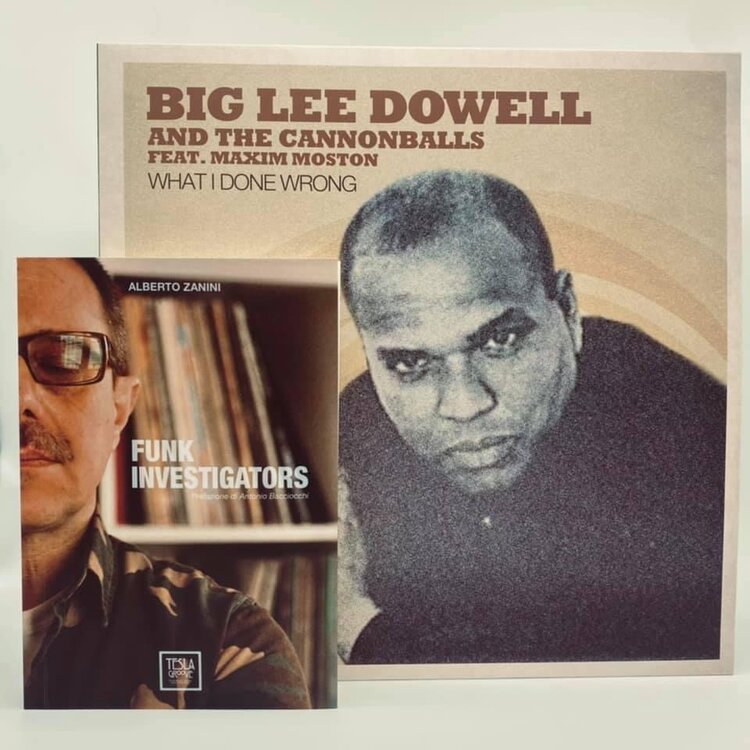 Funk Investigators is the story of how it all came to happen and in particular the story of one singer’s one minute 12 seconds of master tape recording that changed Alberto’s life and belatedly that of its composer.

It all began after Christmas of 2014 and the planning of a trip that would change Alberto’s life.  The itinerary of a nine-day trip was plotted, the many years in business became evident as the planning was professional, thorough and meticulous.  Every detail scrutinised, nothing left to chance.

Flights were booked, cars hired, motel rooms for overnight stops booked.  Contacts were made and meetings arranged with those who could help with his quest to find unissued masters.  Firstly, in a small town in New Jersey to meet Elmore Jackson, former singer, songwriter and studio engineer who recounted his story to Alberto and gave him an insight to the workings of the music industry.

Visiting his friend Bard Hales in Detroit and the finding of the master tape for the song that would propel Alberto’s label to a newfound fame and pave the way for success that has seen over 50 releases to date.

He recounts the avenues taken to find Big Lee Dowel and those who helped along the way, Professor Albert Aubrey (Director Detroit Afro-American History Detroit University), Marsha Williams at the Detroit Public Library and Eddie Delgado at the Bronx Library Centre.  The chance meeting of a group of church goers who knew Big Lee and his family and subsequently finding Big Lee Dowell himself.

Then there is Alberto’s friend Aleksy who helped turn the part recording into a full recording, taking the 1 minute 12 seconds tape track consisting of the intro, one verse one chorus then one more verse.  After some cutting and stitching adding instrumental bridge, they had a 3-minute 8 seconds song.

Everything is told in detail, not so great as to overwhelm the reader though, it is remarkably a very easy read, and the book is hard to put down once picked up.  Alberto’s life on the road in business is evident, the daydreaming, those who spend time on the road will understand this, it helps break up the boring reality of mile after mile of dull tarmac!  Alberto is clearly a people watcher and a very good judge of character.  His observations of life around him, the social history related to give context and an understanding of his surroundings helping to paint a perfect picture of his journey and carrying the reader along with him.  There is also a glimpse in the book not just into Alberto’s early life at school and how a young Mod named Andreas turned Alberto away from mid 80s British pop to American Soul and Funk and but also Alberto’s family life.

Funk Investigators is not just one man’s story, his drive to discover unreleased material upon this remarkable scene we all share a deep passion for, but it is the story of a team and the part they played no matter how small in bringing the music to the world.

There are many reasons why an artist and a recording never made it, even beyond the studio, lying dormant in the vaults for decades.  Whilst we have labels like Cannonball though, these artists and their recordings are at last finding the respect and the audience they deserve.

If you are quick, you might pick up a copy of the book from one of the stockists, but worry not, a reprint is due in the autumn.