George and Faye Treadwell and The Drifters Story 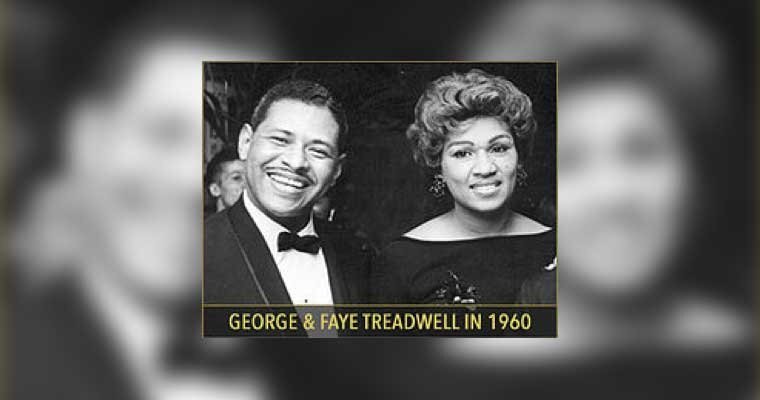 The Drifters Girl  throws a spotlight on the murky world of a  music industry often marked by accusations of betrayal, exploitation and plagiarism through a complex web of accusation and counter accusation. Soul music history is of course rife with such tales, but few matched The Drifters in its scale and length.If you probe a bit further you find  a litany of broken promises and contracts , poached talent and double crossing that many football fans might recognise.The Drifters Girl musical  presents Faye as a feisty heroine  fighting for the groups name , but the Treadwell family made some shrewd and sometimes ruthless decisions to assert control over what in effect was less of a creative collective and more of a lucrative ‘Brand “ or Franchise.  The show includes Faye declaring

“The Drifters are like the New York Yankees , you can change the team but you can’t replace the Yankees.” .

The Treadwell’s are  just three members of a complex web of characters who , over 60 years , fought  for rewards that came with such a popular brand name.

“There Goes My First Love “

In 1953 Atlantic Records co founder Ahmet Ertegun  seized an opportunity to coax Clyde Mc Phatter ,  lead tenor with Billy Ward and the Dominoes -  away with the promise of his own backing group, The Drifters.Ertegun initially recruited, but soon ditched  five members of the gospel Mount Lebanon Singers , in favour of another line up which achieved early success for Atlantic .Mc Phatter  later used his army draft as  the opportunity to pursue a solo career leaving the Drifters. In doing so he sold his share of the groups name to George Treadwell. In doing so Clyde  later admitted that he denied the existing and subsequent members little or no control over the group or their income.

Treadwell was a Jazz  Trumpeter and husband of Sarah Vaughn , Under Treadwells control the group achieved success but was soon marred by financial disputes and departures  including lead tenor  Bill Pinkey , who was later to form his own group     “ Bill Pinkney's Original Drifters” , further disputes also saw former members start ‘The Original Drifters ‘, Within  five years of the groups birth  there had been, at least 5 lines ups involving three  groups and three  managers in dispute over control of the brand. During a performance of at the Harlem Apollo feuds escalated to fights, and in  a ruthless move Treadwell sacked all the group and persuaded  the manager  of The Five Crowns (Lover Patterson) to rebrand them as The Drifters, bringing B E King as lead. Musically this is the equivalent  of Wimbledon FC being relocated to Milton Keynes as a new entity , which rightly earned the wrath of most football fans . Treadwell’s decision also didn’t initially go down well with the Drifters fans who were loyal to Mc Phatter .  This reportedly  saw some frosty audiences before  most succumbed to Ben E  King and chart success . Treadwell’s loyalty to his wife was equally flimsy . During a stay in LA he wooed a member of the Board of Education and daughter of Arkansas Baptist Minister Fayrene Johnson, who turned a blind eye to his  marital status , until they were free to wed.  The musical suggests Faye impressed George with some shrewd and adept suggestions and that he eventually took  her on board to help manage the group. 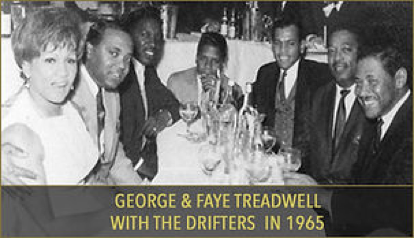 Following Mc Phatters’s departure the Drifters were plagued by further complex changes in their line up.Ben E  King’s period is often cited at their ‘Golden Years ‘ but in truth Johnny Moore was the groups main stay during their most successful period in the late fifties and early sixties . During this time group members were in effect salaried employees of the Treadwells ‘Drifters Inc’ , Members of a group often referred to as ‘The Treadwell Drifters.’  Group members were denied a share of royalties or record shares and any right to use of the groups name. This was a period of relentless touring schedules , which continued into the seventies and eighties . At one point , Moore, the groups mainstay quit due to exhaustion but later returned only to die of pneumonia aged just 64. He was cremated in Croydon in 1998.George Treadwell met an early death in 1967 aged just 47 , and Faye was left with control of the group.

Litigation and a move to the UK

In 1969 magazine editor Larry Marshak planned a series of retro Rock and Roll tribute shows and recruited some former members to perform. (Finding an ex and often emitted  Drifter never proved too difficult , there have been at least sixty in circulation . ) He subsequently began to promote them as The Drifters , which triggered a twenty year litigation battle with Faye Treadwell over rights over the name.Faced with declining sales and chart success in a new age of music  in 1972  Faye moved The Drifters to England  where they secured both extensive live tours and chart success with an extension of their brand of popular RnB/Soul. The UK offered Faye and the ever changing Drifters a wealth of cabaret  and working mens clubs and provincial theatres as well as a number of US Air Force bases, not to mention markets in mainland Europe. In the stage show there is evidence that the move also allowed Faye to delay costly US litigation proceedings, which led to an accusation of ‘abandonment’ of the brand name in the USA . Whilst UK success later  helped fund Faye’s litigation , it brought with it further splits and legal wrangles. So in the same year that The Drifters were inducted into the  US Rock and Roll Hall of Fame , a legal battle was being played out in the UK by rivals operating out of Woking and Cleveleys. You could imagine “There Goes My First Love” playing over this sad event.

Two former members of The Drifters Inc , Tour Manager Mark Lundquist and Agent Phil Lunderman  set up The Drifters UK.It was eventually  resolved in Faye’s favour. (Public records reveal that Lundquist was  allegedly  fighting for performance revenues that averaged £218,000 a year, hardly lavish !)By  2001 Faye   returned to the USA allegedly bankrupt. Control was handed over to her daughter Tina  (who is featured in the Drifters Girl show as a child)  it was to be another seven years before  the litigation with Larry Marshak was resolved in Faye’s favour of the Treadwells.

By which time the number of variations of The Drifters had exceeded to absurd levels . These would include The American Drifters, Don Thomas and the Drifters, The Dock Green Drifters , The UK Drifters , The Drifters Legends, Clyde Mc Phatters Drifters , Bill Pinkeys Original Drifters , The New Drifters. At least a third of these were in the UK . There was a version of The Drifters to suit every purse, cause and venue. They were booked by Princess Anne ,  Tony Blair and Bill Clinton, .They offered  stage appearances for Primary school children, swooped in to  a Birmingham ASDA for Children in Need , or you could win a chance to record your favourite  Drifters song with them via The Daily Express . These were not mere ‘Tribute Acts’ , each  of them might lay claim to a lineage that spread back to Ahmet Ertegun and Clyde Mc Phatter. 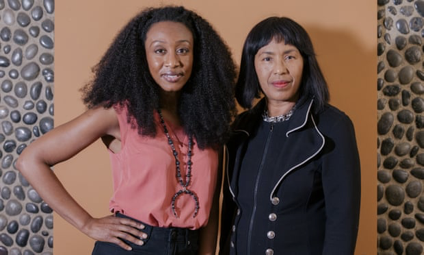 Today Tina Treadwell is president of the Treadwell Entertainment Group  based in Los Angeles, a long way from the world of her parents.  She was a graduate of Princeton University , and went on to a successful career as a Casting Manager for Disney Films .She written a number of   award winning  stage productions , served as a US Foreign Emissary in SE Asia and is planning a film about her parents. The West End Musical staring Beverley Knight was supposedly based on a book by Tina  , but  I have yet to find details of it .The Drifters were certainly not the only group to fracture into multiple line ups, Soul music is littered with similar stories. The Platters , The Temptations. Like the Drifters they hide stories of feuds , alleged betrayal, and often greed. Truth be told many of the audiences probably didn’t even care of the legacy of the group they were seeking. Yet you could argue that Brand over Band serves  in some way to cheapen the music in some way.

The Drifters Girl opens at the Garrick Theatre London next week. 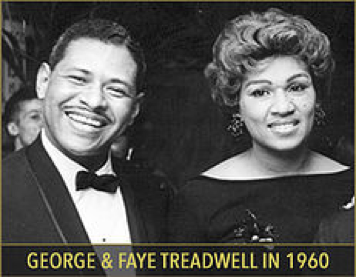 Soul on Screen : An appreciation
Amy Winehouse: A Personal Tribute .