Back in 1966 (the 20th of May to be exact) the latest edition of the Detroit Free Press Newspaper had on offer a lengthy feature on Detroit's Golden World Records, concerning itself with such topcis as the studio, the recording process and artists such as  JJ Barnes and Edwin Starr

Thanks to the ever-expanding online newspaper archives (this one being newspapers.com ) you can read this feature almost as easy as on the day it was first published... 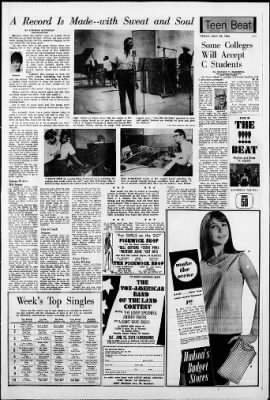 Find it an interesting resource and could be a useful addition to the resources already on offer such as Billboard etc, though finding the time needed to search in depth may be harder than the actual travelling back!

A Record Is Made
with Sweat and Soul BY LORAINE ALTERMAN

Emotion filled the control room at Golden World Records out on West Davison. Driving, big beat sounds were coming through the four speakers hanging on the wall above the big glass panel. On the other side of the glass, Edwin Starr was singing full of soul. Along with the studio musicians was his own group of five, scattered around the big soundproof room trumpet trumpet player, bass, sax, drums and guitar. In the control room, Bob D' Orleans (chief recording engineer) pushed his fist into the air in time with the beat. Al Kent and Richard Morris (co-producers (co-producers (co-producers for the session) jumped around, danced, shook their heads in time.

Suddenly Bob jumped up from the control board. Something was wrong with the drums. The drummer was inside a baffle a padded wood partition to keep the sound in one place so it isn't picked up on other mikes but the drums were not right. "Got a billfold?" Bob asked. "Tape it it to the drum." Edwin and the others started again and this time the drum sound was softer. Now they made it. After two hours of rehearsing like this Edwin Starr was ready to start taping. A record was in the process of being made. But it was 10 hours later and five songs more  before they were finished. And the record still was days away.

You probably think it's a pretty simple thing to make a record. Like an artist just has to walk into the studio, open his mouth in song, and pow! it's down on tape. But, that's not the way it is. A lot of hard work by a lot of people you don't hear too much about goes into getting that sound onto records. And, for the record company company a lot of anguish goes Into wondering whether that record Is going to be a hit because hits are the things that pay the rent. For a company like Detroit's Golden World, 50,000 records sold starts bringing in the profits. This firm is about two years old, but they've only had their own studio for a little over a year. Before that, president and founder of Golden World, Joanne Bratton, used to take her artists to Chicago or New York to record.

In January, 1964 the company company had its first big hit, "Romeo and Juliet" by the Reflections. It made the top 10 nationally and Joanne decided decided it was time to get a studio together.

THE VOICE of Edwin Starr fills the studio at Detroit's Detroit's Golden World as he gets his sounds on tape with J. J. Barnes swinging on piano and Tyrone Hite on drums. Edwin, aiming for songs with universal appeal, says, " 'Stop Her On Sight' appealed to teens and adults. Fellows are looking for girls and girls for fellows."

Edwin Writes His Songs "I dont the opening thing. It doesn't mean anything. It's nothing that would catch my ear," says Bob D'Orleans, left, to Edwin as they stand in the control room next to the tape machine. BOB D'ORLEANS works at the control board adjusting the level of sounds coming through amplifiers from the studio. "I cut no sessions without Bob. He's my hitmaker," says Edwin.