Kill 'Em and Leave: Searching for the Real James Brown by James McBride

When it comes to the listening side of soul music, there are still one or two avenues down which I have yet to wander, however, I enjoy nothing better than reading about the wide spectrum of sounds and more so the artists who created that music, whether it be in those dedicatedly produced fanzines of yesteryear, or the numerous books that find their way onto the marketplace.

Although there have been numerous books written about “The Godfather of Soul”, “The Hardest Working Man in Show Business”, or whatever title you care to bestow on him, I had only ever pencilled ‘a James Brown book’ onto my ‘must read’ list. That changed with the arrival of “Kill 'Em and Leave: Searching for the Real James Brown” by James McBride.

At times it helps knowing little about the subject matter as you can then approach a book with a completely open mind and of James Brown I knew nothing more than the basics, so I began turning the pages ready to learn more about the man with countless nicknames, but only one truly unique sound.

Brown was born in 1933, near Barnwell in South Carolina, going on to win some forty-four gold records and countless awards from the music industry, whilst amassing, and losing, and amassing again, a small fortune, that after his death was to cause countless problems for those left in at the forefront of it all.

As you turn the pages of James McBride’s well written and never boring book, Brown comes across as a man who trusts only a few, something that was far from being a negative approach, as a very high percentage of his fellow entertainers were pure and simply ripped off by all and sundry.

Banks were high on Brown’s ‘no-go’ list, with his hard earned money ending up buried in back gardens, or hidden under hotel carpets, with the singer re-visiting the latter, sometimes a year later in order to retrieve the thousands of dollars that many had been walking across in the intervening period.  All this of course did little to help when he came up against the might of the IRS.

Money was also a huge problem following his death, when everyone wanted their share, from long forgotten family members to greedy lawyers despite his will stating that his estimated $100 million fortune be used to educate poor children in South Carolina. As yet, they are still waiting! 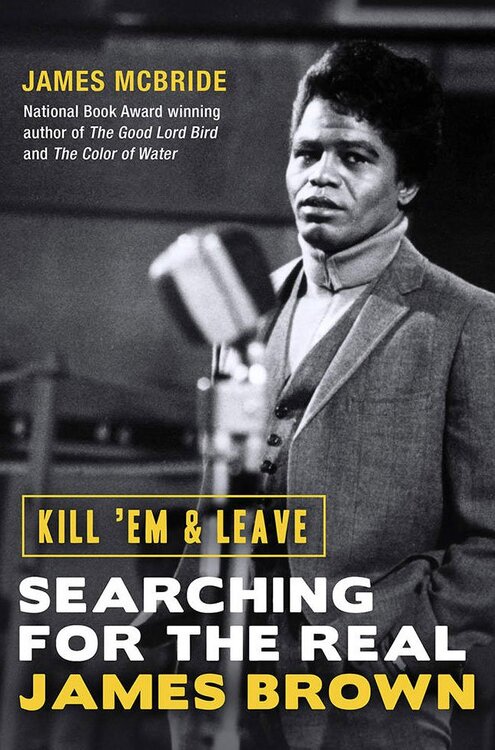 But what of the book in question? Did I find the ‘real James Brown’ at the end of its 256 pages?

Difficult to say really. I certainly learned a bit more about the man himself and McBride, an accomplished musician, and a noted author, takes you through the troubled times of a true music legend, but to be honest, the book tells you more about Brown’s entourage and backing band members, one who ended up living on this side of the Atlantic, than the man himself. These stories in themselves give this book an added edge.

It does create a shadowy picture of a troubled man, but a man who knew what he wanted and where he wanted to go, a man who knew how to work his audience – arrive at the venue, onto the stage, do his set and back on the road – “kill ‘em and leave” was indeed his catch phrase.

Should you want a biography, detailing the life and times of James Brown, then have a look at the other fourteen books on the man, but if you want to get below the surface a little, get the story from those who were there, those who at the end of the line suffered through no fault of their own, then you will enjoy this title. Unlike many autobiographies or biographies, it is neither boring, nor dull and it does give an insight into the complicated nature of Brown’s life. I suppose in a way, it does, in the end reveal the real James Brown.

So, how do I rate it? For its simplicity, the recollections of those who were around the singers as he took the music scene by storm and for it being an enjoyable read, I would give it 4 out of 5. With just a little bit more about the man himself, it would probably have edged a 5

James McBride is the author of the National Book Award winner and New York Times bestseller The Good Lord Bird, as well as the bestselling novels Song Yet Sung and Miracle at St. Anna, and the #1 New York Times bestseller The Color of Water. He is also a saxophonist and composer who teaches music to children in the Red Hook, Brooklyn, housing projects where he was born, and a Distinguished Writer in Residence at the Arthur L. Carter Journalism Institute at NYU.
Bibliographic information

Various Editions available Kindle, Hard cover, Paperback and Audio but appears the paperback ain't out in the UK till 2017

Kill 'Em and Leave: Searching for the Real James Brown