LARRY PAYTON, CHICAGO.
This post is an incomplete file with which I have two choices; leave it to gather dust no doubt never to see the light of day again or to share it as it stands with you guys in the Soul community. I can’t envisage receiving any more relevant information unless this post prompts some memories from out there.

Larry Payton first came to my attention while researching the life and times of Jerry Murray aka Jerry O for my book about him published last year. Due to Larry clearly being pivotal in Jerry’s early career I spent many weeks trying to gain information on him but my efforts were endlessly side-tracked by references to his more famous name sake who was in Brass Construction and also Lawrence Payton of the Four Tops, all three of whom have now sadly passed away. I was able however to piece some limited information together mainly from US record industry publications but it could hardly be described as thorough; sketchy would be more fitting. This is all a great shame as it appeared that Larry was an unsung hero, integral in shaping the early Chicago Soul scene.

As is often the case with a book on any new topic, following the publication of the Jerry O book it triggered responses that would have been so useful had it surfaced earlier; in the case of Jerry Murray his half-sister and cousin came to light stating among other things that he was from Arcola, Mississippi where in 2017, at the town’s annual carnival they celebrated his life and he still has family there. One young relative bearing the surname also from Arcola spoke to his father who was friends with Jerry and he confirmed that Jerry’s fatal car crash was indeed near Arcola around ‘74. As far as Larry Payton is concerned the same thing happened but in his case it was his son, Shawn who contacted me. His situation was similar to one I encountered in a previous book, Groovesville USA where Detroit record man Mike Hanks’ daughter Uarda contacted me as she knew little about her late father and sought information on his life. As you will see in Shawn’s case he was shielded from his father’s work on the city’s music scene by his mother hence the void.

In the early 60s Larry entered the music business running a record store in the South Loop neighbourhood of Chicago, very near Chess Records who were on South Michigan Ave. When the record store closed for the day he would go to a nearby recording studio he used where he pursued his record production work. According to Shawn’s mother, Larry was renowned for being able to identify a record title from a customer’s humming or whistling scraps of a song they were looking for.  His wife helped run the family beauty salon, she did not however approve of the music business in the city, knowing it to be a rough and tough world, especially Larry’s facet, the record distribution side. She always said that Larry was too nice to be mixing with many of the shady characters involved and that it was a good thing that he was a big guy (and presumably able to take care of himself). She therefore understandably totally distanced herself and the young Shawn from Larry’s work life which, from a research point of view is unfortunate as she only has limited memories of those days. For example she vaguely recalls Art Morton’s Soulville Record Store on the West Side in which Larry was involved where important stuff happened regarding Tom & Jerrio, Jerry O, Maurice Jackson and that rogue Motown track etc. but sadly she can’t remember the name of Larry’s own store. There were hundreds of record stores in Chicago in the 60s and I have yet to find anyone who recalls either of the stores in question. One memory she does have however is of a close girlfriend who dated Jerry Murray. 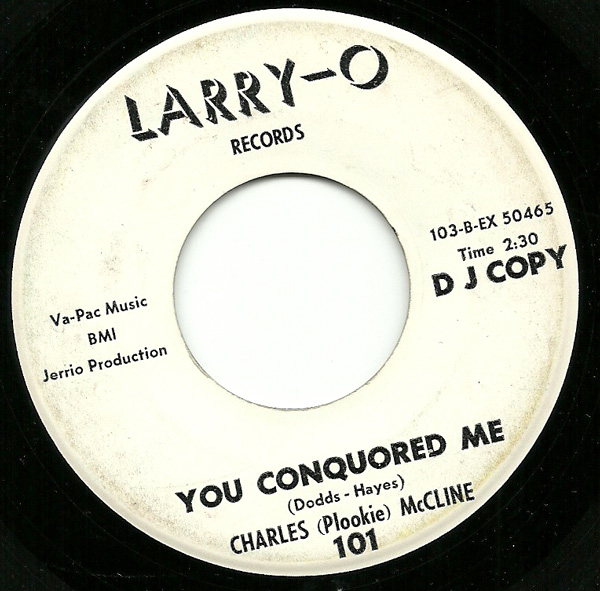 Apart from distributing, promoting and producing records Larry launched his own Larry O label in February 1964 with `You Conquored Me` (sic) by Charles `Plookie` McCline and to confirm Larry’s connections with Murray the identical recording was released simultaneously on a look alike label, Jerry O but billed as Willie Logan & the Plaids. Larry also presided over Payton Publishing which features regularly on many of Murray’s early sides and recordings by others associated with him. Larry clearly assisted Murray’s career in various ways in those early days.  The only other known Larry O release came in ’68 which is detailed further on. 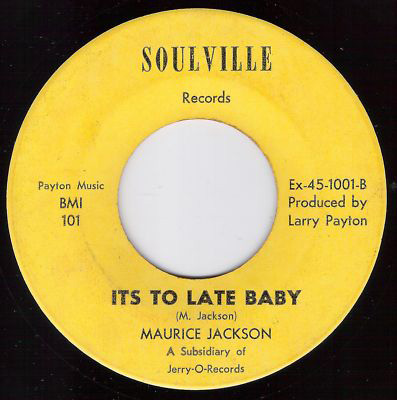 Crucially, Larry’s name appears on the B side of `I Was Wrong` by Maurice Jackson on Soulville Records, `It’s To Late` (sic) as both publisher and producer.  Recorded in September 1964 it had a Motown backing track that had surreptitiously found its way to Chicago without the company’s approval. The fascinating story of this record and the others Larry was involved with are all documented in `Jerry O, On the Record – Off the Wall` published in 2019. His most famous name check came on `Boo-Ga-Loo` by Tom & Jerrio on ABC – Paramount records, this being the national release of another song atop the Motown backing track. He did however have to share the limelight with Chi-Sound Music who muscled in being the favoured R&B publishers on the label. Larry was fortunate not to get sucked into the subsequent legal action that Motown took against ABC as the record was also issued on the Jerry O label with Payton being billed as the sole publisher. 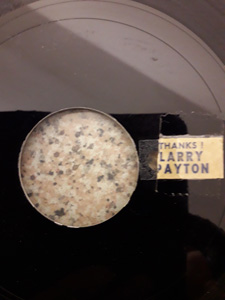 Larry remained involved with Jerry Murray on and off throughout the 60s even when Sammy Kaplan and Murray became partners in Boo Ga Loo Records in Detroit promoting all of Jerry’s 45s on the label and beyond even when LA’s White Whale label took on Murray’s contract. His name as a promoter also crops up on many other Midwest Soul releases. He was also getting more involved in wider Pop promotion work and was an important factor in Vee Jay’s Beatles’ releases in ’66 and their US tour in the same year.  Among others Larry worked for Royal Disc Distributers and Garmisa Distributing Co. 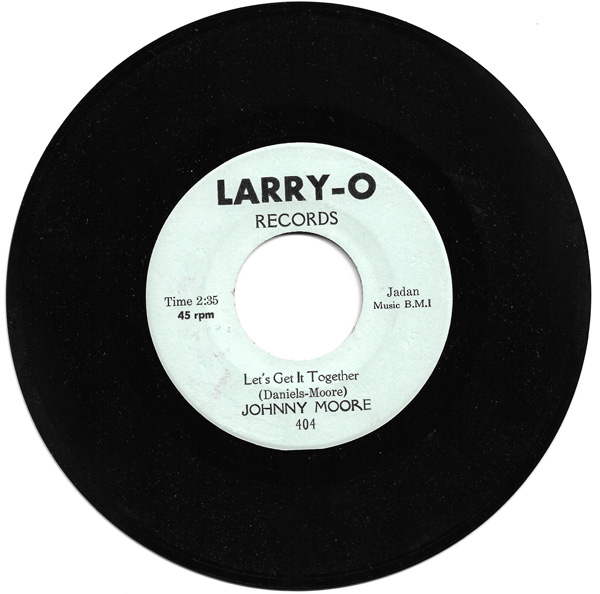 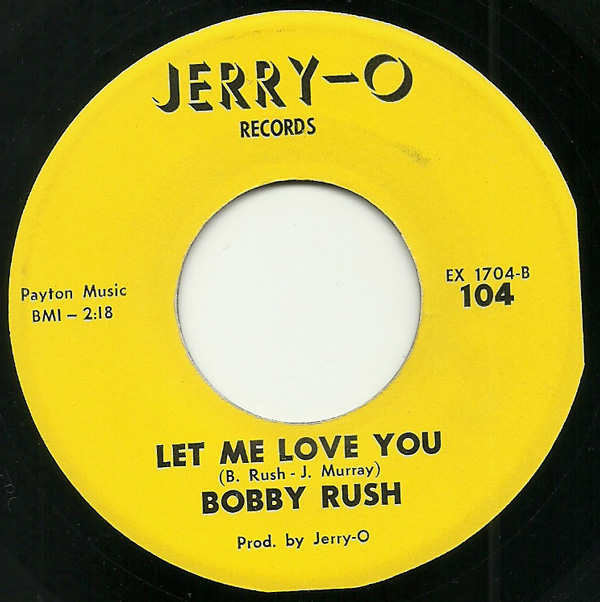 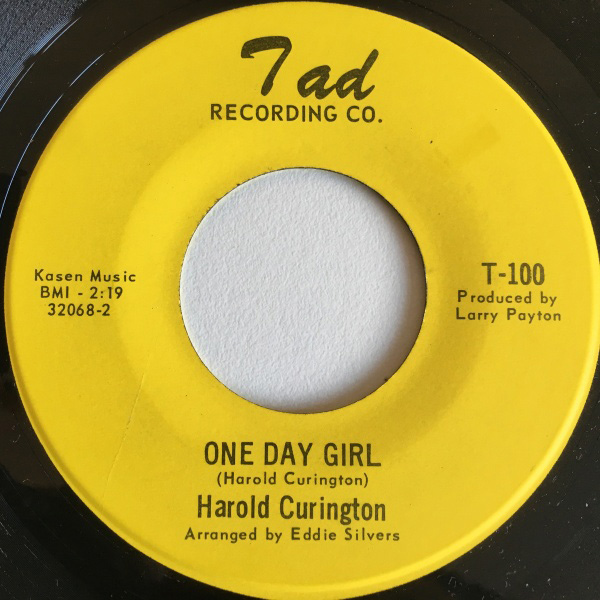 Virtually all of Shawn’s limited knowledge about his father’s work came from other family members but his first personal memory was meeting Jerry Murray around ’68 in a studio when he was only three and recalls his `Funky Four Corners` being played. He also recalls his father promoting the Jacksons who had recorded `Big Boy` in Chicago at One-Derful Records, a version of which was issued on Steeltown Records from Indiana. Shawn also remembers his father’s regular meetings with Chicago’s premier DJ, Herb Kent. 1968 also saw the Larry O label surface for its second release by Johnny Moore, `Let’s Get it Together` but strangely Larry’s name does not appear on the label and I would suggest that he simply facilitated its release which had Four Brothers / Fairshake connections. His name does however appear that year as producer on Harold Curington’s 45 on the Tad label, `African Twist` / `One Day Girl`. Incidentally the ownership of Tad Recording Co is one of Soul’s many unsolved mysteries; it had a second release in ’68 by the Contributors of Soul and a third a year later by the Notations but beyond that little if anything is known. There were Tad labels based in Hollywood in ‘59 and NYC in ’62 but had no connection.

By ‘69 Larry was also involved in tape and record promotion for ABC / Ampex as well as his own freelance work and was a major force behind pushing the film sound track album,` Savage Seven` that Dick Clark had produced for Atco. Such was Larry’s influence that Clark presented him with a jewellery box; hand engraved with “Thanks for breaking the Savage Seven theme” signed Dick Clark. From that era Shawn also recalls his father and Don Cornelius doing promotion work together, Don had a road show that played local record hops called Soul Train that eventually went live on national TV in ’71. Once again research into any connection Larry had with Soul Train is blurred by one Walter Payton who was heavily involved in the show. 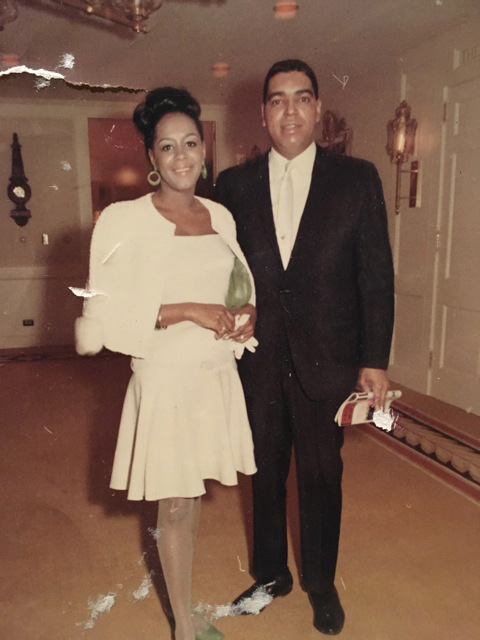 Shawn related that sadly during this late 60s period Larry developed MS but it went undiagnosed for two years until it was discovered in 1970 when the effects began taking their toll. Larry was eventually hospitalised leading to his untimely death in 1972. Such was the severity of the MS in its later stages that a bewildered five year old Shawn recalled that he was unable to comprehend what was happening to his dad.

Larry’s mother later moved to Texas where she still lives, Shawn remained in Chicago where he has a successful career in the media business.