Mainstream had many guises over its life.  Started by Bob Shad in 1964, it initially focussed on issuing Jazz and Soundtrack LP’s, by the mid-sixties it moved onto its second musical phase as it found success with Psych, Garage and Rock bands.  This carried on till the early 70s when its focus again changed, this time to a more Soul/Funk and eventually Disco leaning and it’s this period that this CD focusses on.

The set starts off with Linda Perry’s “I Can’t Give You Up”, which is the first of three tracks by her.  Perry’s first release was the Eddie Billups penned “I Need Someone” on the small Chattanooga label HELPP. This was picked up by Shad who released it on Mainstream for national distribution and it became a minor hit.  This success lead to Perry being brought to New York for further recording session.  “I Can’t Give You Up” was one of the unreleased songs from that session and it’s a great bit of sassy funky female Soul; tight backing singers, rolling rhythm, burping horns and a catchy chorus it’s a shame it was left in the can as I think it’s a good example of the style of releases that were hitting the top of the R&B charts at the time.  “It’s All In The Back Of Me Now” also from that session was one side of her second and last single for Mainstream, it’s a swaying piece Jazzy Soul, which has had numerous plays on the Soul Scene and should be quite well known.  The last of the Perry tracks “Ain’t Nobody Gonna Make Me” was another previously unreleased song, which for me has more of a popular appeal than the other two and sounds as if under the right circumstances, could have also been a hit.

In a similar vein to the Linda Perry’s opening track is another sassy song, this time by Ellering Harding.  “To Whom It May Concern (All I Need)” is one of the two album only tracks included on the CD.  It sounds like a cross between a James Bond theme and a Blaxploitation film score, odd that that sounds I do think it works.  As with many of Bob Shad’s LP projects no expense was spared, with the musician credits reading like a who’s who of best Jazz talent of that time.  The other album only track is Alice Clark’s “Don’t You Care”, which is a well know classic on both the Soul and Jazz scenes.  The song also gained a retrospective single release on Acid Jazz.

Randy Brown’s musical output has been well documented, especially his Parachute/Chocolate City recordings.  After his solitary release on the Stax subsidiary Truth, he released two singles on IX Chains imprint and “It Ain’t Like It Used To Be” is included here.  It’s a great 70s dancer that was heard at many a Modern Soul event up and down the country in the late 80’s/early 90’s.  The other Brown track is “I’m on Sick Leave” it’s a more funkier affair and not as instant as “Ain’t…”, saying that it’s still a nice record.  Both these tracks and their flips initially saw a local release on the tiny Memphis Label, Black Magic.

Along with Randy Brown, another IX Chains release that saw plenty of plays up and down the country was “The Steptones – Let The People Talk”, a quality strings and things dancer from the Detroit group who recorded “Lonely One” on Diamond Jim.  Staying with string laden mid 70s dancers is “The Dramatics – No Rebate On Love”.  Following the groups split in 1972, Elbert Wilkins and Wee Gee Howard broke away and toured with a newly formed group under the same Dramatics name.  They eventually landed a record deal with Mainstream and their first release was “No Rebate…” became a hit, breaking into the top 30 of the R&B charts in 1975.  Legal proceedings from the “old” Dramatics, fronted by Ron Banks, lead to a name change to “The Dramatic Experience”.  They released one further single on Mainstream before parting ways.  In a similar feel to “The Steptones” and “The Dramatics” is “Words Of Wisdom – You’re A Friend Of Mine” a pleasant enough dancer, but nothing earth shattering.  Also popular at a similar time was “The Fantastic Puzzles - Come Back” on New Moon, a lively up-tempo feel-good number, quite odd as it’s all about the lead singer’s girl leaving and him pleading for her to return.

Johnny Gilliam started recording in the mid 60’s and released two singles on IX Chains in “75 & 76” under the name J.G. Lewis.  Following some success of his initial single, “What Am I Going To Do” was his follow up release.  It was another song that was well received by dancers as it had that “Modern Soul” Vibe.  Also included, is the previously unreleased track “I’m The One Who Loves You”.  It’s a good slightly funky southern styled swayer which Gilliam sings well.  The track itself sounds as if it’s a finished song rather than a demo and it’s a shame it never got out the can.  More southern styled soul with Calvin Arnold’s “Satisfy My Woman”, another singer who released a number of singles good on Venture and Sonday before landing at IX Chains.  It’s a nice mid-tempo brass infused number which reached the lower ranks of the R&B top 100.  “Bobby Earl Williams - That’s The Way She Is” was the secondrelease on IX Chains and is an enjoyable brassy 70’s dancer with a funky edge.

Changing the style to more emotive soul is Almeta Lattimore’s anthemic swayer “These Memories”, known by probably everyone and was recently reissued.  Charles Beverly’s “Stop And Think A Minute” was his first release as an artist and what song to begin your career with, it starts off slow and builds all the way through.  McArthur’s “It’s So Real” is an inclusion from the Brown Dog label and is a great piece of Sweet/Group soul, with Willie Jones of the Detroit Group 21ST on lead.  Lee Bates had eight releases on the New Orleans Instant label from 1969 to 1975 and “(What Am I Gonna Do) What Am I Gonna Say” is a nice piano lead mid/down-tempo dancer which ended up his last release on the label.  It must have been a bit of a local hit as it was picked up by IX Chains for national distribution.  I don’t think it did anything nationally as I don’t think it got past the S/S demo stage, as I’ve never an IX Chains issue of this release.

Veteran singer Lenny Welch arrived at Mainstream after a having a couple of releases on Atco.  “A Hundred Pounds Of Pain” was the last of his three singles and although it’s a jaunty number, it doesn’t really do anything for me, but I can understand why it had a following from dancers in the 70’s.  Another song in a similar category is Nia Johnson’s “Plain Out Of Luck”, which to me is just an average Disco record.

All the tracks generally flow well with the exception of the two tracks by “The Jackey Beavers Show”.  Originally issued on Beavers’ Jabar label, this is a fine double sider was picked up by Mainstream for national distribution.  Fantastic as these tracks are, they’re a 1968 release and although there are only two years difference between these and the next oldest tracks the different in style is quite apparent and for me doesn’t really fit into the whole theme of the CD.

Finally comes Sarah Vaughan’s “I Need You More (Than Ever Now)”.  I’ve never really been a big fan of her singing, but this mid-tempo number was a nice treat to finish off the CD.

The compilation duties were fulfilled by Ady Croasdell and as always the booklet is full of artist pictures and label scans with each track getting a detailed write up.  When I first received the disc, I thought playing it would be a pleasant enough way to while away 80 odd minutes.  Once played, memories of a misspent you at Modern Soul nights in late eighties/early nighties came flooding back.  It’s a very enjoyable CD, with a few blips, but that’s just me being picky and I give it a star rating of 4 out of 5. 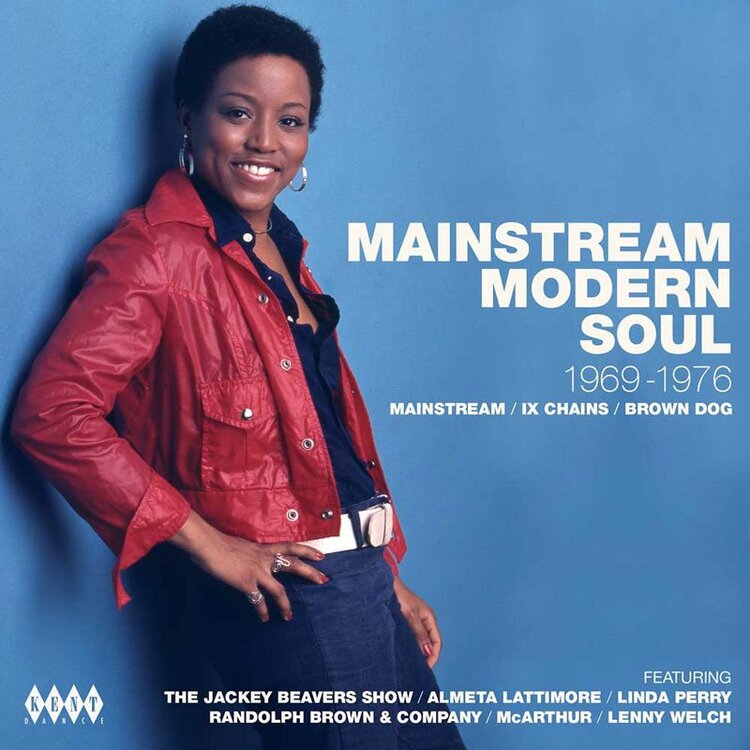