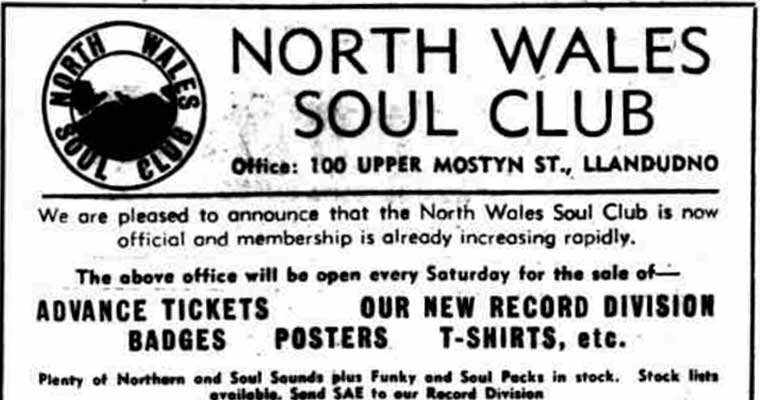 As the years past it seems more and more archival material is becoming available online, local papers just being one available source for looking back.

The British Newspaper archive being just one current source, be a bit wary as once you start digging the hours may fly past.

Used the North Wales Soul Club as an example as it did play a part in my own soul youth, while just a 13 year old kid at the time of the article, memories of a few visits up the stairs to the offices, opposite The London pub on a Saturday do linger along with later trips to the Riverboat.

Mention "soul" and you can guarantee the attention of most young people interested in music. So it is not surprising that the following in this area is enough to warrant a soul club the North Wales Soul Club.

On Saturday the club opens an office at 100 Upper Mostyn Street. Llandudno. The premises will put not only Llandudno but the whole of North Wales well on the map as a "soul scene."

The club already boasting a membership of 200 is the brainchild of Robert Redhead and Gilbert Gilian of Discos Incorporated (Entertainment) Ltd. Llandudno who have been responsible for several promotions during the year, featuring many top name artistes from Britain and the United States. For Robert and Gilbert. May" 18 will see a dream come true. In recent months they have done more for soul fans In North Wales than anyone in the last decade.

Discos Inc. started just over two years ago when Robert and Gilbert Joined forces to provide top .line disco entertainment. They do this using SAI (Sound Advice Installations) equipment, of which they have two independent units, coupled with comprehensive lighting effects. Single records which they carry with them number approximately 1.000 and albums total 50. The transportation of all the equipment could become quite a nightmare, but as it was explained. everything is under control thanks to Robert's father, Mr. Roy Redhead described as "road manager."

Discos Inc. soon became recognised as.one of the leading soul discos in the area, as well as being able to provide music for any occasion, and they decided it was about time fans were given the chance to see the artistes on stage without having to travel considerable distances. Their first promotion was in October of last year when Major Lance made a big impact at the Dixieland Showbar. Colwyn Bay. As Gilbert explained promotions of this nature require a considerable amount. of administration and therefore on March 28 the North Wales Soul Club came into being and presented their first promotion featuring "Limmle and Family Cookin."

As well as providing such entertainment Robert and Gilbert opened a record and badge bar at the dances which proved successful and have now become a feature of their promotions.

Annual membership of the North Wales Soul Club costs 15p and enables soul fans to buy records which they would normally find difficult to obtain without such a service as provided by the club. Soul "packs" will be on sale along with American imports and albums.

Members will also be able to buy ticket in advance for dances in and out of the area, as the promoters are official ticket agents for the Northern and International Soul Clubs, with whom they will be in close contact. 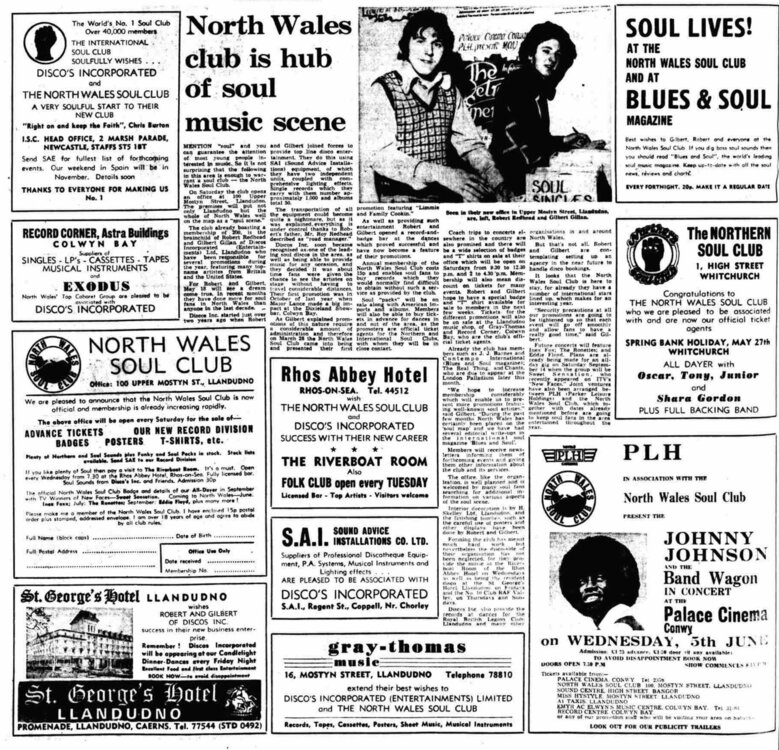