a hotbed for music 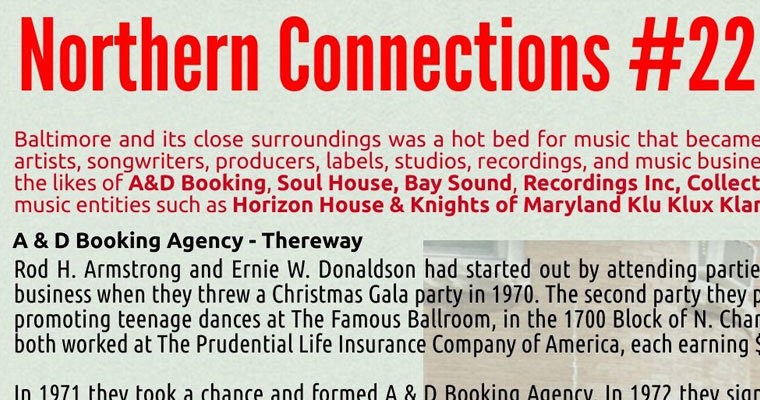 Site note - The most recent Northern Soul Connection of 2020, we are now at #22 in this long running series from Ken B aka Soul Source member @Kenb and this time around the focus is on Baltimore.

Northern Connections #22 not just birthplace of the U.S. national anthem, "The Star-Spangled Banner" Baltimore and its close surroundings was a hotbed for music that became popular for our genre of Soul. The rosta of artists, songwriters, producers, labels, studios, recordings, and music business men and women is a long one and includes the likes of A&D Booking,  Soul House, Horizon House & Knights of Maryland Klu Klux Klan, Bay Sound, Recordings Inc, Collection & The Civics, as well as not so many non-music entities such as and Some familiar-some lesser known.

Rod H. Armstrong and Ernie W. Donaldson had started out by attending parties together, and quickly turned that love into a business when they threw a Christmas Gala party in 1970. The second party they put on netted them $1000 which they invested in promoting teenage dances at The Famous Ballroom, in the 1700 Block of N. Charles St. They were both in their mid-thirties, and both worked at The Prudential Life Insurance Company of America, each earning $12K to $1 SK p.a.

In 1971 they took a chance and formed A & D Booking Agency. In 1972 they signed Elanor Mills, The Titans, and The Soft-Tones (managed by Roe-Don Management Company, as too were Chang or & Co) and put Ira Glover on a 10 week tour of Canada leaving July 23rd. In 1973 they brought First Class together, and by 1975 they were grossing ....

You can check out Kens other quality 21 Northern Connections all available via his 'activity' profile page, the link follows below...