Compiled by Russ Winstanley & Richard Searling. This chart was published in Record Mirror weekly for several months during 1975

From the Mecca of British Soul

You've Come A Long Way Baby - Flower Shoppe
Let Me Do It - The Bells
Going To A Go·Go -The Sharonettes
The Day My Heart Stood Still - Ollie Jackson
I'm comlng home in The Morning - Lou Pride
Cracking Up Over You - Tommy Hunt
Get Out -Tommy Hunt
Zola - King Errisson
I Can't Help Myself - Johnny Ross and The Soul Explosion
Send him Back -= The Pointer Sisters
The Trip -Dave Mitchell and the screamers
Runaway - The Chantells
Spellbound - Tamiko .Jones
Mine Exclusively - Fred Orchestra
You Touched me - Judy Clay
Can't Chance a breakup - Ike and Tina Trner
Groovy Feeling -Tobbi Bowe
She'll Come Running back - Mel Brittt
Set My Heart At Ease - Nikki Farrow
Breakaway (vocal and instrumental ) - Ernie Bush 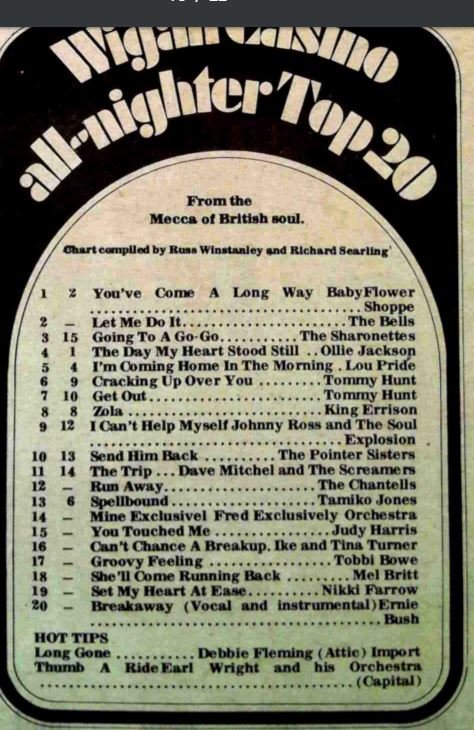