In 2008 Soul Junction Records issued a cd album project on the Detroit group, The Falcons entitled “Good, Good Feelings” which featured their entire Big Wheel label output. The album also featured both sides of the then unknown artist Sandy Hollis’s Big Wheel 45 “I’m Tempted/Tables Will Turn” which incidentally featured The Falcon’s on backing vocals. Now having spent many years tracking down artists in the pursuit of records and master tapes it made a welcome change when one tracked me down.

During 2018, out of the blue I received an e-mail via the Soul Junction website from a mysterious Dr Barbara R. Weems congratulating the label on exposing her solo 45 release to a worldwide audience and politely asking if she could purchase some copies of the aforementioned album to give to her children as a memento of her younger days as a performing artist. So after curiously replying to the e-mail, came the following revelation that the aforementioned Dr Barbara Weems was none other than the former Big Wheel recording artist, Sandy Hollis! So after agreeing to be interviewed Barbara a.k.a Sandy Hollis life story began to unfold: 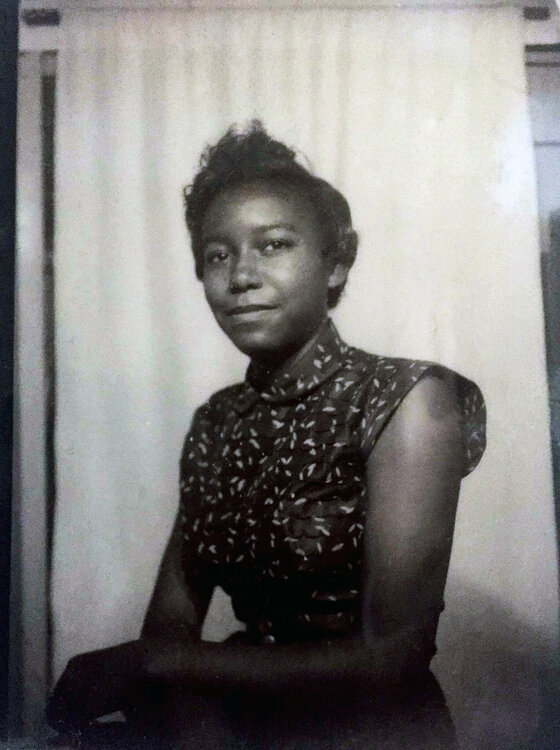 Barbara Ruth Harris was born in Tallassee, Alabama during 1942, due to her birth parents never cementing their relationship Barbara was adopted and raised by her Grandmother, Lizzie Harris.

Although she briefly joined her birth father between the ages of 9 and 10, she was later forced to return to her grandmother in Tallassee as a ward of the Alabama State Adoption services. Upon reaching the age of 18 and graduating from High School her mother came south and took her back to Detroit. Once in the Motor City, Barbara’s first job was as a Soda-Jerker, the name given to a person usually a young teenager who operated the Soda fountain in the local Drug Store. Barbara would later marry her first husband, Jerry Weems, during 1962 reared two sons Steven and Gregory. Although Jerry and Barbara later divorced, she continued to use the surname of Weems. 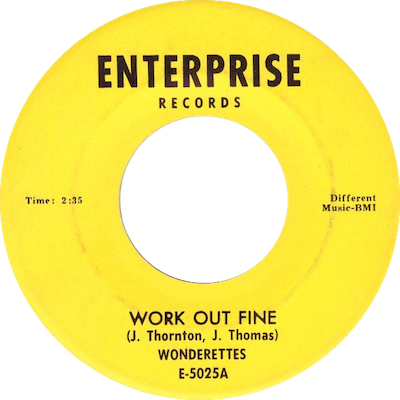 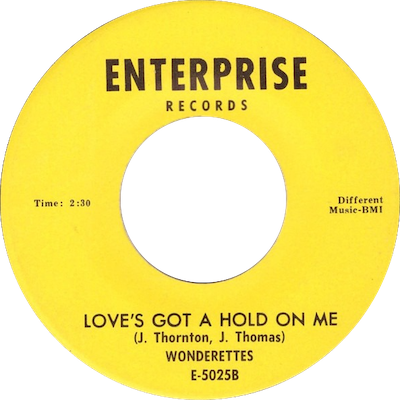 Between several day jobs, Barbara was a member of a all girl’s singing group, ‘The Wonderettes’ who mainly performed at local Sock Hops. During 1964 The Wonderettes with Barbara in their line-up recorded their first 45 single entitled “Work Out Fine/Love’s Got A Hold On Me” for local Detroit record distributor Bobby Schwartz’s Enterprise label. Barbara would leave the group during the same year, with the remaining 3 girls Joan Rutledge, Lavernah Williams and Rose Johnson (Later known as Rose St. John) going onto record The Northern Soul Classic “I Feel Strange/ Wait Until Tonight” also for Bobby Schwartz’s Local Ruby label (later leased to United Artists) followed by their two other notable releases, both credited as Rose St. John And The Wonderettes “Mend My Broken Heart/And If I Had My Way” again on United Artists followed by “I Know The Meaning/Fool Don’t Laugh” this time on the U.A subsidiary label Veep. The Wonderettes are also credited as backing vocalists on Johnnie Mae Mathews “Cut Me Loose”, Art and Atco labels respectively. They also featured, although uncredited as the backing vocalists on fellow stablemate Sam E. Solo’s “Tears Keep Falling/Love Is Not A Game” also released on Ruby and later U.A’s subsidiary Imperial label. It is believed that a young singer by the name of Alton Holliwell also played some part in the forming of The Wonderettes.

Alton ‘Bart’ Holliwell was best known initially for being a member of the vocal male Doo-Wop group, The Fabulous Playboys whom he had joined to replace their original bass vocalist Frank Holt. The other Fabulous Playboys members were Carlis “Sonny” Munro (Lead), James “Ooh Wee” Gibson (First Tenor) and Johnny Alvin (Second Tenor and Baritone). The Fabulous Playboys were later recruited by the Lupine label owner Robert West, the former manager of the original Falcon’s which had at various times featured Joe Stubbs, Mack Rice, Eddie Floyd and later Wilson Pickett. Following the break-up of this version of the Falcons, West recruited The Fabulous Playboys and in doing so persuaded them to take over the name and contractual obligations of the original Falcons. This new look Falcons recorded the Lupine 45 “Has It Happened To You Yet/Lonely Nights” as well as providing backing vocals on other Lupine artist’s releases. During 1966 Robert West was shot, but not killed. The severity of his injuries brought Lupine records to a halt. The Falcon’s were now without a label or manager when in stepped Frank Kosian, a former employee of Shaw’s Management company in New York and his new venture the Big Wheel label. Kosian financed the group’s first session under his command at Golden World Studio’s which yielded their 2 million plus seller “Standing On Guard/I Can’t Help It” and “(I’m A Fool I Must Love You)” under the direction of Dale Warren. 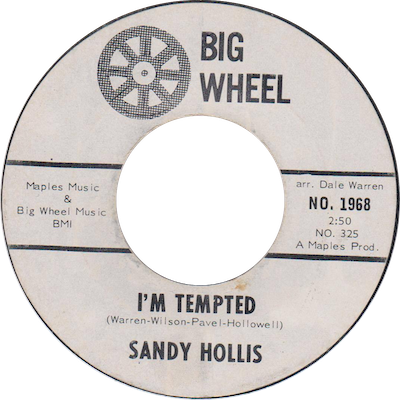 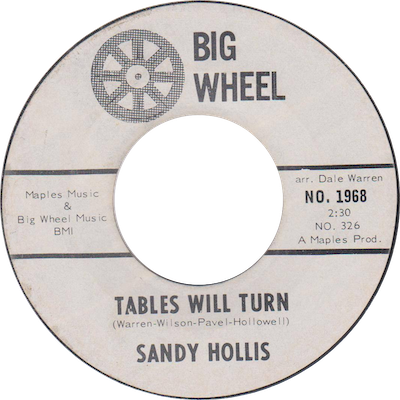 In a follow up session, a further Big Wheel 45 release was recorded by a little known 24 year old girl singer, Sandy Hollis, entitled, “I’m Tempted/Tables Will Turn”. Both sides featured the Falcon’s on backing vocals with the A-side being more of a duet, due to the emotional vocal interchanges between Sandy and Alton. While on the b-side, Sandy’s excellent dramatic vocals stand out in their own right. The story behind Barbara using the pseudonym Sandy Hollis came about as follows, Barbara by then, was in a relationship with Alton Holliwell and it was he who introduced Barbara’s vocal talents to Frank Kosian with Frank deciding to record the aforementioned 45 on her. It was also Alton who came up with the idea of using the name of Sandy Hollis which was a abbreviation of Cassandra Holliwell the name of his new born niece. As good as Sandy’s record was and still is, it suffered from being under promoted with Kosian throwing all his promotional weight behind The Falcons and his other more established Detroit soulstress Betty La Vette on her raucous Big Wheel outing “I’m Holding On”.Barbara, still using the performing name of Sandy Hollis continued to work on the Detroit Club/Lounge circuit mainly performing standards of the day, before joining Motown Records in a secretarial position, without ever mentioning her earlier attempts at a recording career I might add.

After attending University, she graduated as a Professor of Communication and a Speech Pathologist. She later inherited a property in Las Vegas from her birth father where she spends her winters, returning to Detroit during the summer months. Barbara has always used the name Barbara R. Weems for her research and professional work that has been published in several notable journals. She also became a fiction writer and has published two novels thus far entitled, “Finding Home” and “Grace Is Sufficient” with a third on the way, for which she still uses the pseudonym of ‘Sandi Hollis’ (but now substituting the letter y with an i). Although first retiring in 1992/93, Barbara soon returned as a Speech Pathologist serving young children, with another three attempts at retirement to follow. Barbara later remarried for a second time to Bruce Mitchell, again divorcing. From a later nine year relationship Barbara has a daughter Erin, who is married to an Englishman and currently lives in Christchurch, Dorset, England, which means Barbara has become a regular visitor to the UK in recent times (pre Covid pandemic that is). Erin has continued in her mother’s footsteps to this day as a jazz /blues singer. Barbara would like to add: “The Sandy Hollis years were some of the most enjoyable times of my very fulfilled life. As a performing artist hearing the applause and seeing the joy on the smiling faces of my audience it made it all the more worthwhile … humm … perhaps it’s time to revive Sandy Hollis “. 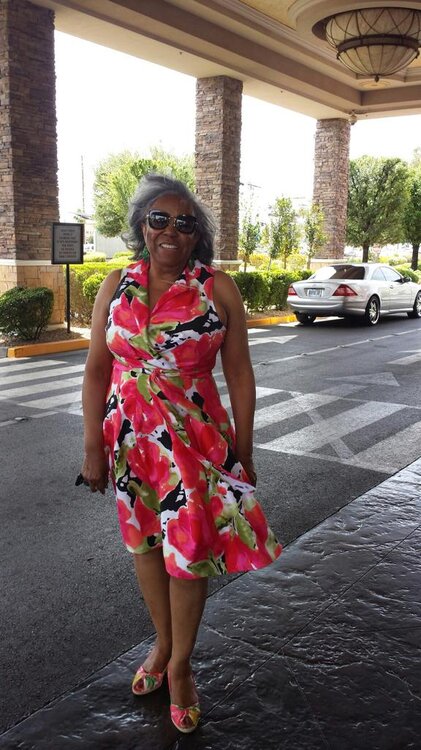 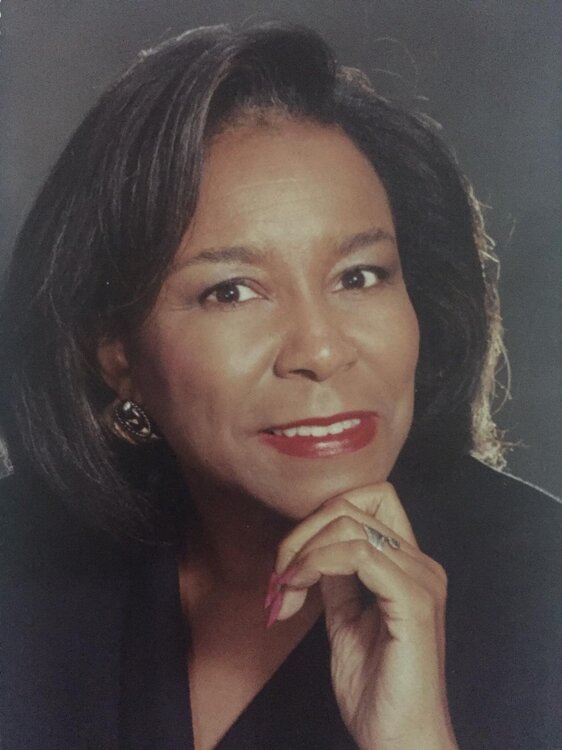