The A & R Man by William Mickey Stevenson - Book Review

Unfortunately this book hits neither of those targets particularly well !

Perhaps my expectations were too high ? I’ll admit that I read books like this to gather all the minute details of the background information that only people like Mickey Stevenson would know, but if this book isn’t written for the geeks and anoraks who is it written for ? Surely the average Motown fan in the street isn’t going to a) have heard of Mickey Stevenson, and b) be interested in what the A & R man at Motown did anyway?

Onto the book itself though; Written in a very conversational style, it really does seem as though it’s a chat that has been written down and turned into a book. There are 59 chapters ! in a book consisting of 243 pages, do the maths yourself. Admittedly some run to more than a couple of pages, but some are by the same token ridiculously short.

In fact that’s what the book is throughout, short. Short on detail. I don’t think there is a single date mentioned in the whole book, yet this is a man that was there at the conception of Motown. A man who was involved, with no exceptions, with every single artist that walked through the doors of Motown. He auditioned so many acts it’s unbelievable how many artists got their recording contracts, and went on to become known the whole world over through this man. He must have a wealth of stories that haven’t been told about those singers. Unfortunately, they still are untold.

I’m sorry, this could have been a great book, especially if had been done through a publisher with an editor rather than self published through Amazon.

Make your own minds up of course, but from me this would only get 3 stars out of five, and that’s being generous. 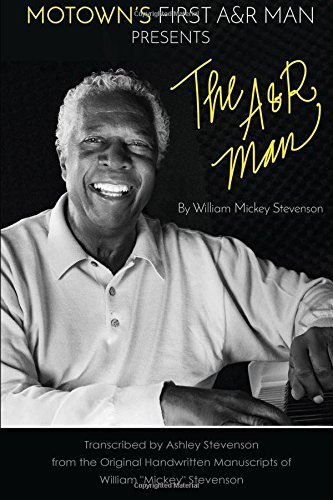 The A & R Man by William Mickey Stevenson