From the book 'It's Better to Cry' by E. Mark Windle

This Wilmington, North Carolina band was largely composed of high school students. Their sole 45 release was a very competent beach cover of The O’Jay’s Minit classic “Hold on” on a local Wilmington label in 1968. As The O’Jays version was already a northern soul classic, it was perhaps not surprising that The Generation’s take (Mockingbird MR 1010) would also find favour on the British soul scene. An up-tempo soul dancer, this track is not dissimilar to The O’Jays, other than the blue-eyed vocal presence and a short organ break characteristic of many beach bands. Wigan Casino DJ Richard Searling originally acquired it from John Anderson at Soul Bowl in 1976 and was first to play this on the UK scene. The track was covered up as The Soul Generation – a risky cover up name perhaps, yet its true identity remained unknown to the scene for at least 18 months and it was even released with the cover up name on UK RCA’s northern soul reissue label (Grapevine GRP 131).

Band members were Eddie Miller (rhythm guitar, lead vocal), his brother Bobby Miller (bass guitar, backing vocal), Robert Bordeaux (lead guitar, backing vocal), Chuck Shipton (keyboards) and Randy Luther (drums). Eddie Miller, lead singer for The Generation, still performs today with the Jamie Band throughout the Carolinas. He describes the band’s influences at the time as a mix of the British Invasion and soul – The Beatles, The Who, The Rolling Stones and The Moody Blues, but also Sam and Dave, The Spencer Davis Group, Wilson Pickett and Ray Charles. He also remembered recording “Hold On”.

The Mockingbird label was the brainchild of ‘Doc’ Johnson, a Wilmington local who had his own recording studio and label. The studio and label slogan was “Listen to the Mockingbird”. There were a couple of other soul orientated releases on Doc Johnson’s label, including the 1969 release by King Louie and the Court Jesters (MR 1007) “I’ve Been Down So Long” a deep soul ballad, with the funk flip “Broadway Up Tight” (King went on a year later to cut sessions, unreleased at the time, at Reflection Recording Studios in Charlotte, NC, backed by what was essentially The Tempests). The Generation were together for two years, from the spring of 1967 until 1969. 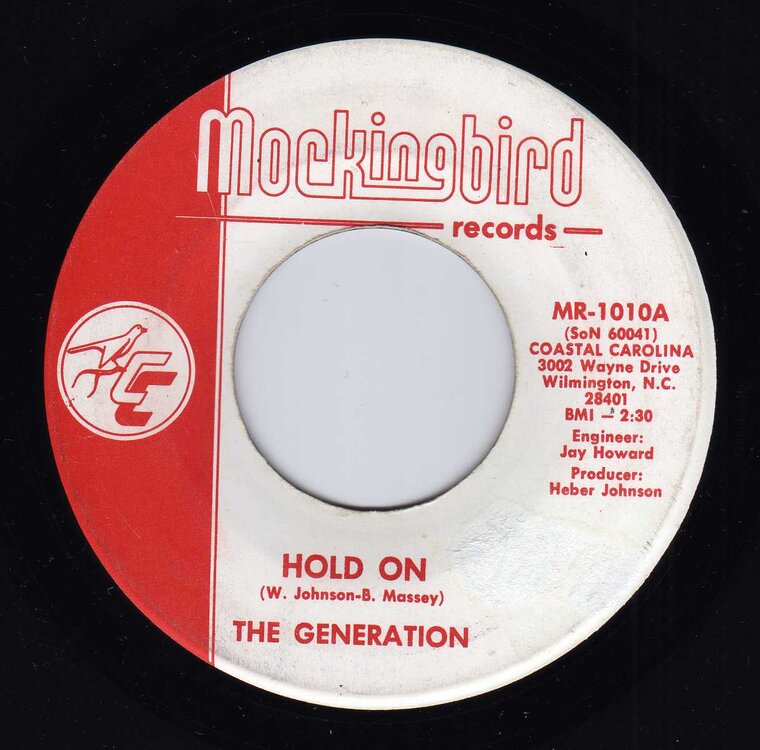 “Eddie, Robert, Bobby and I originally attended New Hanover High School” says Chuck Shipton. “Randy Luther had graduated High School in Statesville NC and came to Wrightsville Beach. He became our drummer in 1967. In 1968 Hoggard High School was opened and Bobby and Eddie went there. Randy was our leader and influenced our music more toward Motown and soul. He picked “Hold On” to be recorded at Dr. Hubert Johnson’s recording studio around 1967/68. Mockingbird was the studio label. Doc Johnson was a doctor in Wilmington who had a love for music and enjoyed recording as a hobby. He had built a recording studio in a single car size garage on the back of his house at basement level. It had a small control room in it, say 5 by 10 feet, and an old 16 track reel to reel recorder. A local DJ called Jay Howard was the sound engineer and did the mixing on a 16 channel tube type mixer. We recorded the rhythm tracks for “Hold On” in two takes. The vocals were added later. “Lonely Sea” (originally done by the Ventures) was Dr. Johnson’s favourite even though it was on the “B”side. We did several takes because Doc wanted the drums to do a large symbol crash like the waves crashing. I thought it was over the top because the crash was so overpowering, but we did it the way Doc wanted because he wasn’t charging us studio time. Jay Howard was the prime time DJ on WGNI radio station and he played our record all the time. He even used “Lonely Sea” for a lead in to the news.”

“We were booked by Jack Ford Theatrical Agency out of Tampa, Florida. In June 1968 we went on tour. My mother has film of the band playing in the Battle of the Bands in Wilmington 1968. The Generation played 30 days in Myrtle Beach, SC at the Bowery, a bar on the boardwalk of Myrtle Beach. We then did Clearwater, Florida where we played at the Bon Ton Club with “Strawberry Alarm Clock” and did other gigs around Tampa. In Florida, we had a disagreement and The Generation broke up in August 1968. When we returned to Wilmington we formed the Fifth Generation with a new drummer (Mickey Watson) and new lead guitar (Stacy Jackson). We were together through the summer of 1969 and were booked by Ted Hall’s Hit Attractions. Eventually Bobby joined the military and I got married. Eddie, Stacy, and Mickey got a new bass player (Bobby Stover) and formed Jamie. I went with the Brass Park in the fall of 1969. We had a reunion of The Generation, Soul Six, and Brass Park October 2010 and played for a High School reunion at Wrightsville beach recently.”

Bobby Miller has passed away. Eddie has remained in contact with the other three members. Chuck shared this email from Randy Luther:

“Hey, Chuck and Robert! It's been a long, long time. I hope you guys are doing well. I am the world's worst at keeping in touch with people. I have seen Eddie a couple times over the years, but I didn't even know where you guys are. I was saddened to hear that Bobby passed away. Who would have thought that "Hold On" would have reached England in the 70s, much less that someone still has interest in it and the band today. Very cool. I am curious about how many copies have been sold and who released it on a different label. I still have a copy of "Hold On" and the original recording contract we signed with Doc Johnson. I stopped playing professionally in 1978. I have done a few gigs and a couple of recording sessions since, but I got kinda of burned out on the business part of music in general, and especially the New York scene. I played with some great players and bands though. I have a fantastic drum studio in my home now, and I still play a couple of hours a day. My style and technique have developed over the years into something I am very proud of. I even got some great reviews from Rolling Stone magazine when I was with Warner Brothers in New York. These days I mostly stick with blues and R&B. I have fond memories of playing with you guys in The Generation. The music we played was clean, tight and fun.”