The memorabilia available to collectors of Berry Gordy’s Motown and its subsidiary labels and companies covers the whole spectrum of artefacts. From rare unreleased acetates that never made it past the infamous Friday quality control meetings to The Supremes vintage advertising on wrappers of loaves of bread, the Motown collector’s thirst for all things ‘Hitsville’ knows no bounds. In the past I’ve found every type of artefact from beer glasses to Hot Rod engines that have borne some branded connection to West Grand Boulevard. I’ve even found a teenagers handbag bearing the “Stop!” sign that was manufactured as a Motown inspired item that some Madison Avenue middle ranking executive must have thought was gonna get him up another rung of the corporate ladder! 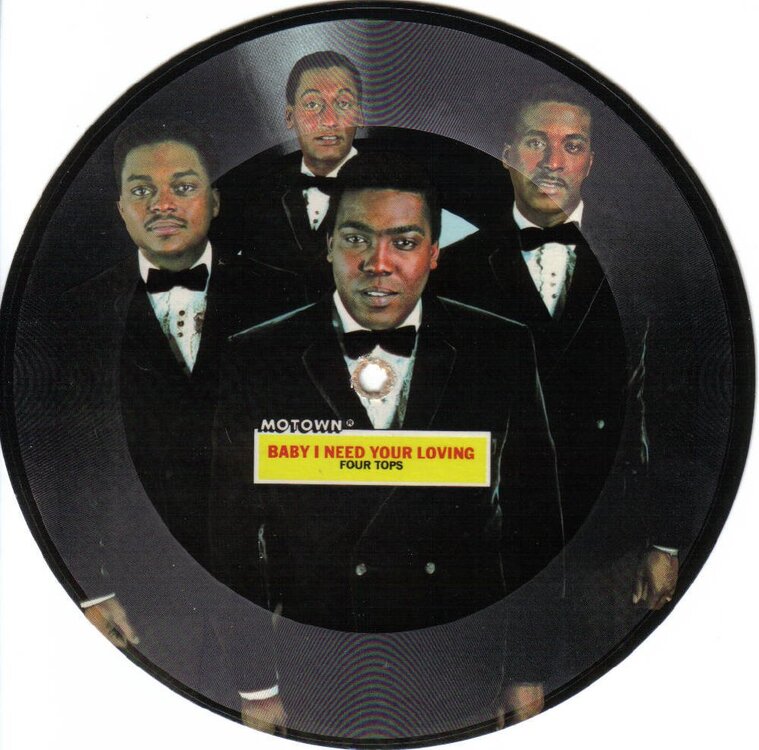 Don’t worry, we’re not gonna spend the few minutes discussing the bakerlite telephone used by Martha Reeves when she entered 2648 WGB as a temporary stand in receptionist or the number of sequins in the glove used by Michael Jackson. (A Motown fan who shall remain anonymous actually knows the answer to that question - I kid you not!) We are however, over the next few paragraphs, going to discover that not all Berry Gordy’s collectible 45s were in fact made of vinyl/styrene and that the picture disc which became popular with record companies in the 80s were in fact, a rehash of a sixties promotional tool. Oh yes indeedy. 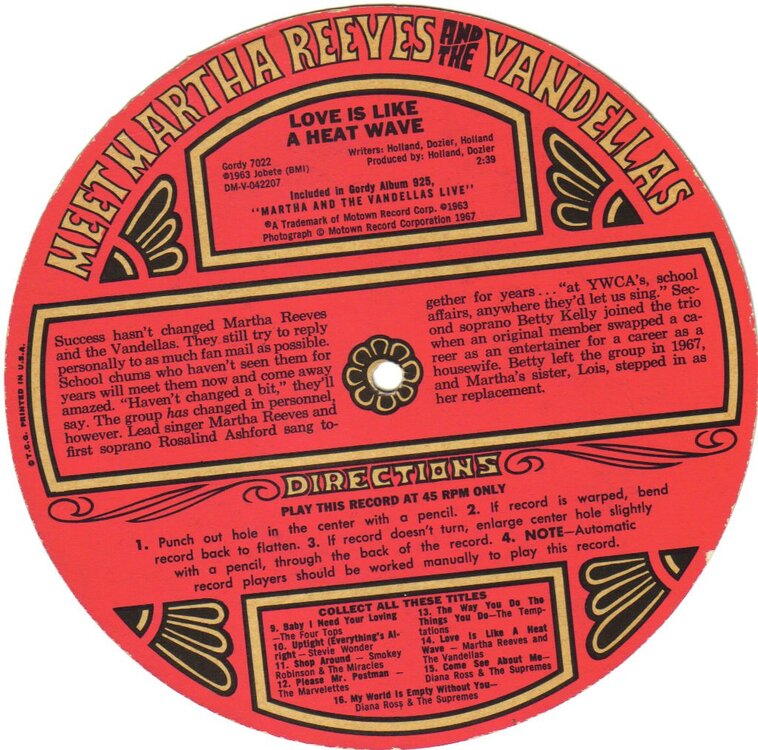 TOPPS, an American company better known for baseball cards, sold cardboard flexi picture records of Motown stars in the late 60s that included a stick of bubble gum from candy stores for fifteen cents. I’m not 100% sure as to whether they were manufactured under licence from Gordy or whether he commissioned them himself but either way whoever made the decision opened up a whole can of worms for collectors a few decades later. The title of this feature is taken from what is usually the first question people ask when they see the discs. The answer is a resounding “Yesiree!” However, unlike the similar, (but smaller), Philco Rocket Record series that the ford Motor Company manufactured around the same time, the TOPPS 45s don’t require a specific record player and can be played on a generic standard turntable as long as it has a 45rpm speed. 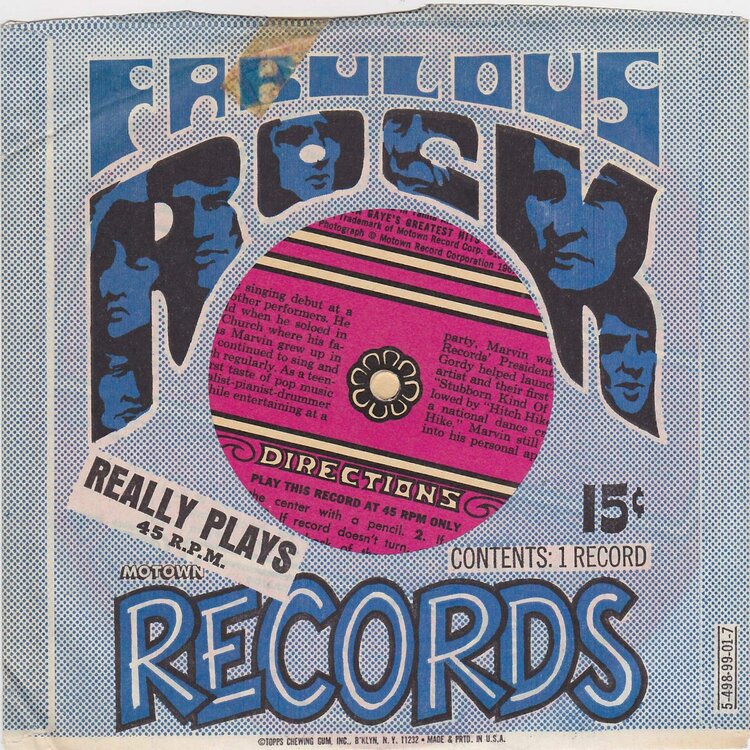 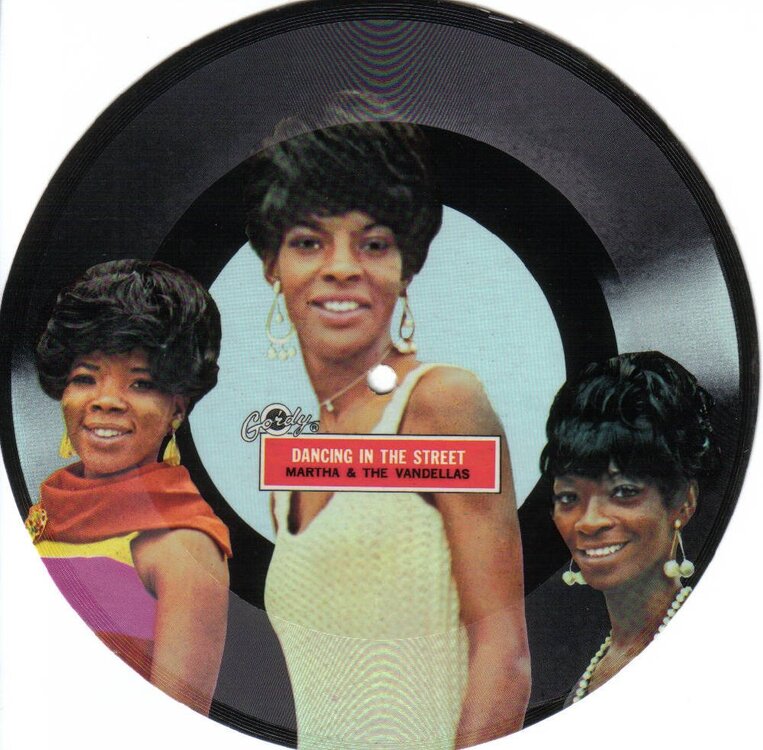 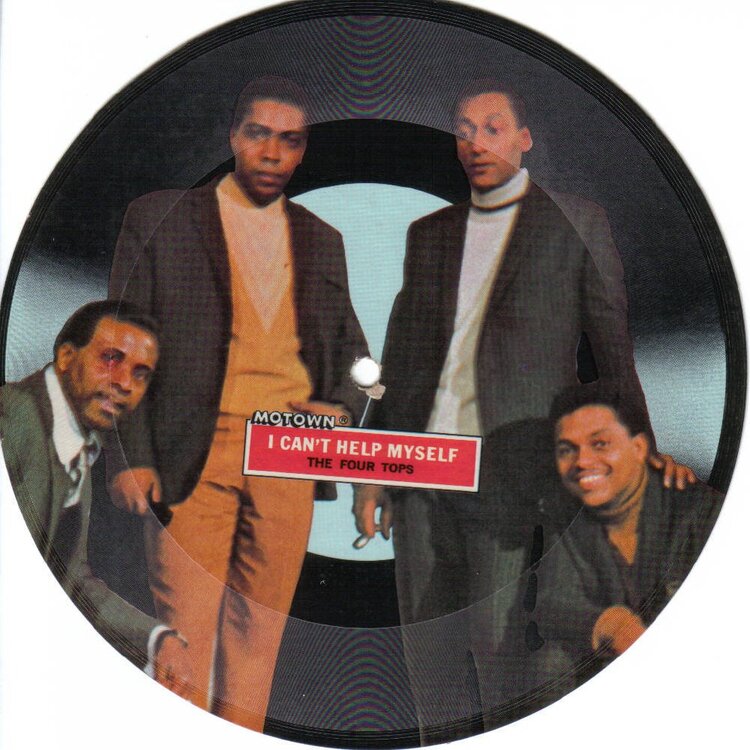 Granted that the records are made of cardboard, are 40 years old and were sold as a disposable item with that other piece of Americana, bubble gum, it will come as no surprise that mint, sleeved copies of the discs are now very much sought after by Motown collectors worldwide. Along with the company’s picture sleeves, EPs and mini LPs they provide a slice of memorabilia from the vintage years of the company’s success that is unusual, and the set is pretty good to look at as well as to listen to. Many people confuse these discs with cereal company giveaways. The cereal discs that used the Motown connection are in fact unrelated to the TOPPS company and were issued as a completely separate entity and were a later promotion using The Jackson 5 as the conduit. It’s also worth noting too that many of the discs, when you find them for sale, are actually glued either together, (back to back), or have been glued to another record from the era. I suppose their original owners thought this would make them play better but of course 40 years later it’s a pain in the proverbial trying to separate them. In fact I gave up after a couple of attempts and simply accepted the fact that I’d have to find them as separate discs. It also of course destroys the flip side graphics and the bio of the artists of course. Same frustration when you see a nice UK rarity with the centre dinked out eh? GRRRR! 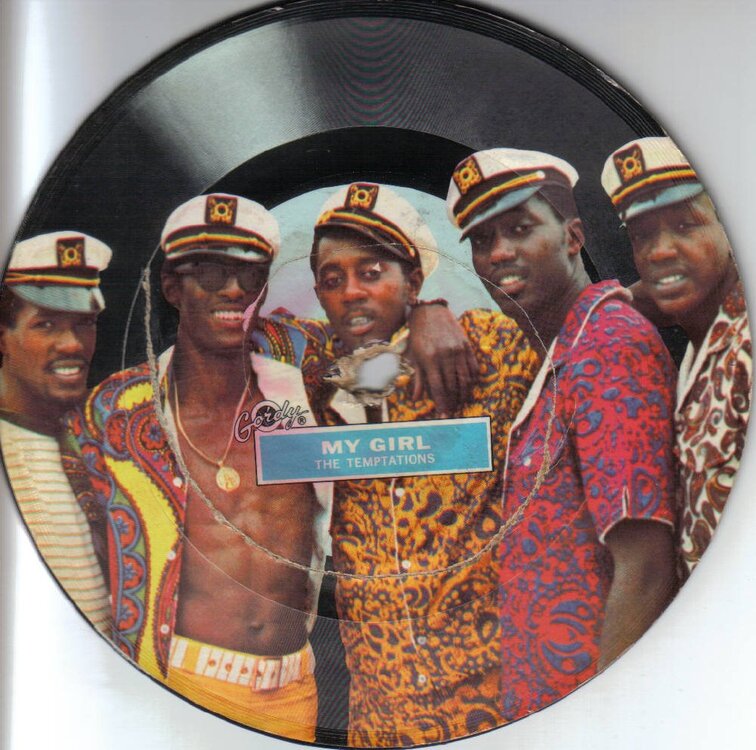 Each of the TOPPS record has a playable song that the artist has had a hit with on one side with a brief synopsis of the artist/group on the flip side. All the records included on the discs were both Pop and RnB chart hits so there are no out and out Northern Soul rarities included but rather it’s a time-capsule of 1967 and the success Motown had experienced with its top stars up to that period. Some of the pictures of the groups are worth the cost of the disc alone as they are pretty much unique in that they don’t appear on LP covers or picture sleeves. A good example of this is the 1004 — The Temptations — My Girl which portrays the group in a relaxed pose dressed in tropical shirts and adorned with ships captain’s hats. Most of the discs show a good quality vintage colour photograph of the artist and are worth collecting for this feature alone. 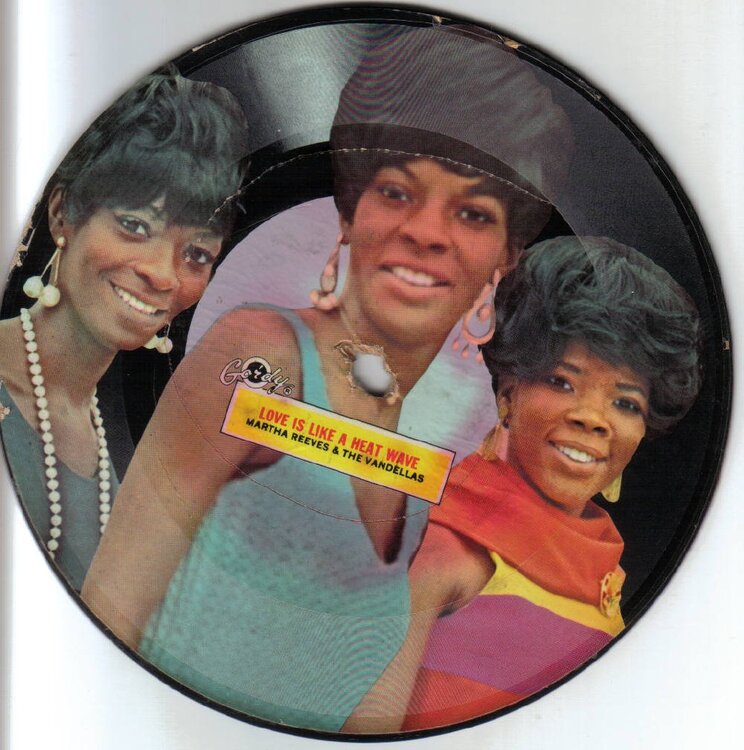 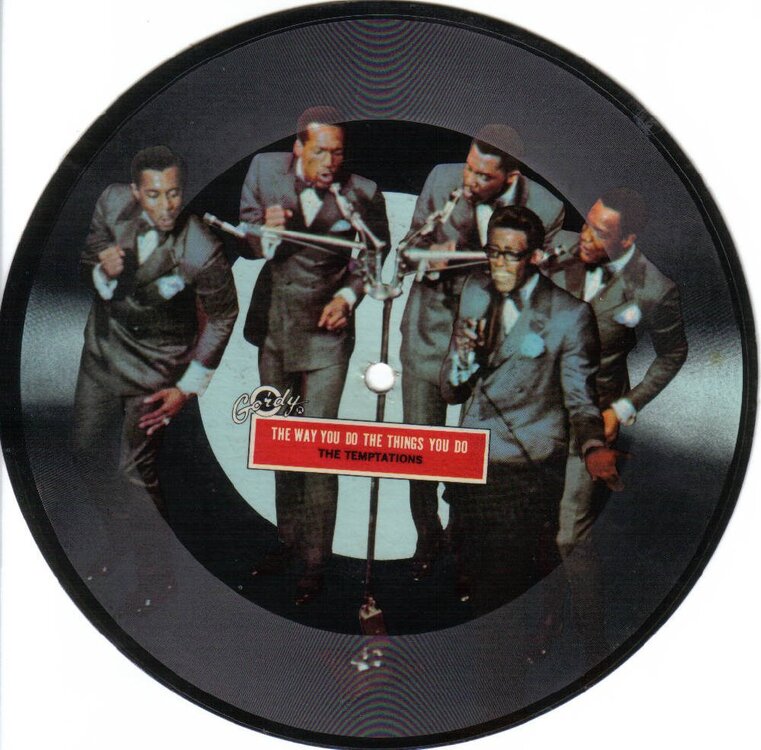 All the really major Motown acts are represented in the set and, like all sets of collectables, there are some that you can’t help tripping over at record fairs, garage sales etc but there are others that are much harder to find, especially in Mint condition. For instance 1007 Martha and The Vandellas - Dancing In The Street can usually be picked up for a few dollars whilst in my experience the 1011 The Miracles — Shop Around is particularly hard to locate in reasonable condition. Similarly 1013 The Temptations - The Way You The Things You Do also appears to be difficult to add to your collection in mint condition and is probably the best picture of all the discs. The group is shown in classic pose during a show with David Ruffin out front and the remaining guys wrapped around their trademark mike stand. 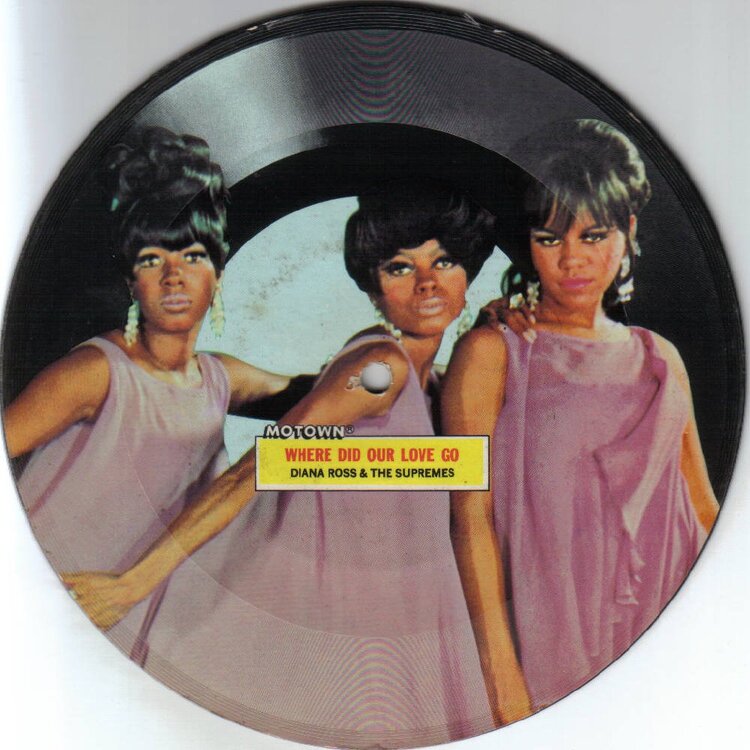 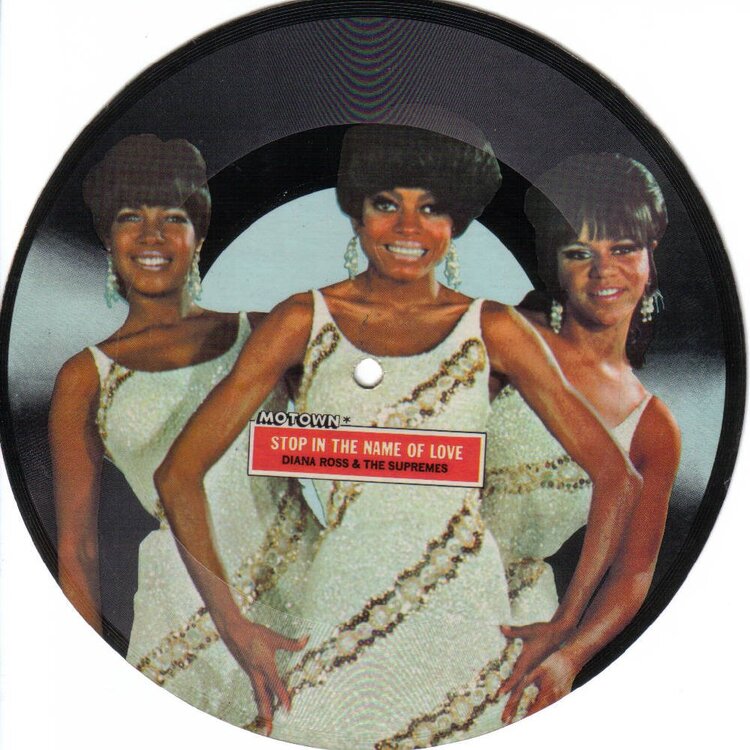 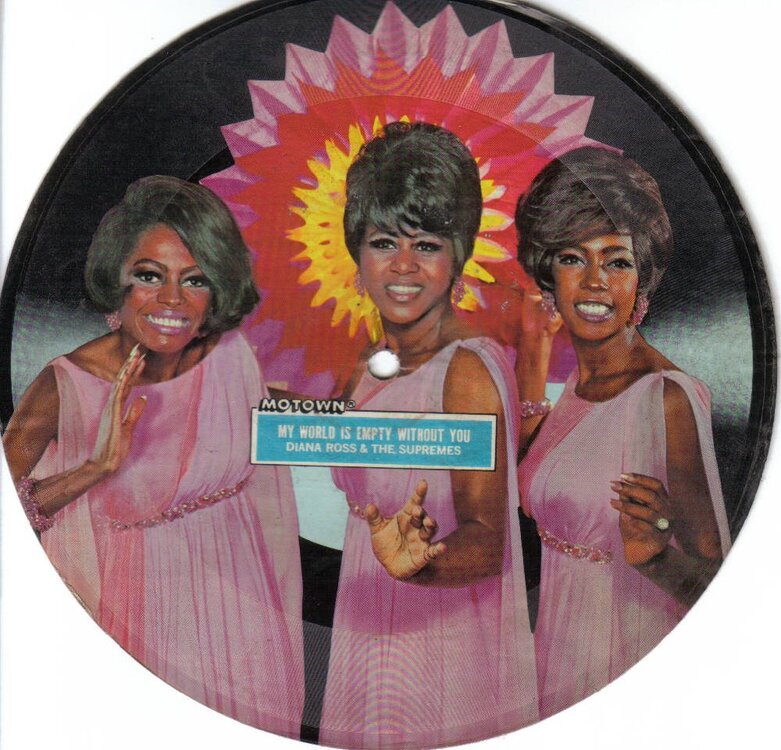 The best representation on the discs in my opinion goes to The Supremes. The group is featured at the height of its popularity and shows the original Hitsville line up of Diana, Flo and Mary in four classic poses from their heyday. Where Did Our Love Go and My World Is Empty Without You were probably from the same photo session as the girls are shown wearing the same dresses* but the latter is somewhat of a special photo, in that it shows Florence Ballard front and centre. Not many press/PR pictures show Ms Ballard as the centre image. 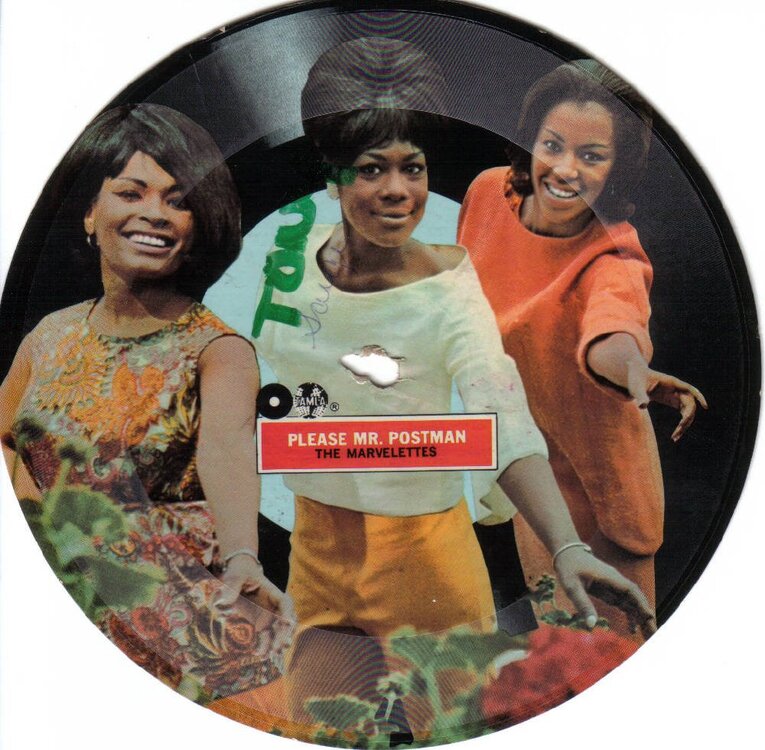 It must have been company policy to utilise a set wardrobe for these publicity shoots as many artists can be found on pictures wearing the same outfits. Probably the most noticeable “double up” is the green dress worn by Kim Weston for the MGM LP. It’s exactly the same dress as seen worn by The Marvelettes in their classic LP. I also seem to recall seeing a vintage picture Martha and The Vandellas in the same outfits. 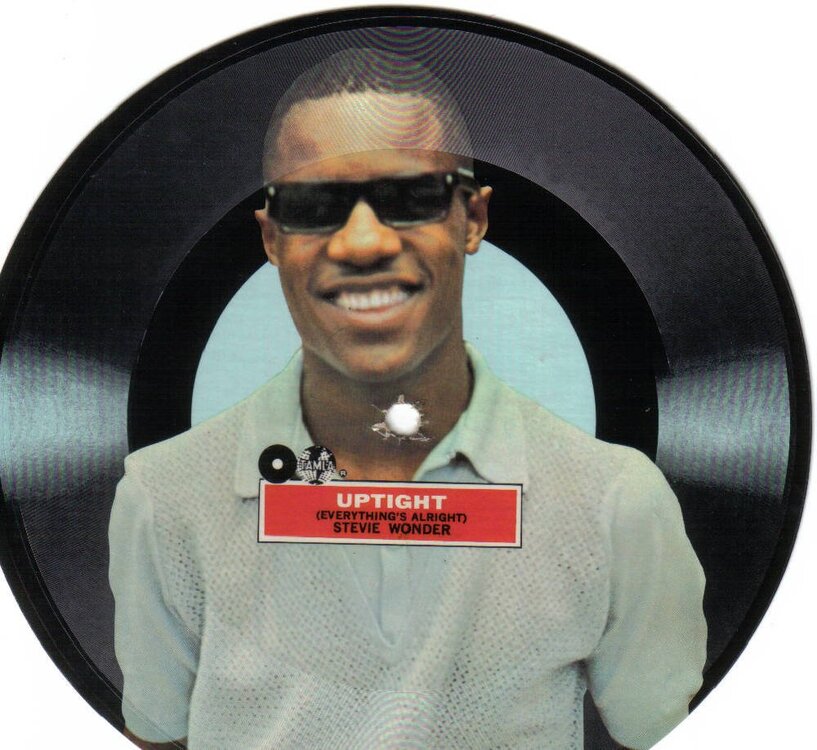 I’ve attached a complete set of the discs here but have to confess that The Miracle ‘Shop Around” doesn’t belong to me so if anyone can help me out with that last one I’d be grateful. In fact if you could all bombard Mr Rod Shard with threats of dismemberment unless he takes the one off the inside of the lid of his old rekkid box for me that would also work! 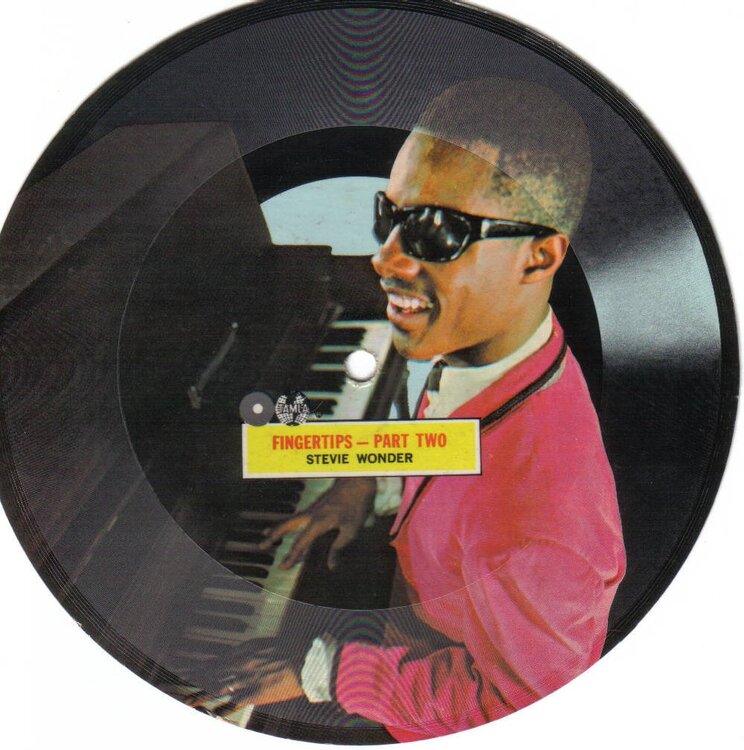 So, there we have it…a slice of Motown memorabilia that don’t cost the Earth, looks good, takes a while to put together I good nick and ……you can play ‘em! What’s not to like about this collecting palaver eh? 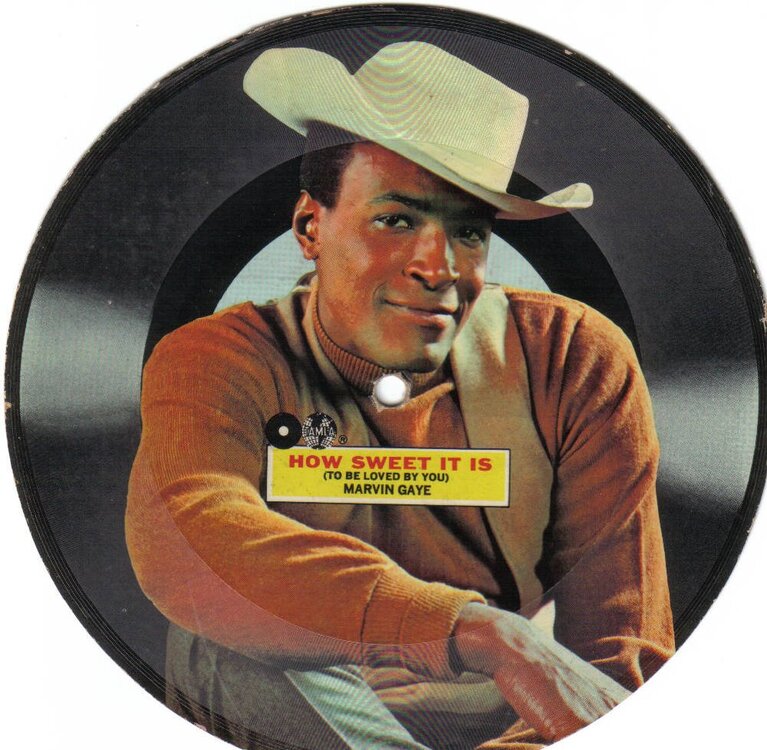