You have to ask yourself, have you felt pain? 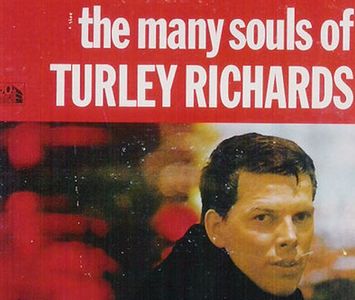 "You have to ask yourself, have you felt pain?" says Turley Richards "Ask that about African American's back then and the answer was clear And me, I can tell you that the blues visited my heart and soul every single day of my life and still do because as a blind man I've never seen my children "

Turley Richards has certainly known pain, and that comes through his music, but he s also positive, very funny, inspiring and committed to recording again after an absence of 25 years. ??'s made some serious money at points He's also drifted around the edge of major stardom all his life and with a new CD in the can he's bubbling over with enthusiasm for the music that first inspired him, but it's been a hard row to hoe After hearing his soul material I've become a huge fan in recent years and I spoke to him at the end of 2005 about his career and his remarkable life

Richards was born in Charleston, West Virginia At school he was an unusually talented basketball player and could have pursued a career in sport had it not been for a childhood eye injury that would eventually lead to blindness in 1969 He now lives in Louisville and has two children, Adam, 28 and Amber, 25 "I love them with all my heart," he says "We have a tremendous relationship and I'm so very proud of them " Pride is an enduring characteristic of this very polite and genuine man, maybe partly because of his determination not to be labeled or marketed as a "blind" performer, or maybe just because he's proud of his very eclectic and substantial body of work over the last 40 years

Despite having sold over 1.4 million records, with appearances on Top of the Pops (anyone got the footage?') and at the Royal Albert Hall, Richards failed to reach the heights of success that his good-looks and outstanding voice warranted. In a typical stroke of bad luck the hugely soulful I'm A Lonely Man, from the 1966 Columbia session was shunned by black radio stations that had been championing the track after Colombia released his photo to Billboard in a disastrous attempt to woo white stations Ironically, when Turley first started singing with three black friends and another white kid in the late 50s, he was taunted as a n****r lover and found it hard to get bookings Thankfully this type of bigotry has no place on the Northern Soul scene.

Since Cleethorpes in the mid 70s the Columbia barnstormer, 'I Feel All Right' has been leading a charge to the dance floor and is finally in the Northern Soul big league where it belongs. Also making waves is the 1965 R&B dancer, I Need to Fall in Love, on 20th Century, recorded with an audience in the studio. But these two gems barely scratch the surface of a career covering folk, jazz and rock that, but for confusion about where he fitted in, should have taken him to the very top

"I learned to sing in a little black church and even today black people love my singing," he says "Sure, they know that I don't sound black, but I sing black and as BB King said, the colour of soul is blue '

His first recording was for tri-state label Fraternity in 1959. "I had no idea what was going on," says Turley. "I was 17 and recording at King Studios, Cincinnati. The entire band recorded at the same time, live. There were no headphones and even if you messed up on the last bar everyone did it again. I dread to think what the stuff sounds like, I don't have any records today. I started singing R&B in Charleston with three black kids and two white fellas and we had a hard time for sure, from all camps. We did Drifters, Coasters and Midnighters material."

In 1964 Turley packed up and moved to New York. "I guess I thought it was a waste of time trying to achieve anything in Charleston, and with my sight worsening I was very driven. I'd visited LA but things were slow so I moved to New York with $87, my guitar and my Mother's blessing. Man, it wasn't what I expected.

"When I ran out of money I didn't know what to do, but I sure wasn't going home with my tail between my legs. In '64 I started playing in bars around Manhattan for food and pocket money supporting comedian Richard Prior. I'd sweet-talk the pretty girls and usually got lucky and they'd take me home, but I never lied. I'd say. Til sleep on the floor, the couch or in your bed but I can't make a commitment'. 1 lived with 13 different gals before the last one got me an audition and I was off and running.

Probably the most influential figure in my early career was Norman Schwartz, he was the manager that actually got things started. Then Paul Tannen, my producer, took over and got deals with Columbia, Kapp and Warner Brothers. Beyond that, there were not many people in the business that made me feel comfortable with who they were." 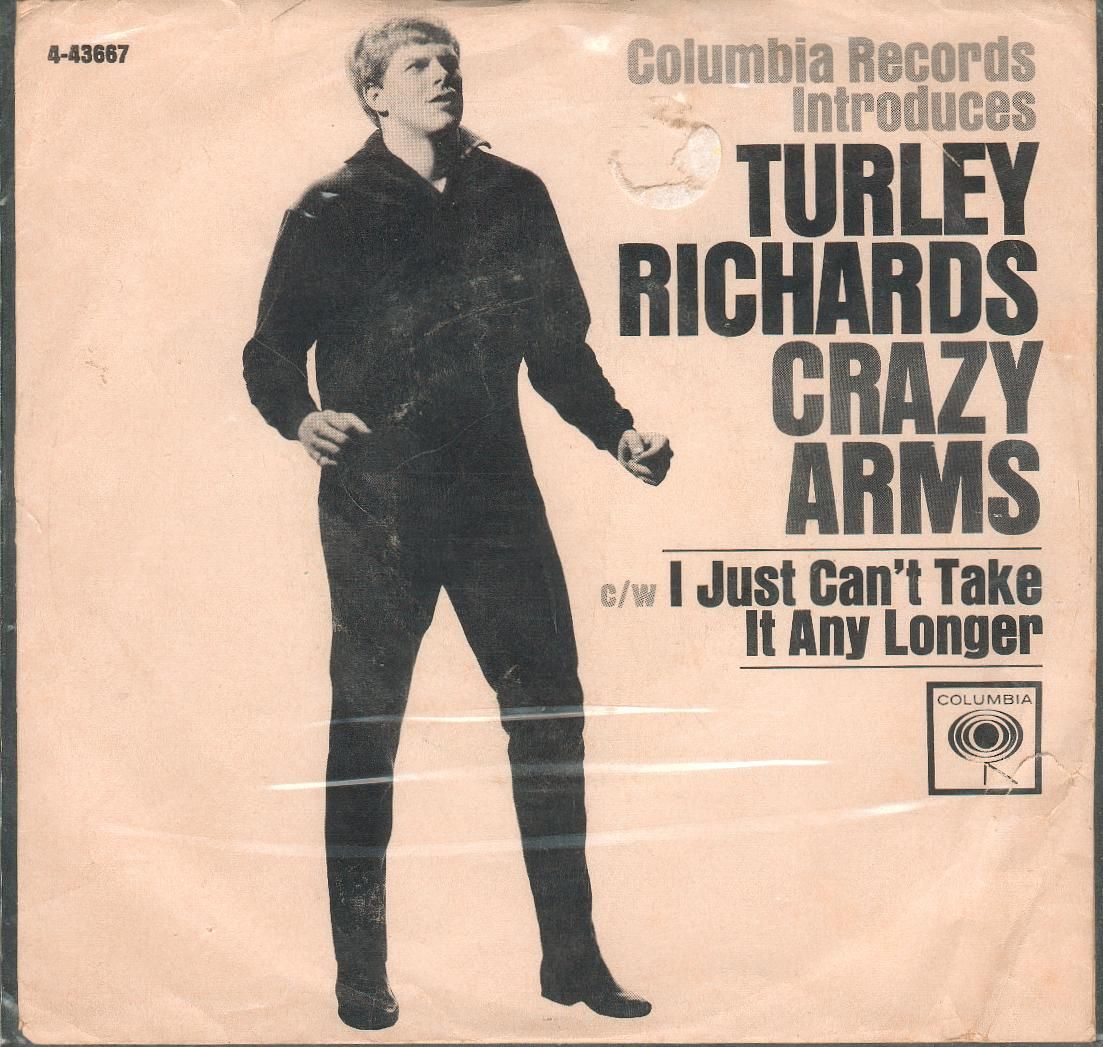 Tannen was the producer (PMT Productions) on the summer 1966 Columbia session that produced, I'm A Lonely Man, and I Feel All Right. Turley then revealed the amazing band that had been hired by Leroy Glover for the session. "I still had some sight then and when I walked into the studio most of the crew were black," he says. "I'd come from the beach and I don't think they were too impressed by my blonde hair, blue eyes and suntan when I arrived, but I won them over. Bernard Purdie was on drums, Chuck Rainey on bass, Cornell Dupree was the guitarist, piano was provided by Paul Griffin and backing vocalists were Nick Ashford and Valerie Simpson."

"NYC was very nice in the 60s, compared to the 70s and beyond," says Turley. "Being 6' 4" and 220 lbs. helped to keep me safe, but you didn't really have to worry too much. I saw lots of acts at the Apollo that never really made it and also Stevie Wonder, when he was just a kid." I mention to Turley that I could hear traces of Jackie Wilson in his vocal style. "Right on! I learned a lot of my vocal inflections from Wilson. I also like Clyde McFaddern, Chuck Jackson and Little Richard. I met Wilson Pickett at the Columbia studios and he was great too, but I didn't meet many other big soul acts face to face". Turley's favourite singers as a young man were Stevie Wonder and Ray Charles, leading him to joke, "Maybe I should have chosen different musical heroes!" 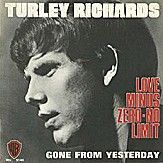 I asked if attitudes towards blindness have changed. "I think the better people understand it, the better they deal with it. I don't appear to be blind so it's very funny sometimes when I meet people for the first time. Someone on the phone actually said, 'You don't sound blind Turley'. My answer now after hearing this so often is, 'Up until now, you didn't sound stupid'."

I revealed to Turley that his Columbia record, I Feel Alright, started getting played at soul discos in the UK about 1975, and asked about his circumstances at that time. "I recorded, I Feel All Right, at Columbia on 52nd Street along with three other tracks. I had no idea that anything was happening in Europe with the songs that came out of that session. The entire band was made up of great black side men. I do believe that all musicians can forget about the colour. When someone is really good, we don't give a damn what colour they are, but society wants to always make something out of it. The stuff I recorded for Kapp was awful, that was because they didn't get my scene."

"When you guys in the UK were playing the track in 1975 I was in my third year of retirement," he says. "I was sick and tired of major labels wanting me to be like whatever singers were hot. They stole my R&B style from me and never let me go back to it. I was soulful, man they sank me with them. But I'm not bitter," he laughs, quite genuinely for someone who's been let down time and again by short sighted record label bosses. "The 20th Century deal was secured through the manager that I mentioned earlier, courtesy of number 13!" he adds.

I wondered if Richards' love of soul had somehow held back his chances of commercial success, after all he's signed deals with nine major labels in his career including Atlantic, Epic and Kapp. "Yes and no," he says. "I wasn't really writing that much although I did write, I Need To Fall In Love. I think my problem was the fact that I could sing just about anything. I had an unusual five-octave range and could do everything. After I went blind, I was pushed into the folk scene but I don't think the labels had a clue what to do with me. At one time, they felt that I was a possible blind guy that they could sell as 'sexy'. That's when I quit for about four years."

Career wise the 70s and 80s were a series of all-too-familiar brushes with stardom that didn't quite come off. According to Turley a six-album deal with Atlantic, brokered by Mick Fleetwood, fell through when Ahmet Ertegun took the decision not to proceed with the deal when sales of the first record were short of the target by just a few thousand albums. There's some really interesting background to this story but I don't fancy meeting Atlantic's lawyers across a US courtroom.

I finish by asking him what the future holds. "I've just finished a new CD 'Back to My Roots' and I'm going to put some samples on my website. I'm always writing. I've written over 600 songs and one day, if someone records one of them and has a hit, I will be ready to give all the producers all the songs they can handle. I'm also a vocal coach and I produce some of the local bands or solo singers. If they are good enough, I will take advantage of what contacts I still have, but, unfortunately, I've not found that one act that I feel can get to the next level. But I'll keep trying, it's what I do." Just before closing Turley demonstrates his great wicked humour by explaining the meaning of his 1970s rock LP, Therfu which is regularly on ebay. Fill in the blanks, **therfu****'!

Not all black music is soul. Similarly, in my opinion, not all soul music is black. The very essence of what I call Northern Soul is the lack of colour and the presence of soul, and Turley Richards has bucket loads of the stuff.

The Esquires - How Can It Be - Bunky

The Explosive Dynamics - A Whole Lot of Love - Lemco