Now and again a Soul Club comes along and it becomes an instant success and goes down in history, never has a club ticked so many boxes than our latest find. It took over two years to find, but well worth the wait, we are 100% sure you will agree. So from the same team that brought you The Festival Hall, Soul on the Edge nights we proudly present The Bowden Rooms - Cinnamon Club, Altrincham, Just off the M56/M6

The Cinnamon Club will bring the best sounds in Northern Soul to your ears every 1st Friday of the month, 4 times a year. The very first one will be held here ‪on Friday November the 1st 2019 (8pm to 1am‬).

The original Soul on the Edge team - Paul Kidd, Stephen Connolly and Ian Wills (former Soul on the Edge DJs) @ The Festival Hall in Alderley Edge, along with two top draw guest DJs will be bringing to the Cinnamon Club the same format that was such a huge success at The Festival Hall. With packed crowds listening,loving and dancing the night away with all the top sounds from all the decades from the very start of the movement to the top tunes played at today’s venues.

The sounds will come from - The ‪Twisted Wheel‬ (Manchester) - Wigan Casino (Wigan) - Top of the World (Stafford) - Tony’s Empress Ballroom (Blackburn) the list goes on, if you loved theses venues you will never want to miss one of our Northern Soul nights. Once more all the music is played on original vinyl 45’s to which this amazing venue deserves, nothing but the best.

Time to get you bag and dancing shoes at the ready and pencil in ‪Friday the 1st of November‬. Yet another night never to be forgotten and at £5 entrance there has never been more value for money on offer anywhere.

More information to come including details of our first guest DJs plus The Cinnamon Club booking service, local hotels, mini busses laid on from Stockport, taxi services and bus routes. 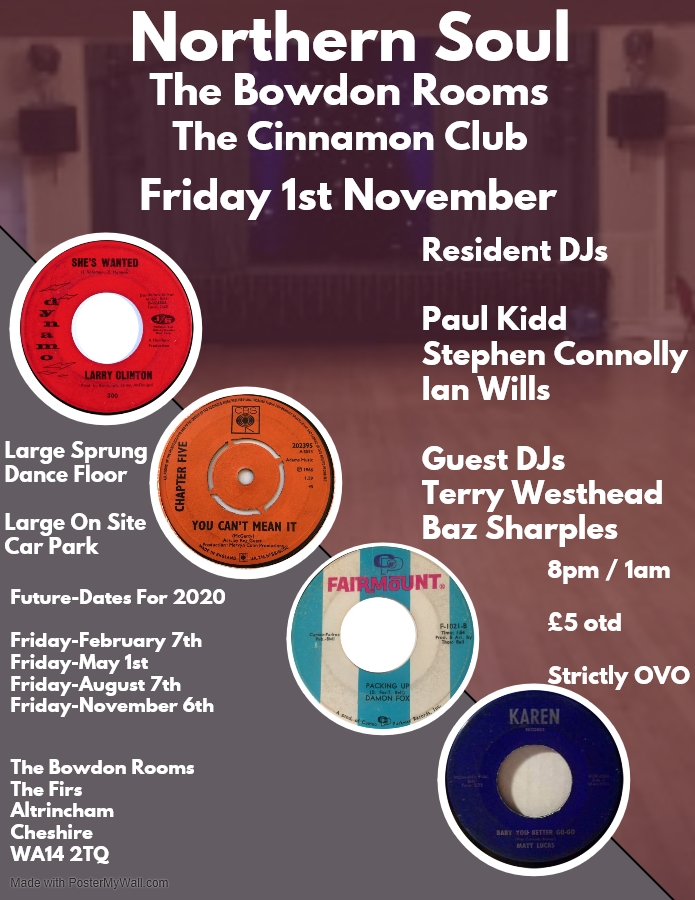