Movin On A Groove

Going to this soul music event? Use our Club RSVP feature

I know it is only five minutes since our last event but the January one is only a few weeks away. For this, we have Dale Byers as our guest who will be spinning some fab music for you all. Dale has been good enough to send over a few lines explaining how he got involved in the soul scene.

"In 1975/76 I came across the sounds of young America (Motown) while my parents listening to their favourite sound which was good old ‘Rock n Roll’. The Motown sound just grabbed me, so my story began and have been an avid Soulie ever since.

My Tastes have changed over the years, as have the genres which are now available to us all on the Soul scene.

Attending the early Lowton Civic, I could not get enough of real RnB spin by Viv Coulson. Viv played his tunes in one of the smallest of rooms you could imagine.

Venues that I attended which have left a lasting impact were Middleton all-nighters due to the main room playing underplayed oldies, but the highlight of those Middleton all-nighters was the small room upstairs run by two of my best, and fondest friends, Carl and Maria Willingham, (not only on the soul scene - we have stayed very good friends ever since). Carl and Maria played fantastic tunes and the many DJ’s and collectors that attended were second to none.

The other and fabulous era at the time of Middleton was the fabulous York Soul club run by Tony Hatfield and Tracy Haigh. Again, some super nights with the best music and DJ’s around and I will always grateful them all for introducing me to some fabulous music. It was a great time music-wise for me.

I look forward to posting some records that I have been so lucky to have collected over the years and certainly looking forward to playing them out at the Ivory in January". 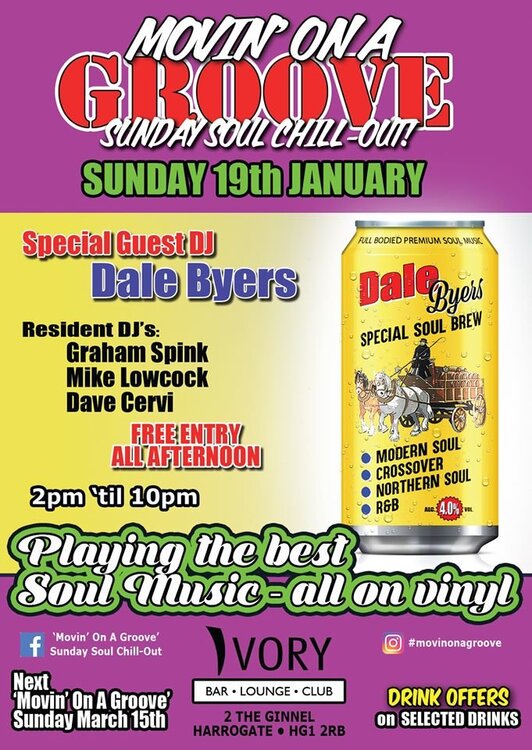 Hit the down arrow below to switch 0 reviews / 1 comment