is it spin inn 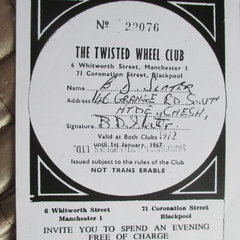 Just down the steps with the window on the Right - Covered With " In Demand Singles " sellotaped on 1   I Can just Visualize The DEMO in the center - A.B.C. White Label " Looking Thru The Eyes Of

I don't know if anyone else on here used to go to Brighton in the seventies but if you did, this - something I did back around 2008 - may be of interest. https://www.mybrightonandhove.org.uk/plac