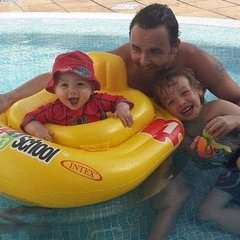 I once had a Detroit record on Puff Records, that was found in USA, and taken to The UK.  Rod Shard got ahold of it (either it had been found by him or Dave Withers on a USA trip).  He sent it to me,

Had a Clangers LP as a kid so think I win.

I once saw an Oldham Tinkers album in Rochdale but then I don't get around much.