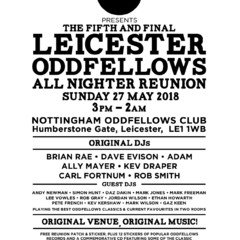 Just wanted to let you all know there is an Oddfellows reunion booked in Leicester at the original Nottingham Oddfellows Club venue that the nighters were held at in the 1980's. The date is bank holid

Does anybody out there remember LEICESTER ODFELLOWS allniter?? I can't believe the amount of people that look at me like i've lost the plot when i ask if they went there!! Ok ..... lost