We Got A Sweet Thing Going On Volume 3

The third volume of our “We Got A Sweet Thing Going On” series returns with yet another esoteric mix of sweet and group harmony soul.

This compilation features both sides of The Scott Three’s in demand rarity “Running Wild (Ain’t Gonna Help You)/Gotta Find A New Love” they are joined by fellow Georgian Robert Montgomery (check out his two recent Soul Junction 45’s) with his previously unissued recording “Love Song About You”.

The City of Brotherly Love is heavily represented in this compilation with acts such as The Toppiks with both sides of their desirable Larsam 45 “Give It A Chance To Grow/Surrender” and their previously unissued track “Win All Your Love” a recent release on a Soul Junction 45 (SJ1009) as the flip to The Cooperettes version of the same song, a double dose of Philly soul heaven.

One side of Bobby Banks solitary Gil label release “Read It And Weep” is followed by Music Machines unissued sweet soul gem “Imitation Of Life”, originally recorded as the flipside to their Red Coach label outing “By The Hair On My Chinny Chin Chin” then inexplicably dropped in favour of an instrumental version of “Chinny Chin Chin”!

The sound of Philadelphia continues through The Delagates Of Soul’s emotionally charged “Lucky Guy I Am”, The Four Thoughts “Plain As The Nose”, The Coalitions “Nothin’ Left 2 Do” and the all girl group The Jonesetts Cougar records double sider “Once I Had A Love/Stop Look Listen” With older sister Karin Jones later going on to record the respected solo album “Under The Influence Of Love” (Handshake Records).

Chicago group The Flairs are featured with their recently reactivated mid tempo dance floor favourite “You Got To Steal It” the flipside of their Rap 45 “Where You Live” is also included a great song that needed to come out of the shadows of it’s more illustrious A-side.

Detroit outfit The Holidays are represented through two of their own productions the uplifting dancer “I’m So Glad (That I Met You)” and their, oh so soulful “This Is Love (A Little Understanding)”.

The final act featured is Cleveland Ohio’s The Donations with their mellifluous “I’m Going To Treat You Good” a group that later became World War III who recorded the currently very apt “If The Bomb Falls Were All Going Together” !

Listen to Cd preview above 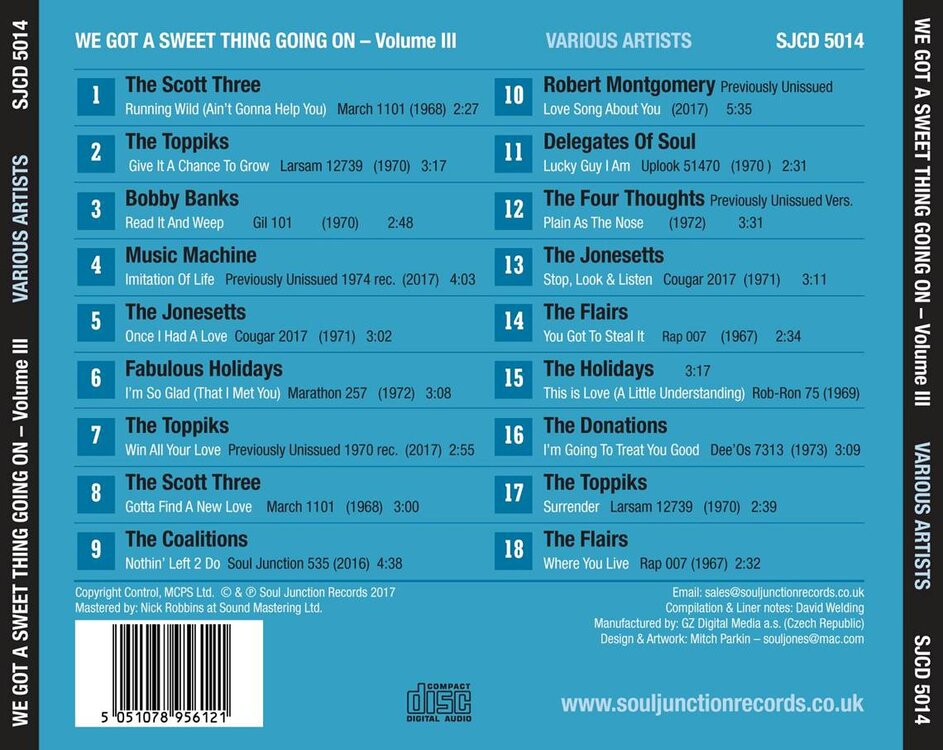