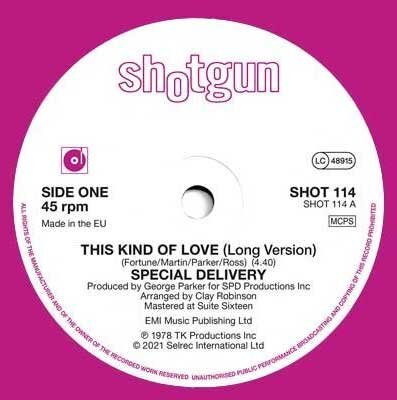 SPECIAL DELIVERY:  THIS KIND OF LOVE (Long Version)/ l'VE GOT TO BE FREE THE LONG VERSION

The group evolved from Act 1 who recorded for Spring Records from 1973 under the direction of group leader Raeford Gerald, a prolific writer and producer. Terry Huff became lead singer in 1975 and they joined Mainstream Records where their records were credited to variations of 'Terry Huff & Special Delivery'.

Their third Shield single, issued in 1978, was a radio edit of 'This Kind Of Love' which, sadly, cut out the album version's spoken section by Chester and Veronica. It wasn't released in the UK where the song became a minor 1985 pop hit for Phil Fearon & Galaxy.