Fiorucci Made Me Hardcore

note - refreshed the video location as the youtube has been removed

The work, a video, is a compilation of found footage from the 1970s, 1980s and 1990s underground music and party scene in the U.K. It follows on the path of several previous appropriative art video artists and critics have remarked on its similarities with William S. Burroughs' technique of cut-ups, a literary technique whereupon a text’s sentences or words are cut up and later randomly re-hashed into a new text.

Through “found and original footage of discos and raves across Britain during the 1970s, 1980s and 1990s” he “chronicle the rites of passage experienced by successive generations of British (sub)urban youth”.

Fiorucci Made Me Hardcore patches up several videos of young people dancing, singing and partying. It starts with the disco scene of the 1970s, touches upon the Northern soul of the late 1970s and early 1980s and climaxes with the rave scene of the 1990s.

One underlying soundtrack plays during the whole video, giving a sense of unity and narrative to the video. At one point an animated element - a bird tattoo image - appears as if released from the hand of a dancer, then carried into the next shot finds its place on the arm of another of the film's nightclubbing subjects.

Some dance moves are played on loop for a few seconds, some are played in slow motion. Writing about Leckey’s first few video pieces, which in addition to Fiorucci… include We Are (Untitled) (2000) and Parade (2003), the art critic Catherine Wood said that they “represent the human subject striving to spread itself out into a reduced dimensionality. His subjects dance, take drugs and dress up in their attempts to transcend the obstinate physicality of the body and disappear in abstract identification with the ecstasy of music, or the seamlessness of the image.” 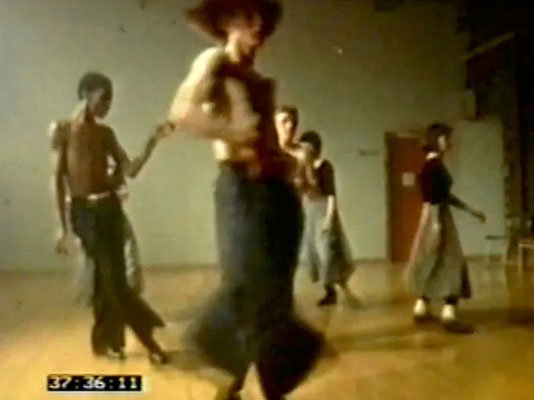