founder member of The Impressions and more

Sad news reported in the forum by Soul Source member John Smith (Roburt) of the passing on of Arthur Brooks once of the Impressions  (1958–1962).

In 1957 the ‘Roosters’ who under Thomas’s advice changed their name to the perceived hipper sounding ‘Jerry Butler and The Impressions’ recorded the Richard Brooks penned “For Your Precious Love” which appeared on the Vee-Jay, Falcon and Abner labels.

“For Your Precious Love” became a hit reaching #11 on the US pop charts and #3 on the R&B charts respectively. In the wake of the groups third Abner release ‘The Gift Of Love/At The County Fair’ (1023) Jerry Butler left the group to pursue a solo career being replaced by former Rooster Fred Cash the group then reverted to the name of just “The Impressions”.

In 1959 following the release of ‘Lonely One/Senorita I Love You’ (Abner 1025) Vee-Jay decided to drop the ‘Impressions from their artist roster although they continued to release their material.

In the same year The Impressions signed to another Chicago independent label, Bandera records. Where they recorded a solitary release ‘Listen/Shorty Got To Go’ (Bandera 2509) the line up on this release was Curtis Mayfield, Fred Cash, Richard & Arthur Brooks and Sam Gooden who sang lead vocals.

A further solitary Impressions release although recorded in 1960 later appeared on the New York based Swirl label in 1961 ‘Don’t Leave Me/I Need Your Love’ (Swirl 107). Don’t Leave was a R&B screamer similar to The Isley Brothers ‘Shout’ while the flipside ‘I Need Your Love ‘ was an earlier version of a later Impressions ABC recording.

The line up on this release consisted of Richard Brooks (who sang lead vocals), Arthur Brooks, Fred Cash and Sam Gooden. Curtis Mayfield at that time was touring as lead guitarist for Jerry Butler.

Later in 1961 and reunited with Mayfield the Impressions signed for ABC Paramount scoring an immediate a R&B hit with “Gypsy Woman”. In 1963 following the Impressions sixth ABC release ‘Sad, Sad Girl And A Boy’ brothers Richard and Arthur Brooks left The Impressions due to a disagreement over Curtis Mayfield’s continued insistence on writing all the group’s material.

Following their departure from the Impressions Richard and Arthur moved around several U.S towns with Arthur meeting his first wife Everlyn in Baltimore. They later pitched up in Detroit where their older brother Harrison and his family lived.

Harrison, Arthur and Richard became involved with the tiny independent Card label, where their song writing and production credits can be found on the labels only two reputed releases.

Richard and Arthur together with old Chattanoogan school friend Emanuel Thompson then embarked on a brief flirtation with the Motown label under the group name of the Showstoppers, a planned release ‘Old Time Loving/Little Girl You Had Your Chance’ was recorded but never released. Emanuel Thompson then chose to return home to Chattanooga with Richard and Arthur remaining in Detroit.

The Brooks Brothers then signed to Taylor and Turners Detroit Sound Studios, where amongst other production projects they recorded the northern soul outing ‘Looking For A Woman/Two Great Lovers’ for the studios subsidiary label Tay (501). The line up on the Tay release featured the three brothers Richard, Arthur and Harrison as well as Harrison’s son, Harrison Jr (both Harrison’s are now sadly deceased). 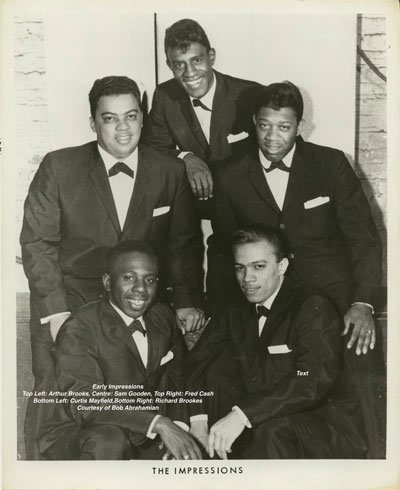