double header from The CommandS

I am pleased to announce the second release from Big Man Records, due out late summer, a wonderful double header from The Commands - 'A Way To Love You' B/W 'I've Got Love For My Baby' BMR 1002 following on from BMR 1001 from Bull & The Matadors- 'A Part Of My Life'B/W 'MY Babe' which was very well received and pretty much sold out.

The Commands tracks have been licenced from the NUMERO GROUP (USA) and are taken from Dynamic master tapes the San Antonio, Texas based label owned by Abe Epstein which produced some prime Texas Soul served rare in some instances. 'A Way To Love You' was also recorded by The Volumes on Inferno and featured on The Shades Of Blue Impact album, this Duke Browner song is knocked out the ball park by The Commands who glide through the song with beautiful harmonies at a pace taylor made for the dance floor, first time UK 45 release which is a fabulous version and very hard to find on the original Dynamic release, the flip was released on Dynamic Records also 'I've  Got Love For My Baby' is possibly the hardest Dynamic release to find by the group on the original 45, a beautiful song that instantly pulls at the heartstrings.

The label has been designed to the Dynamic label specs with the label name changed.

NOW TAKING PRE ORDERS - THE RECORD IS DUE FOR RELEASE LATE SUMMER, PAY PAL AS FAMILY AND FRIENDS TO AVOID FEES,  INCLUDE ADDRESS WITH ORDER PLEASE, PAY PAL bicknellmark@aol.com

This release will be a limited run as in number of copies available, again release due out LATE SUMMER. 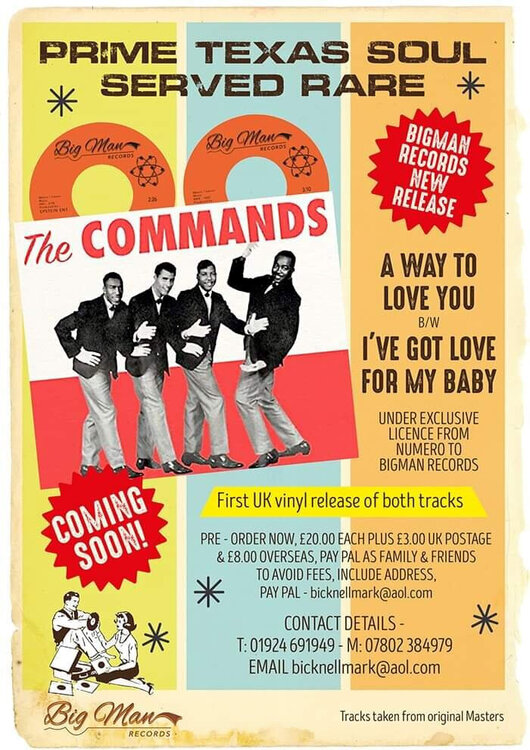 This is now closed for further comments