It has been long held belief that Silas Phifer died a number of years ago in a nursing home; the latter is true but it now appears that the former was not accurate.

His family contacted me recently to inform me that Silas actually died on11 February 2013 aged 69.

Silas Jackson Phifer III was born August 30, 1943 in Wilmington Delaware. He was educated in the Wilmington Public School system and earned a scholarship to Juilliard School of Music to study classical music. He declined this opportunity as he wanted to be a singer and chose to pursue a record deal to try to make it big quickly. 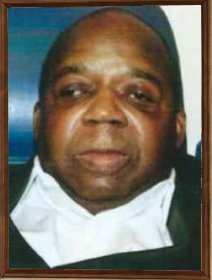 Silas married in 1960 to Joan Jones who he had met in school. They had 3 children before divorcing in 1970.

His first attempt to break into the recording industry appears to have been with The Mellow Fellows who secured a deal with Candi Records, a Wilmington based record company, owned by James Chavis who ran his business from his home on Vandever Street. In addition to Chavis Records, James also had the Candi and Barvis record labels releasing an eclectic mix of R&B, Gospel and Garage recordings.

This release date of this initial 45 is unknown but is likely to be around 1964. The song “Gotta Find My Baby” (Chavis 1023) was written by James Chavis and credited to Silas Phifer and The Mellow Fellows. The flip “You Gave Me Love” featured Edwin Johnson as the lead. Despite appearances in venues across Delaware and Pennsylvania the record failed to sell enough to launch Silas into the big time.

This didn’t deter Silas from returning to the recording studio a few years later to try again. The group were now known as the Mello Souls. The recording session is believed to have taken place in 1967, at Frank Virtue’s studio on Broad St, Philadelphia. The songs were published by ‘Mary Hill Music’ named after Frank’s wife.

Released on Mello Records (967) the Silas Phifer and George Lewis composed “We Can Make It” flipped with “I Got My Pride” would appear to have sunk without a trace before being rescued by Mark Dobson for the benefit of the UK rare soul scene.

Joan has no real knowledge of what Silas got up to with his musical endeavours and has no recollection of his groups or any of the records that he made. The same is true of his children and wider family members. The majority of what they now know has only been discovered since his death.

Silas married again in 1974 after meeting Geraldine Roberts at the Salvation Army where he had volunteered to help with emergency housing. They had one son, Silas Jackson Phifer IV, who was born exactly one year after their wedding.

Silas worked at the Delaware Hospital and at various other odd jobs whilst trying to forge a musical career but despite his efforts it was never meant to be. Geraldine recalled that Silas had been in a group in the 70s, who had recorded an album, but she couldn’t recall their name and had never owned a copy of the record.

Silas was a former member of New Pentecostal United Holy Church, where he sang on the choir and studied to be a Deacon. In addition he was a community activist and worked with former Mayor Jim Baker. He also worked for radio personality and President of The Afro-American Historical Society Harmon Carey.

Silas lived life to the full and played things fast and hard. This lifestyle eventually took a significant toll on his health and as a result he required nursing home care for the last 12 years of his life.