Thank you to The Blue-in-Green Blog for permission to reproduce this article.

Nick Pride & The Pimptones formally introduced themselves through their debut album on Record Kicks in 2011, ‘Midnight Feast of Jazz’.  In itself the album was an inspiring concept record: a soul band’s interpretation of jazz music – and it’s a concept that served the group well.  ‘Rejuiced Phat Shake’ subsequently followed in 2014 which was the group’s first collaboration with Légère Recordings, and saw them flourish within their natural aesthetic as a soul and funk band whose music was brought to life by an array of excellent vocalists.

The Newcastle-based collective have now seized the opportunity of a third record as a chance for further reinvention...  so in an extension of their excellent collaboration on ‘Rejuiced Phat Shake’ (‘Why Does My Man Got To Be So Tough’), the powerful vocal force of Beth Macari boasts the distinction of being the first vocalist to be paired with The Pimptones for a complete album.

And hopefully it’s the first of many!

Whether you’re watching the video for the album’s lead single, ‘Gotta Leave The Lady Alone’, or hearing her purely exquisite vocal on ‘Go Deep’s opening number, ‘What The Heart Wants’, you can only hope to have a lot more from Beth in the future, as well as this match-made-in-heaven musical union.

It was alluded to earlier but Nick Pride & The Pimptones never make the same album twice.  They don’t need to.  They’re a band brimming with creativity and confidence so while we take the time to bask in ‘Go Deep’ as a solid representation of their proficiency and skill, we can’t help but ask the question… “What will they do next time?”

IMRAN MIRZA: 'Nick Pride & The Pimptones' are amassing such a body of work now: do you still feel the pressure of releasing new material?
NICK PRIDE: I really do want to release as much material as possible, I'm a little bit addicted to it! I remember when I was first getting into music and discovering new bands. I would hear a song that I loved by a band I hadn't heard of, so I would search out which album it come from, then listen to absolutely anything else I could find by that band. It's exciting when a band has loads of weird and wonderful things for you to discover, so that's what I want the Pimptones to be like. ‘Go Deep’ is our third studio LP, but it's really our fourth album as we recorded another CD called ‘It's The Pimptones’ back in 2009 before we had a record deal. Then on top of that there is an album of remixes called ‘Remixed Feast of Jazz’ from 2012, plus last year we released an album of bootlegs and mash ups and also a 40 minute live radio session which are both on our Bandcamp page. So there is plenty of Pimptones music for people to discover.

How did you hook up with Beth Macari, and what prompted the decision to collaborate on a whole album?
Beth was one of many, many singers who guested on our previous album ‘Rejuiced Phat Shake’. We worked for a while with lots of different vocalists but with Beth it really clicked and suddenly felt like a band! So it was just a natural development for us to keep working together. Before now, the idea of not settling on a permanent singer was that I was very keen to clearly establish the identity of the band based on the sound of the whole band and the tunes we played. I wanted people to buy into where we were coming from rather than just focusing in on one aspect of it, usually the lead vocals. Now that we've done that, I felt like we were ready to settle down with a regular singer.

Can you talk a little about what went into the making of 'Go Deep'?
Each record we make is usually the opposite of the previous one. So ‘Rejuiced Phat Shake’ covered a lot of genres and had loads of guest musicians and singers. With ‘Go Deep’ I wanted to focus in on writing strong soul songs and keep it all in house. I wanted a strictly retro deep funk vibe. I actually wrote the material on this record much faster than I normally do. We recorded it really quickly too, most of it was live. I think that that sense of urgency gives the recording a lot of energy.

What made you decide on 'Go Deep' as the album's title?
I decided on the album title before I'd even written most of the songs.  It's a nod to Deep Funk which was the sound I was going for, but it's also a broader point about not being superficial. As a songwriter, I wanted to think a little more deeply than I usually do.  I liked the name so much that I even managed to get it into one of the lyrics: "Do these feelings go deep?" in the song ‘Don't Break Her Heart’.
But with me there is always a play on words hidden somewhere, I love that type of humour. So ‘Go deep’ is a bit of an American Football reference. It's a bad joke but it makes me happy! 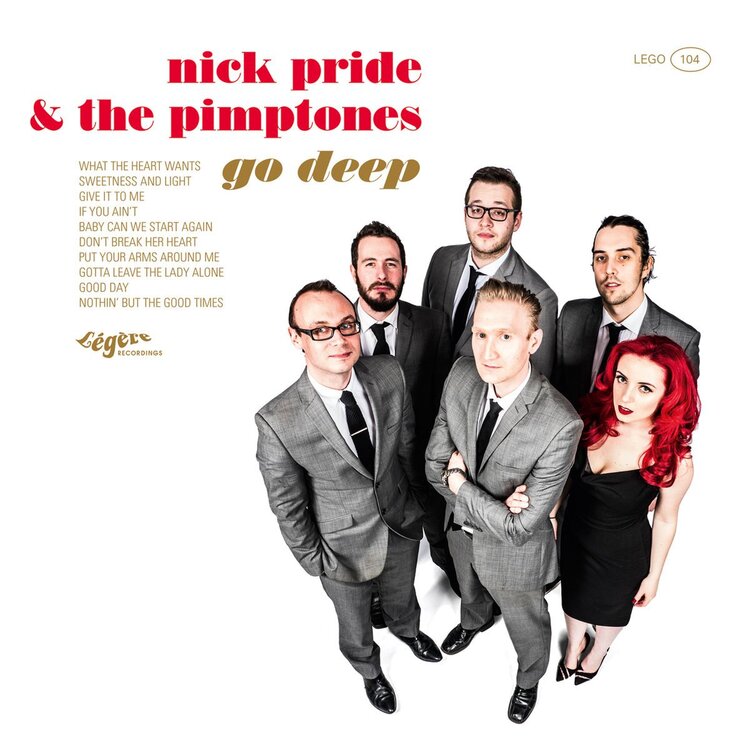 Was the creative process of writing and producing different with Beth on board?
Actually the process was pretty much the same as it's always been, I like to write songs on my own and have them mostly complete before I play them to anyone, so I was bringing finished songs to Beth to learn which is how I usually work. But it was fantastic working with a regular singer and writing a whole album specifically for that one person. It meant that I could write to her strengths and we could work together on getting the details right. Beth delivers some real knock out performances on this album, I think that's the confidence which comes from knowing the tunes inside out and playing regularly with the band. You don't really get that when someone is just sitting in temporarily. For me, that was the big difference.

There's an excellent video for 'Gotta Leave The Lady Alone': what made you decide on that as the lead single?
I actually had no strong opinions about what should be the lead single, which is very unusual for a control freak like me!  But it was an instant and unanimous decision by the label and I think they were dead right. The reaction to the song has been terrific! The video was a very happy accident. I was having trouble thinking of ideas for a video when the opportunity to film a live session came up at just the right time. Maybe we were taking a bit of a risk by actually performing the song live on what would be the official video, but I was much happier just playing instead of trying to make a video with a story line. I'm a terrible actor!

You deliver new concepts with each new album: any thoughts yet as to what a follow-up to 'Go Deep' would sound like?
We certainly do try to do that. Yes, as soon as any album is finished and sent off to the label then I'm already thinking about the next one. I already have very clear ideas about how I'd like to record it. With ‘Go Deep’ I set myself a very strict deadline to write and arrange all the material. I really enjoyed that pressure and I'd like to repeat that approach, but on the other hand, I'm also thinking about going the opposite way and really taking my time. So who knows?! I actually have a lot of material written for a side project which I've been keen to do for a long time but life and other albums keep getting in the way! Maybe this would be the ideal time to focus on that.

We've been so lucky to get the opportunity to travel to some wonderful places to play our music, that's something I'll always appreciate. All thanks to some amazing support from some crazy lovers of music scattered far and wide. We did some incredible gigs in Spain last summer including a festival amid beautiful mountains, but then also found ourselves back in the UK recording in an underground nuclear bunker.  I loved them both. We're always releasing new material and making new contacts, our live show is getting better and better but I feel like our best work is still ahead of us, which is pretty exciting!

See the band's video for 'Baby Can We Start Again' here.