“Looking back, I’m really proud of what we achieved in the 1960s” reflected the late Nelson Lemmond of The Tempests. “We made some great R&B. And played with some great talent too. We never performed with Otis or Wilson. But pretty much everybody else in between. At the end of the day though, things started to change. Otis had died, Martin Luther King had been assassinated. Civil unrest was everywhere and there was a militant atmosphere, even in the more progressive areas of the south. People ended up taking sides.”

This feeling echoes previous comments made by various session musicians and singers through the south, including those at Stax and other studios where white and black musicians and singers previously rubbed shoulders. The 1970s marked now dramatically changing times in the south and throughout the USA. The cusp of the two decades witnessed political unrest through Vietnam War and internal racial tension, demonstrated through riots in Detroit and other urban areas of the north. The musical landscape was also changing. Soul music was evolving. Hard hitting funk became the new musical voice. In the south, artists such as Chicago, Allman Brothers band and southern rock were now popular choices with white radio listeners. Other events happening around the country would also affect R&B programming. Nashville’s WLAC was changing its format. John Richbourg, the purveyor of soul who influenced so many local radio stations across America and including the Carolinas, was to leave in disagreement with the new radio policy. Within a couple of years, the final nail in the Nashville R&B coffin was displacement of the black community to make way for new urbanisation projects, dispersing black culture and music.

The beginning of the new decade saw a dramatic wane in popularity among the white record buying audience for soul music. There would still be clear pockets where the R&B industry would thrive, but these were primarily in the cities of the north and the west where the symbiotic relationship between funk and politics existed. In the south studios had their own issues. Socio-political evolution, revolution, and demand for racial identity bled through musical directions and created a true cultural divide. Bridges built via integrated bands and musicians through the mid to late 1960s were largely burned. Many small white-owned studios of the south would turn their focus to country music and southern rock.

There were some exceptions of course. To survive in the industry, independent studios did have to cater for new musical styles and artists but some, like Charlotte’s Reflections Sound Studios felt it was foolhardy to discard relationships with previous key industry players and artists from the black community, and would still be worth of keeping one eye on the residual R&B market.

All lay quiet for a few years between the last Smash 45 and the next release to appear under The Tempests name. In the interim period, the Branch brothers took up session band and production duties at Reflection Sound Studios on South Boulevard.

Wayne Jernigan was the studio’s creator. He had previously enjoyed popularity and some financial success as the drummer with Ernest Tubbs’ country band. Travelling on the road however had put a major strain on Jernigan’s relationship with his wife, so they took the plunge and moved east from Nashville to Charlotte to start anew, with plans to build a studio. Reflection Sound Studios opened in 1969. Jernigan initially struggled to get studio off the ground recording music only. It also become a place for hire for commercials, jingles and film audio tracks at least until business momentum secured its survival. Paul Scoggins, owner of Paul’s Lounge on the same street which featured several local and national acts, joined forces with Wayne as a silent partner with Jernigan’s production company. Ultimately the studio didn’t save Wayne’s marriage, but the facility would enjoy more than forty years of steady recording success via R&B and mainstream artists such as James Brown, Whitney Houston and Kenny Loggins. Probably its biggest commercial association was in much later years when Georgia college band R.E.M. would work on their Murmur and Reckoning projects which would soon shoot them to global fame. At that point the studio had long since been upgraded to new premises on Central Avenue.

Back in the early 1970s, Wayne Jernigan would perform multiple roles at the studio including management, production and as session musician, but realised a team of similarly talented individuals was needed for the studio to function effectively. With that, Roger and Mike Branch came on board as sessions musicians and also to learn some production skills along with Don Strawn, ex-engineer from Arthur Smiths’ studio.

The late Steve Calfee, guitarist, singer and songwriter with the band Lost Soul who had recorded Secret of Mine and I’m Gonna Hurt You for Raven Records a few years earlier, remembered his time there:

“About 1972 I was performing in a band that was supposed to become the back-up guys for what eventually became The Intruders, the R&B group. That bit didn’t work out unfortunately. Anyway, we went to Reflection Sound to do some tracks for a demo, and to add tracks for a guy called Ronnie Arthurs, who I believed performed and recorded as King Arthur. He was repairing a boat behind the studio for Paul Scoggins during his down-time to pay for the sessions. Wayne Jernigan was our engineer. Roger Branch was in and out at various points. The studio was located right on the highway at the time. As you walked in the front door there was a hallway, a waiting area with some couches and a chair or two. The control room was about twelve by twenty feet and looked out on the studio floor. Across the south end there was a raised stage area along the wall and the main studio floor, with baffles for sound isolation.”

The Cannonball song You Keep Telling Me Yes which enjoyed some popularity on both the beach music and the early northern soul scene was recorded at Reflection Sound Studios. Songwriter and Cannonball member Joe Crayton Clinard Jr. had some professional dealings with both Roger and Mike:

“Roger was always around the studio. We recorded three tracks there as Cannonball. I think he may have been working the board with Wayne Jernigan on No Good To Cry, Sunny Day Today and possibly You Keep Telling Me Yes, though that was recorded a year later. Everything thing was quick in and out in those days to save money. We were on the road when the strings were put on by Duke Hall.”

Jeff Ayres was on the inside: “I recorded at Reflection Sound in ‘74 with Roger. I was probably twenty years old at the time and knew very little about the professional recording process. The thing I remember most was the vintage 414....or at least vintage now...and how much I loved the sound of that mic. Also remember sleeping under the console while Roger was mixing one of our tunes at three or four o’clock in the morning. Does it really take that long? I found out in later years ...it really does take that long!”

Marshall Sehorn, who was originally from North Carolina, and industry partner Allen Toussaint were using Reflection Sound as an interim facility to record some of their own label artists and to edit pre-recorded material whilst waiting to finance their Sea-Saint Studios project in New Orleans. Roger already knew Sehorn and Toussaint through an introduction some years earlier by a Smash representative during promotion of The Tempests recordings. Ron Henderson and Choice of Colour, Wilbert Harrison, Eldridge Holmes and Aaron Neville were among those artists.

A characteristic of Reflection Sound was the multi-talented nature of its studio personnel and artists, as demonstrated by the latter-day discovery by the UK northern soul scene of Choice of Colour’s Your Love recording for ABC APT. The song was co-written and produced by Roger Branch. Washington-born lead singer Ron Henderson (ex-singer with The Orioles, The Spaniels and The True Tones), would not only record his own material with Choice of Colour but would also be employed as backing singer and writer for other artists.

The studio would attract other artists from neighbouring states to utilise the facilities. Arthur Freeman was one example, originally recording Played Out Playgirl years earlier on the custom label Regal in Florida. Freeman would re-record it with better quality production at Reflection Sound. Jernigan was in the habit of shopping demos around of their in-house productions to other labels, but for this recording struggled to find an interested label. Reportedly a desperate result of a financial deal with a local adult movie cinema owner, the 45 appeared first in 1971 on the ultra-rare Asta Arts imprint, then received a much wider distribution shortly after via the long running Nashville label Excello.

Local black singers were represented at the studio by Louis King, who previously appeared as King Louie with the Court Jesters on ‘Doc’ Johnson’s Wilmington Mockingbird label (which also featured The Generation’s version of The O’Jays Hold On). King had most likely been brought to Reflection Sound by Scroggins due to his appearances as a popular act at Paul’s Lounge. On these recordings Roger’s backing band would bring horns and a funk groove to the proceedings to support Louis’ competent baritone vocal.

What was effectively the Reflection Sound house rhythm section adopted the name of Backyard Heavies, for ensuing Scepter releases in 1971 and 1972. Consisting of Roger (guitar), Mike (keyboards), Stan Cecil (keyboards), Mike Russell (bass) and Paul “Mickey” Walker (drums), the band recorded the competent funk instrumentals Soul Junction / Expo 83, and Chitlin’ Strut / Humpin’ ; released as respective 45s. One final recording, Just Keep On Truckin’ was released on Hot Line, a subsidiary of the Cutlass label and essentially a Branch-Sehorn collaboration. Neither the Scepter nor Hotline 45s achieved any particular commercial success. However latter-day hip-hop producer Pete Rock and artist Kanye West would acknowledge the Backyard Heavies through sampling elements of Expo 83 in their respective works The Basement and Runaway.

Copyright E. Mark Windle 2019, 2020. Excerpt from The Tempests: A Carolina Soul Story, available exclusively from A Nickel And A Nail. 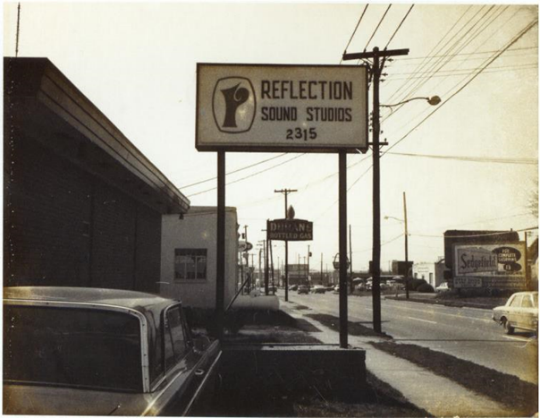 Mocha and Cream: Global Records.
R-E-S-P-E-C-T Woman's Got Soul!
The There's That Beat! Guide To The Philly Sound - Review by Mark Windle
The Tempests