a journey into Northern Soul obsession

In anticipation of Peckham Soul’s upcoming 'Together' event with Belle and Sebastian's Chris Geddes, Together resident DJ Craig Jamieson was lucky enough to grab an interview. Belle and Sebastian are one of the UK's most important independent bands, picking up Brit Awards, Mercury Prize Nominations and Lifetime achievement awards along the way. But soul music has always played a role in their music. A journey into Northern Soul’s obsession – Chris tells the tale of his first Stax compilations to serious record collecting; of Glasgow’s infamous Soul scene and how Northern Soul helped shape the sound of Belle & Sebastian. Read on for further tales of Northern Soul redemption.

C.J : What was the first soul or Northern Soul record you bought?

C.G The first soul things I got were probably fairly generic 60s hits compilations, probably on second hand tape or CD when I was at college in Colchester, or in first year at Glasgow. I definitely had a tape that had Percy Sledge, Sam and Dave and I think some Aretha, so probably an "Atlantic hits” kind of thing.

The first specifically Northern thing I remember getting was a compilation on Charly called “Up All Night: 30 Northern Soul Classics”. They used to have piles of them in Fopp for £5, but it was totally great. A lot of big Wigan tunes on it, some of which were pretty easy to pick up on original 45 once I got into that, but some serious rarities as well, like Sam Dees and Sam Fletcher.

Or it might have been the Goldmine compilation “Out on the Floor” which featured that track, of course as well as The Snake, Seven Days Too Long and a couple of more Garagey things like Mitch Ryder and The Human Beinz. I remember a DJ playing a couple of those tunes after a mate’s band’s gig in Colchester, being really impressed and buying the album soon after. Of course these days I’d think “how lazy, playing multiple tunes off the same comp” and turn my nose up, which goes to show you judge stuff better when you don’t have any baggage.

After that there would have been more Kent compilations, reissue 45s, and maybe the odd original thing at record fairs, UK issue Motown and so on, and from there into the world of postal dealers’ lists through adverts in the back of Record Collector magazine and addresses that Andrew Divine hooked me up with.


C.J : Did Glasgow have a big Northern Soul scene and what were the first nights that you went to that played Northern Soul?

C.G : I started going to Divine at the Art School when I was at University, maybe around ’94 or ’95. Andrew and Alan would play some Northern stuff in amongst other things like 60s moog and sitar records, Beatles and Stones hits, mod jazz, funky soundtracks, even some hip-hop and acid house. A lot of folk who went dressed quite 60s, wearing vintage stuff you could get from places like the Virginia galleries.

The first specifically Northern Soul night I remember going to was called Goodfoot which was on at place called the Rafa club when I first become aware of it, a social club for ex air force personnel, with model planes hanging from the ceiling and a picture of the Queen behind the bar. The folk who did the night were mods from Paisley, a few years older than me. A bit wild but really cool guys. The night got more popular and moved to the students’ union at the Caledonia Uni by the park, where the big hall made the records sound great.

It was a similar crowd to the art school, mostly students rather than older folk who’d been on the soul scene for a long time. I went down to all nighters at the Ritz in Manchester a couple of times, and even though it was amazing seeing the proper dancing, hearing DJs like Richard Searling, Butch and Soul Sam playing, and getting the proper all nighter vibe with the record stalls and so on, in a lot of ways I preferred the atmosphere of the nights in Glasgow, where the crowd was younger, and hearing the music as if it was new rather than with any nostalgia attached to it. And of course now I’m nostalgic for those days.


C.J : Mary Love’s ‘I’m in Your Hands' is comped on the band’s Late Night Tales Volume 1, and the vibes - that quintessential Northern Soul instrument, is featured on tracks such as ‘You Don’t Send Me’ from Dear Catastrophe Waitress. Has Northern Soul played a part in the sound and musical approach of Belle & Sebastian?

C.G : Around that time it was definitely something we were all into, to a greater or lesser extent. There were definitely a few occasions when the whole band were out either at Good Foot or Divine. Stuart and I had conversations about how it would be great to make records like the ones we were dancing to. He had a few Kent compilations and I remember there being a tune on Wand he really liked, it might have Chuck Jackson “Hand it Over” or maybe The Groove “Love It’s Getting Better”.

We kind of had a go with tunes like “Dirty Dream #2” and “There’s Too Much Love”, but we never quite got there I don’t think. Those records have got a certain something, but they don’t exactly sound like sixties soul records. We maybe weren’t all quite on the same page, or prepared to work in the way that we’d have had to to really nail the sound. There’s definitely a lot we’ve absorbed from 60s R&B in terms of playing style and arrangement, how to move on chords and so on, and it was definitely that that inspired me to get a set of vibes which saw heavy use over a couple of records. The furthest we went down the road of trying to get that sound was a tune of Isobel’s called “Landslide” which we cut with Evie Sands on vocals when she came to Glasgow around 1999 or 2000 and we did a gig as her backing band.

C.J : With the band, you’ve both played and Dj’d around the world. Where’s the most unexpected place that Northern Soul rocked the floor?

C.G : Well, it’s quality music, so in a sense I don’t think it’s ever a surprise when a great tune does the business on the dance floor. Not that you can necessarily expect to play a set of your top rarities to a general audience, but something like “Ain’t No Mountain High Enough”, or “Tainted Love" for example, you could play anywhere. Especially at the moment, where things like the movie, and the popularity of a tune like Pharrell’s “Happy” with an obvious Northen influence, and the success of Sharon Jones, and Amy Winehouse a few years ago mean a whole other generation who have no nostalgia about Wigan in the 70s, or even Good Foot in the 90s are discovering the sound for themselves.

I did a good party after one our gigs in Detroit a few years back where I played all Detroit soul and techno. That was fun. But there’s hardly anywhere I’ve DJed where a good bit of soul music doesn’t go down well, from Japan to South America.


C.J : It’s such an enduring scene, what do you think is the enduring magic of Northern Soul?

C.G : Partly it is the sheer volume of amazing music. As you say you can listen for years and years and still keep hearing new things that blow you away. I’ve been listening to Ian Levine’s podcasts lately and each of them is three hours soul tunes, most of which I’ve not heard before, some of which are as good as any of the classics from the Wigan or Mecca days.

In a musical sense, it’s the naked emotion in the songs and singing. I love the combination of simplicity and sophistication in the production and arrangements, the way a lot of tunes might just be a simple two chord vamp for the verse but maybe have couple of lush major 7th chords in the bridge. The combination of gospel vocalists and harmonies, with jazz or R&B rhythm players and classical orchestrations gives a lot of scope for variety among records that are still all identifiably “Northern Soul”. But that wouldn’t count for much if the records didn’t grab your heart, and make your feet move.

C.J : We’re more than looking forward to your upcoming ‘Together’ date. What things can we expect?

C.G : As I alluded to above I like to play records from the full spectrum of Northern Soul, from early R&B type tunes, through classic motown style uptempo soul, funkier crossover, mid-tempo beat ballads, classics, things people might not have heard before, male and female singers, the odd instrumental, anything as long as it’s soulful and you can dance to it. Probably something that features one of those first compilations I got as well. 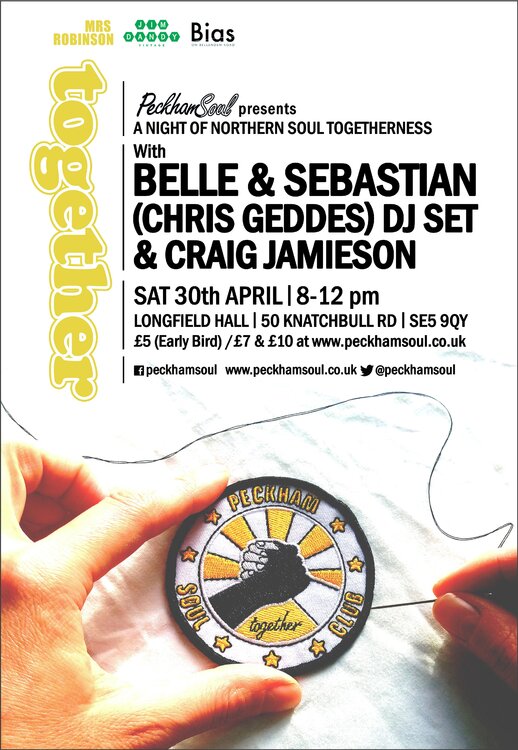