Born and brought up in Mississippi, Jimmy Ruffin was singing in his local church choir by the age of eight. He had a spell in the army before being signed up by the burgeoning Tamla Motown label in the Sixties and touring with The Supremes and The Temptations. His chart hits include What Becomes Of The Brokenhearted, It's Wonderful To Be Loved By You, I've Passed This Way Before, and - with Martin Ware and Glenn Gregory of Heaven 17 - The Foolish Thing To Do. He moved to London in 1970. His own show on BBC Radio 2 begins on Saturday 10 October.

When did you decide you wanted to be a professional singer?

I never wanted to be a professional singer. I wasn't ambitious - it was just that I loved singing. My father sang in a gospel group and I would hear him and my older brother and these teenage guys practising at our house when I was seven or eight and I decided I wanted to do that. Then later I heard Mahalia Jackson. We had no electricity in our home so I would hear records at other people's houses and at the local juke joint - a bar where you'd have gospel music on the juke box but also blues, and rhythm and blues.

How were you discovered?

I used to sing around the house and people could hear me - the windows and doors were always open. Then I joined the military and I was still singing gospel and R&B. When I was about 20 I started singing with a group touring the US service clubs in Europe. At that time I was going to make a career of the army and was about to re-enlist, when the woman who booked the acts said I should turn professional. We had little plastic recorders in the military so that you could send a message back home. I recorded myself playing guitar and singing Sam Cooke's She Was Only Sixteen. I played it back and darn if Ididn't sound better than Sam! We had a guy in our group used to play with a professional outfit called The Spaniards, and he couldn't sing worth a damn -I knew I sang better than him. So I began to think maybe I could do it. I went back to Detroit - my brother David was there - and Mary Wells heard me and she said go down and audition for Motown. Well, I didn't necessarily want to be discovered but I went and sang for Ronnie White of Smokey Robinson and The Miracles. He called in Ray Gordy, the wife of Berry Gordy [founder of Tamla Motown}. She heard me and she called up Berry and he came over. He rushed into the room, I sang and he was beaming and he said, "We'll sign him up and record everything he's got."

What was it like getting your first smash hit with What Becomes Of The Brokenhearted?

I'd been working for the Ford motor company around the time of the audition and I had a back injury that kept me off work. So I thought I'd use that year to see if I could make it as a singer. The first single, Don't Feel Sorry For Me, did okay. The second - As Long As There's L-O-V-E - was a smash in Detroit. Brokenhearted came out third and that was it. I didn't go back to the motor company, I can tell you that! But the pressure is incredible. A lot of people died from the pressure, including my brother David [singer with the Temptations before going solo]. Suddenly you're moving up in society, going to places you're not really prepared for - beyond your own race, culture and class, your own country. I was pretty well grounded, I'd got a philosophy of life from my grandmother. I'm an observer not a joiner, so I didn't participate in the drugs except in a minor way - I don't like being out of my mind. So I survived. I may not have had as much celebrity as people like Marvin [Gaye] but I'm still here.

What was it like taking part in the Motown Review travelling shows, with the likes of The Tempations and The Supremes?

Hard work. The only enjoyment was in the performing. There was a lot of learning the business, learning how to perform - Marvin Gaye never thought he was any good. I'd done it in the military so it was okay for me. In the early days with The Temptations you'd go by station wagon with your bags tied on top. There'd be six of us and we'd drive up to Baltimore then on to Washington and New York and Chicago and on and on. I could drive but I said I couldn't - man, I didn't want that responsibility. By the time I toured with the Supremes we'd progressed to going by coach. Well, Mary [Wilson] and Florence [ballard] and I went by coach - Diana [Ross] never took the bus. The problem there was that I was too good. They were headlining but I got the standing ovations - so they took me off the tour.

Who have you been influenced by in your approach to singing?

It's less to do with influence than with the kind of singer I admire. I was real big on the opera singer Mario Lanza, for instance, when I was growing up. I like all kinds of singers but especially the big ballad singers Sam Cooke, Bonnie Raitt's dad John - he sang Hey, You With The Stars In Your Eyes - Joel McCrea and Frankie Laine. Then there was Mahalia Jackson and a Mississippi group, The Five Brown Boys.

Do you still keep up with pop music?

Sure I do. I like all kinds of stuff - The Manic Street Preachers, All Saints, Celine Dion, The Fun Lovin' Criminals - I got a big range.

I moved because I was very popular in England and I'd benched my record company. I was too aware of the game and sometimes I didn't agree and I would say No so we didn't always see eye to eye. Plus I'm an ex-soldier, trained since the age of 16 to react aggressively in certain situations. In America those situations arise quite often. London is much more laid back.

How did your collaborations with the Bee Gees and Heaven 17 come about? And is there anybody you'd like to collaborate with?

I met Robin Gibb years ago - a really nice person, he was even more reclusive than I so we got on well. We talked a lot about working together, then suddenly with Saturday Night Fever they became so hot we couldn't work together until 1979. So we made an album, and almost immediately the record company went out of business. Then in 1984 I met Martin from Heaven 17 - he was producing a piece I was doing with Paul Weller for the striking miners.

Martin asked me to sing a song as a demo - he wanted to give it to a girl in France to record. And I decided to sing it so well he couldn't give it to her, he'd have to give it to me. And that's what I did. There are lots of other people I'd like to work with but the one I'm the biggest fan of - and I think she of me - is Aretha Franklin.

How do you feel about having your own radio show?

I'm very excited about it. It's easy for me to talk, I enjoy that. Since I was a young person in Mississippi people have been telling me I'd be great on the radio but I did that as a singer first. Now I'm looking forward to being a DJ, creating that sort of character.

What were the best and worst decisions in your life?

Will you take two best decisions? One was getting out of the army to be a singer - I'd intended to make the army my career. The second was NOT joining The Temptations. They were begging me to join but I wanted to be solo - I'd been used to having my own group, I didn't want to have another one. So then I spent time persuading my brother David that he should join them instead. 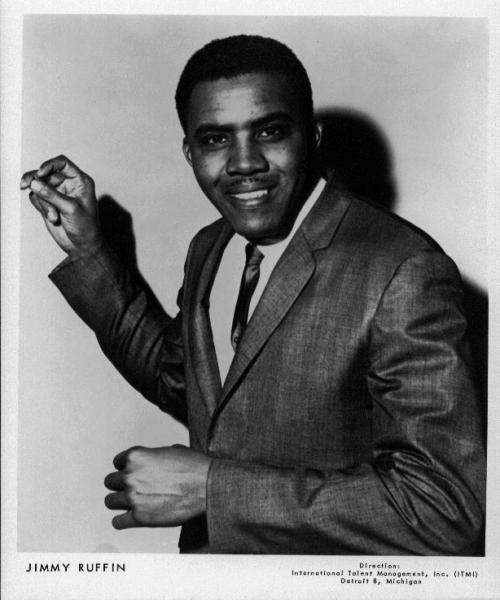