Tickets for the Richard Caiton concert are now available

We have decided to bring the ticket sales commencement date forward for PayPal orders because we had such a great early demand for tickets at the Spirit of Soul weekender at Scarborough last weekend.

So get your tickets early to avoid disappointment later in the year.

The interest in this concert is increasing by the minute; it's going to be a fantastic concert and Richard can't wait to get over to the UK to perform for his fans with our full backing band PUSH

November may seem a long way off, but our concert with Ann Sexton last year was on us before we knew it.

Tickets for the Richard Caiton concert are now available by PayPal at http://www.greywoodhall.co.uk/soulfulsessions

RICHARD CAITON LIVE AT THE WILTON

A soul night featuring a very special, one night only, performance from a southern soul legend direct from New Orleans, supported by our fantastic full eight piece band, including background vocalists, *PUSH*. The night will  have the same format as our previous Artist Nights. Richard will perform two 30 min sets featuring most of his released recordings, and a number of his Malaco recordings that never made vinyl. This will be the first time Richard has performed live with a full support band in the UK. We are so proud to have Richard performing at the Wilton, so come on guys, let’s give him a great welcome with a capacity crowd. 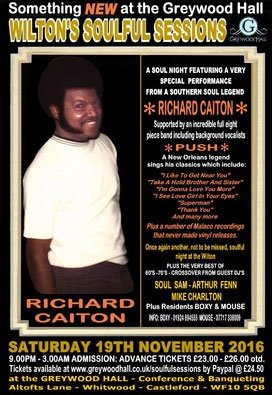