Titled  'A Beautiful Heart' this album offers a wide range of quality soul output,  you just  need to hit the preview clip below to get a taste of the quality that is on offer here. Alongside Paul the album features a whole host of Bay Areas soul singer and musicians, further down you can read Pauls own words 'The Story' (which does accompany the cd release and is included in the albums informative in-case leaflet) which details both the history and the current story of many of the tracks that make up this album. The  amount of bolded text needed says it all!

Available now via https://www.firstexperiencerecords.com/product/paul-tillman-smith-beautiful-heart/ at £12.00 and also available via all the usual suspects and also in digital versions

I basically started my music career as a starving avant-garde jazz drummer, 19 and almost penniless on the streets of New York’s Lower East Side in 1967. Jazz drummer Norman Connors and I were best friends and roommates for a while, the difference being he could run home to his momma in Philly to eat and my momma was way in California. Rent was like 40 dollars a month, and I was lucky if I had that. Kenny Dorham and Cecil McBee whenever I would see them on the streets always bought me food. Playing the angry experimental jazz of that era mainly with saxophonist Sonny Simmons, Pharaoh Sanders and Albert Ayler was definitely economically dangerous.

I left Oakland with bassist/percussionist Juma Sultan and first lived in the basement of singer Richie Havens house and there were cockroaches as big as my kneecap running around. Juma and I played with many of New York’s cutting edge Jazz kats including saxophonist Jackie McClean who asked me to join his band but I was beat down and ready to go home by then. I saw too many musicians doing bad and too many drugs around. Soon after I left Juma became Jimi Hendrix’s musical Guru helping Jimi to change the direction of his music. I was back home by then licking my wounds at my momma’s house. At Juma’s insistence Jimi bought me a plane ticket to come to Woodstock to play with his new band but I never caught the plane because I was afraid of Jimi’s music, a right decision at the time but a big mistake historically.

I soon recognized that I needed to figure out a better way to make more money if I was going to stay a musician, so I began writing music with lyrics, something I had started when I was 15 and stopped when I got out of high school. After high school I began playing drums in a hippy band called the “Second Coming”. Rock legend Steve Miller was also in the band and it was soon after that I switched to jazz. Thank goodness I learned a little piano when I was young. People still can’t figure out how a jazz drummer writes pop and funk tunes. The jazz community won’t own me and the funk community won’t own me. I’m caught in the middle somewhere. My jazz chops are up, however.

A couple of these songs represent some of my late ‘80s to middle ‘90s musical productions, updated where I had a chance to work with the late pianist-vocalist Bonnie Boyer and vocalist-pianist Rosie Gaines who both toured with Prince. I also recorded Sheila E when she was 15 and you can find that record in Japan somewhere. ---

Vocalist Skyler Jett, who also showed up at my house ambitious at age 15 continues to have an illustrious career and also took Lionel Richie’s place for a few gigs with the Commodores. Skyler is featured with Bonnie on a duet called “The Newsroom”, and that’s me doing the news broadcast on the tune. I had to get in where I could fit in. KCSM disc jockey and TV personality Sonny Buxton was paid to do the original news broadcast, my friend who never invited me to be in his Bay Area jazz picture that hangs at San Francisco’s main library. Everybody I ever played with was in it. I did enjoy playing at his Milestone’s Jazz club many times in a band with John Handy and pianist Bill Bell. God knows how many thousands of hours I spent playing in San Francisco jazz clubs many with Bobby Hutcherson, Merl Saunders, Woody Shaw, Alice Coltrane, Harold Land and Eddie Henderson, the list goes on. My voice over on “Newsroom” turned out pretty good. Anyway, Skyler Jett currently has a new single out entitled “Eternally” featuring him and soprano sax icon Kenny G that is real cool.

Also, third-year “American Idol” finalist LaToya London -- who everyone from the Bay thought should have won the damn thang -- sings two cuts and is also featured on the title track along with Donnie, Bonnie and Rosie, called “A Beautiful Heart”. The song also features another Prince bandmate, Levi Seacer Jr., on guitar, Nelson Braxton of the Braxton Brother’s who currently is in Michael Bolton’s band is on bass, and Michael Jackson’s last guitarist, Tommy Oregon, is the groove master on the track. The late Donald Tavie who was “lakesides” pianist is playing the keys, plus Lori Taylor, who is now sadly in a permanent coma suffered during childbirth, sings on the hook. Former Qwest recording artist and Wynton Marsalis bandmate Robert Stewart takes a mean sax solo. --

I am also showcasing what I believe to be Rosie’s first professional recording from 1981, a song titled “Summer Sky.” The song sounds like it could have been a hit back when I cut it. I should have put it on the market way back then. (No wonder I’m broke!) Rosie’s song is the bonus track at the end of the record and features Ray Obiedo on guitar. 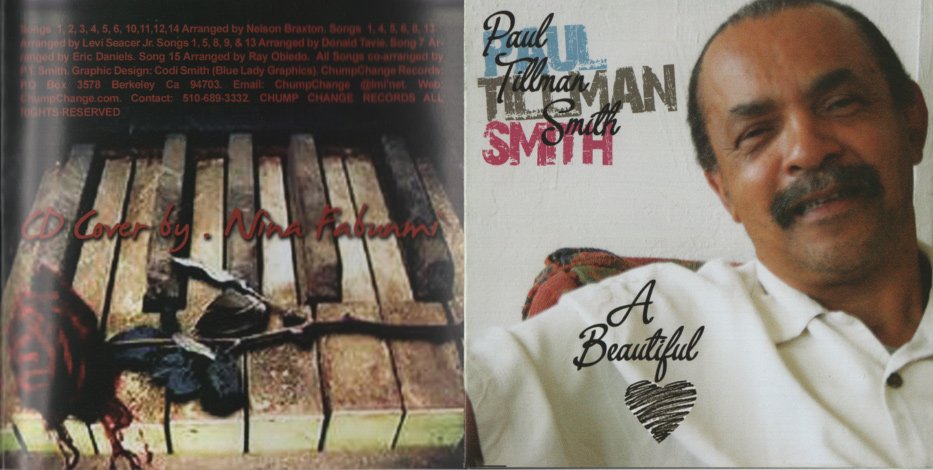 Of course, the greatest unsung vocal hero of the Bay area, third-year “American Idol” finalist Donnie Williams, is the main featured vocalist on seven of the 14 tracks. This is my fourth musical collaboration with him. Go to my website, ChumpChange.com, to see and hear Donnie’s other recordings with my band Park Place. Donnie’s sister Terrell “Tootie” Williams is featured on three tracks singing on an updated version of Rosie’s “Summer Sky”, a duet with Derick Hughes titled “Sweet & Wonderful” and on vocalist Kareem Muhammad’s scandalous love song “April Fool,” which is one of two song’s I didn’t write on my record.

“Precious Song” is the only Gospel song on my record. It is sung and arranged by church pianist Robert Collier, with added vocals by Donnie Williams. Sax man Vincent Lars, who plays unbelievably on the song, should have been famous a long time ago. The song was inspired and is dedicated to Reverend Jay Matthews who is currently the presiding Rector at the “Cathedral of Christ the Light” Oakland Ca.

I lastly would like to thank my Godson Derick Hughes a member of my seventies Bang CBS recording group “Bridge” for his great vocal arrangement of “ Sweet and Wonderful” a song he co-wrote with Bridge keyboardist Michael (Spiderman) Robinson while both were members of the Bridge band. Derick is currently the lead male vocalist with Roberta Flack and also spent time recording with Motown & Prince in the 80’s. Spiderman is now one of the most sought after keyboardist in the bay area.

I love these songs. Some are freshly cut and others are old tracks that were updated and newly arranged by two Bay Area musical geniuses Bassist Nelson Braxton and Guitarist Levi Seacer Jr. I am so proud to be able to put my name on such a lovely work of art. My daddy would be proud of me. 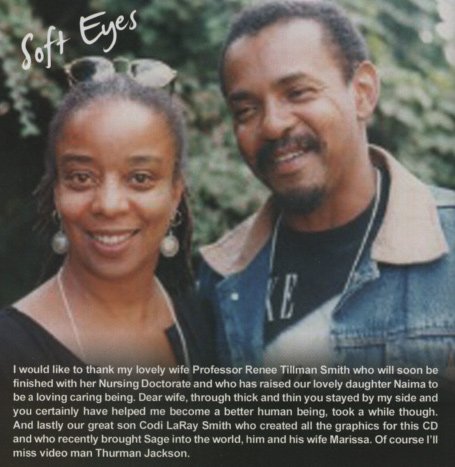