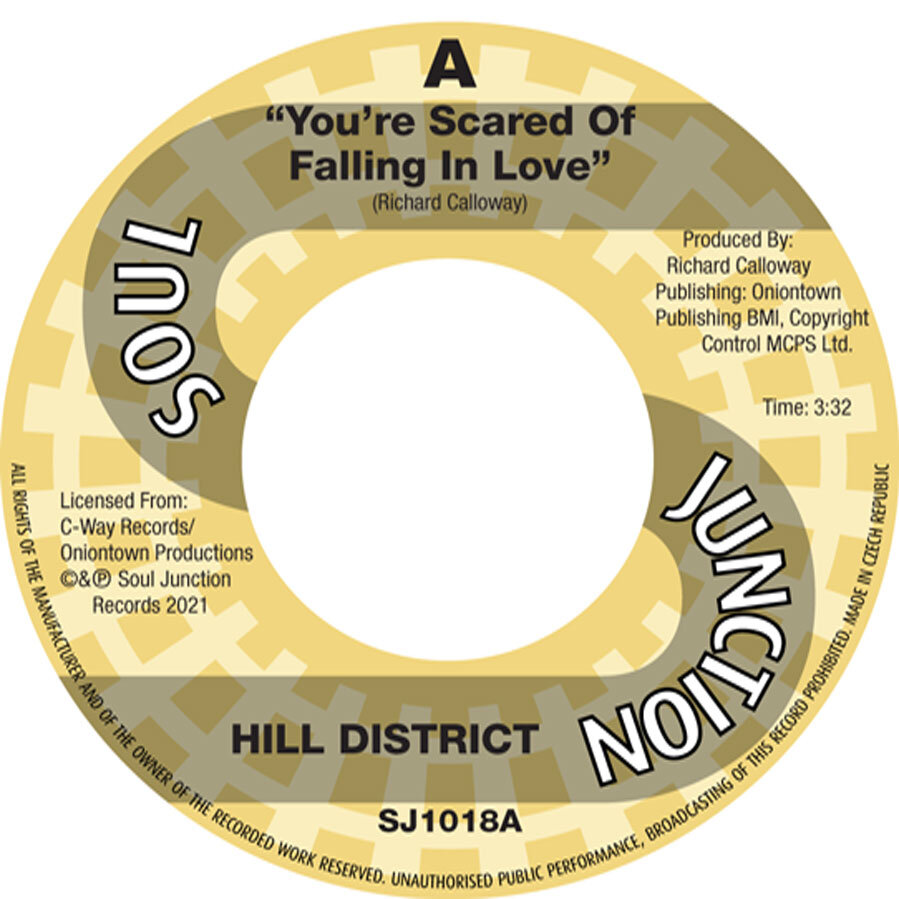 Two 70’s soul/Lowrider in demanders back to back

The Hill District were a group of working musicians assembled by bassist Walter “Sonny” Hughes who following one afternoon rehearsal session together the very same evening recorded their only ever 45 outing the somewhat elusive and now sort after amongst group harmony collectors “Your Scared Of Falling In Love”. The other group members were Sonny’s brother Richard Hughes (Lead Guitar), Anthony Law (Keyboards), William M. Standard Jr (Piano), Mark Smith (Drums) and Daniel S. Lee Jr (Lead Vocals). The groups name was taken from a grouping of African American neighbourhoods in the city of Pittsburgh P.A. locally referred to as ‘The Hill’. The recording session was held under the direction of record producer and song writer James Richard Calloway (A.K.A) Rich Calloway. Calloway would go on to release “Your Scared Of Falling In Love” on his own ‘C-Way Records’ label featuring a instrumental version on the flipside. Rich Calloway hailed from Uniontown P.A. with Uniontown being known affectionately by the local black community as ‘Oniontown’ the name which Calloway adopted for his publishing company. Unfortunately for the Hill District the final mastering of their song left something be desired (a scenario we’ve now rectified with our release) and as a result local Pittsburgh Disc jockeys refused to plug their song leaving their one and only 45 outing to fade into obscurity with the group members going their own separate ways to continue their careers as session musicians with other ensembles. Producer and lyricist Rich Calloway also continued with his own C-way Productions company later composing both sides of The Cleveland Ohio group ‘The Entertains’1975 outing for Steel Town records “Love Will Turn It Around/Why Couldn’t I Believe Them”. Calloway was no stranger to Cleveland having been earlier employed by Way Out Records owner Lester Johnson to compose the lyrics to Jesse Fisher’s “Your Not Loving A Beginner”, the songs arrangement’s being originally laid down by members of the Way Out group The Soul Notes, William Bell (A.K.A Bill Spoon), John Washington and Ricki Dannison under the working title of “I’ve Been Waiting For Your Love”.

Prior to the Hill’s District release Rich Calloway had penned and released a 45 single on another local Pittsburgh artist Richie Merrett. The 1973 outing You’ll Always Have Yesterday Standing By b/w “I Gave It Up” (C-Way 103). Merritt a professional singer who performed with several groups including The Electron’s on their 1968 outing “Turn On Your Lovelight (Shock 209) recorded his first solo outing on the Nashville Deltron label “Can I Get A Rebate/It’s Never Too Late” which he later released again on his own R.A.M label followed by two early 90’s outings, the modern soul favourite’s “Where Did I Go Wrong” and “You Got Problems”. Richie still performs today doing one off shows in between his solo performances aboard 7 Day Cruise ships travelling between Los Angeles and Sant Cabos, Mexico. “You’ll Always Have Yesterday Standing By” was later produced by Walt Maddox under the shortened title of “Yesterday’s Standing By” on his own group ‘These Gents’.

Therefore Soul Junction brings you two 70’s soul/Lowrider in demanders back to back for your delectation.